Sometimes, it is good to have too much of a good thing. For many of us, it's not enough to have ready access to our favorite pop music by XTC, The Beatles, The Beach Boys, Big Star, The Raspberries, Jellyfish, The Posies, The Monkees, The Kinks, The Who, The Animals, Elvis Costello, Nick Lowe, Rockpile, Abba and ... well... insert your favorite melodic pop-rock artist or band that is not on this list.  Folks like us thirst for new songs which carry the torch of rich melody, killer hooks, sunshine and a dose of good ol' rock 'n roll. Folks like us got excited when a band like Wilco came out with a near power-pop gem like "A Shot in the Arm."  We buzzed when we learned that ELO founder Jeff Lynne was going to start making new music again and when The Monkees reunited and put out their best album since 1968. Folks like us cried at the concerts when Brian Wilson performed Pet Sounds in its entirety and finally finished his shelved, once-lost masterwork, SMiLE. Folks like us get excited knowing Paul McCartney has a new album coming out this fall and has dropped a new single.  Folks like us wait for that moment when XTC's Andy Partridge issues his first new recording (two wonderful covers) in ages. 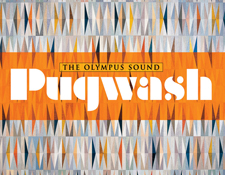 And...  some of us beamed earlier this year when we learned that Ireland's Pugwash was not only coming out with a new album (called Silverlake, which I reviewed) but also that more of their elusive-to-find but worth-the-hunt albums are being reissued, some for the first time on vinyl.

So, you are probably wondering right about now: 'just what or who is this Pugwash you speak of in the headline?' They are a quite wonderful rock band -- fronted by main songwriter and singer Thomas Walsh -- from Ireland which has gained not only a (so called) cult following but also gained the support of no less than XTC's Andy Partridge, ELO's Jeff Lynne and The Kinks' Ray Davies (all have had cameo performances on Pugwash albums!).  The newest Pugwash album was produced by Jason Falkner  (Jellyfish, The Grays, The Three O'Clock, etc. reviewed here recently).  Walsh is one of renown next generation musicians carrying the torch of classic pop songwriting (real verses, choruses and bridges plus hooks for days!). Be forewarned: serious earworms await you in the land of Pugwash. 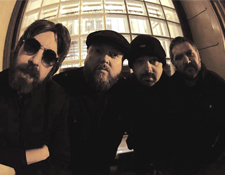 Today we are going to however talk about their 2012 recording called The Olympus Sound which may be the best sounding of the Pugwash reissues to be released this far (I reviewed Almond Tea and Almanac over the past couple of years in addition to Silverlake). In fact, it sounded so good that I reached out to the label releasing this album, Lojinx Records to find out what was different about it. Founder Andrew Campbell responded quickly with some compelling insights into why this 21st Century pop gem sounds so good, almost analog in feel:

"I attended the original cutting sessions at Abbey Road in 2012 and can confirm the mixes were digital files. However the mastering was analog and the mixes were run directly to the lathe, cut to lacquer. ie The vinyl masters were not printed to digital before being cut. Digital mix playback -> analog mastering -> lathe. We always cut to lacquer, never DMM (based on opinion/advice from Geoff Pesche at Abbey Road). The 2018 re-issue was pressed from the same stamper as the original pressing, at MPO in France."

For those of you who like to geek out on this sort of thing, the band posted a video on YouTube back in the day of them cutting this very master (click here for that). Pretty neat! Personal note: this is a somewhat similar approach my old band used (under the guidance of our engineer / co-producer Justin Phelps) when recording at The Plant Studios (aka The Record Plant) in Sausalito, CA back in 2003, a best of all worlds hybrid approach to modern music production. The results can be quite wonderful as it is on The Olympus Sound. 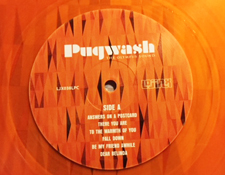 So far, some of my favorite tracks on The Olympus Sound are not only the rocking ones, but the soft pretty ones. The third song "To The Warmth Of You" features a lovely string quartet sounds and acoustic guitar; stylistically, this song could be part of an alternate universe track from XTC's landmark album Skylarking (think "1000 Umbrellas").  There are some epic rockers like "Fall Down" and "Here We Go 'Round Again" throughout, while the album opener "Answer From A Postcard" kicks things off on a jaunty jolly note. The Olympus Sound is one of those albums you can listen to start to finish and then put it on again and hear new things each time. And of course it doesn't hurt that Thomas Walsh's voice is just a beautiful thing, rich and round, an artist no doubt in love with his influences but carving out his own sound path.

Where can you get The Olympus Sound these days? I got my copy on a limited run from a Kickstarter campaign the band undertook this past Spring but if you write to the label (click here) perhaps if enough people write they'll issue another press. As it stands, the new reissue is already commanding some coin up on eBay. If you do spring for the new vinyl, know that it is pressed on nice 180-gram, translucent orange vinyl that is well centered and happily quite quiet.

The Olympus Sound is not on Tidal yet but you can find Silverlake there as well as its predecessor, the fine (and my entry point on the band) Play This Intimately (As If Among Friends). My review of the latter appeared here on Audiophilereview a few years back.