The new live DVD and Blu-ray and CD set featuring Jeff Lynne's ELO at Wembley Stadium in England is pretty fabulous. They play pretty much everything you'd want them to hear at a concert of this type - - essentially a "greatest hits" plus type show. The new incarnation of The Electric Light Orchestra which Jeff has assembled has been touring since last year and they are super tight. 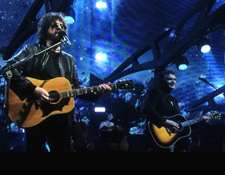 I saw them twice at the Hollywood Bowl in 2016 which was an amazing experience, if a bit short. That said, I'm very happy that the set list on this Wembley concert is significantly expanded, amounting to a near two hour entertainment experience.

The sound on Jeff Lynne's ELO - Wembley Or Bust is overall really good! The key thing about it which I'm enjoying about it -- and I didn't realize this until about halfway through watching and listening -- is that while this is a "brand new" 21st-century modern production, the audio has a vintage sound to it, very much in keeping with the sonic flavor of the original recordings (at least as I remember them -- haven't had time to compare-contrast just yet).  But really, this concert recording stands out with a remarkably round, surprisingly warm mix (even on the CD)!  Now, I have no doubt that this was a digital recording (because that's how these things are done these days for the most part at live concerts) but they clearly paid attention to getting the mix sounding like vintage ELO should sound. It is worth noting that during interview segments in the film Jeff makes a point that the band is in fact trying to reproduce all the parts he put on the records, so it stands to reason that they might want to mix it accordingly.  I find it refreshing to hear a 21st Century music mix that is not harsh and artificially bright.

Now, I know that some of you might argue that this is technically not an ELO concert and you have the right to your opinion. However, I will make two points and will try to justify them:  (a) Jeff Lynne's ELO is in many ways technically better than an original ELO concert of the past and (b) ultimately, this really is a Jeff Lynne concert first and foremost; he has always been ELO's chief architect, primary composer and overall driving force.

To the former point, I went back to check some of the earlier ELO concert DVDs such as the original 1978 Wembley show and was kind of astounded just how sparse and raw it actually sounds.... also, their tempos are very loose so they were decidedly not trying to reproduce the album experience at that time. The 2001 DVD from the aborted Zoom tour that year, a live studio concert from Los Angeles, is also surprisingly not as fine tuned as this current band is. This is quite a revelation as I used to really like that concert, but comparatively it sounds surprisingly unpolished! 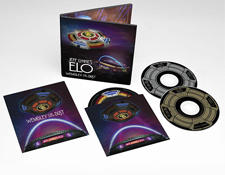 I consider this difference akin to Paul McCartney's current band vs. his 70s band Wings. They were good bands for the times, but there are many more sophisticated technical capabilities these days among modern musicians -- so Paul stepped up his game as has Jeff with this new grouping.  Actually, it is perhaps Brian Wilson whom we have to thank for this as he was one of the first artists I remember assembling an expansive studio-quality band in order to recreate the dense production of his Pet Sounds (and later, SMiLE) albums live in concert in the early 00s.

This whole concept is something of a two edge sword, I will admit. On one hand I do like it when a band is doing things a bit differently than the original albums -- that is one of the reasons I go to see artists live in concert. On the other hand, it sure is swell to hear these dense, complex arrangements performed live as Jeff intended them to be heard!  Given that this is 2017, and Jeff has the luxury and stature to pull in all the musicians and other resources needed to recreate his sound live on stage, why shouldn't he? He's already done a stripped down ELO in the past. Now its time to enjoy the Phil Spector-meets-George-Martin-meets-Brian-Wilson version of ELO!

Hard core fans will notice that original ELO keyboardist Richard Tandy is not present on this concert video (he was on last year's tour). Part way into the set, Jeff explains that Richard is recuperating after taking ill. Hopefully Mr. Tandy is healing well and will be back for future legs of the tour here in America next Summer. Get well soon Richard! 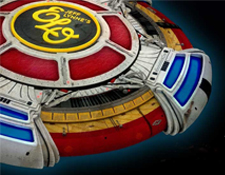 The packaging on Jeff Lynne's ELO - Wembley Or Bust is quite deluxe and the pricing is extremely fair -- two CDs and a Blu-ray Disc for about $23 is a great deal!  The sound is perfectly fine in a basic Stereo mix (via Dolby TrueHD) and the video quality generally looks superb. All in all, it's a lot of fun. You can also hear the music in standard resolution via Tidal (which sounds a bit more crisp and modern than the live CD and the Blu-ray, by the way).

I only have a couple little nits to pick. The first involves the CD which oddly fades out each track between songs, instead of letting the full concert audience ambiance flow as it mostly does on the concert video. Its an odd production decision, probably designed for the digital download versions which people sometimes will buy as individual tracks.  It is not a big deal but it does start to get annoying if you are listening to the CD in a start to finish manner.

More significantly, perhaps, is the lack of a surround sound track.  For those of you who know about my background having worked in the surround sound industry -- and my being a big fan of the technology --  you can imagine my disappointment that we didn't get even the most basic of immersion options on this release.

However... I quickly got over it because the Stereo mix is pretty great on its own, with fairly remarkable 3D presence -- the music really pops out of the speakers, delivering a nice sense of soundstage. So, ultimately, I'm cool with this -- as if my whining could do something to change it, right? In reality, most modern live concert DVDs tend to just put crowd ambience into the rear channels (as opposed to creating a genuinely immersive surround experience), so perhaps it's for the best that they just kept everything in basic Stereo, clean and lush, yet simple and rocking.

And indeed this band does rock and the production is quite spectacular.

Jeff Lynne's ELO will be touring America in the Summer of 2018. This concert recording will no doubt keep us satiated until we get to see them live at that time.  Thanks again, ELO and Jeff Lynne. We look forward to seeing all over the world!