A bunch of years back, I started checking out Bobby Darin's recordings.  I'd long had a Greatest Hits type collection including his breakthrough 1950s pop rocker "Splish Splash" and his later more mainstream pop hit, a cover of Bertolt Brecht and Kurt Weill's classic "Mack The Knife." Those songs were great, but I'd heard from friends-in-the-know that there was more to this seeming-teen idol type pop singer who left this planet far too young (at age 37 due to a congenital heart condition), so my curiosity was piqued and I started picking up his albums at various and sundry record stores, thrift shops and garage sales.  Bobby's albums are fairly ubiquitous as he was quite popular back in the day. He's sadly all but forgotten to the mainstream today, but hopefully that will change soon due to a new reissue... more on that later. 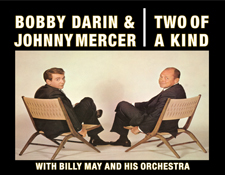 As I've dug down deeper into Bobby's catalog, indeed I have found some compelling recordings of fairly remarkable breadth and depth, including his rebellious (if you will) late 60s folk rock albums issued on his own label.  Along the way on my Bobby Darin journey, I came across an album he released in 1961 with none other than legendary lyricist, songwriter, singer and founder of Capitol Records, Johnny Mercer.

For some perspective on who Johnny Mercer was, for those of you unfamiliar with his name, a line from the Wiki may shed some light: "From the mid-1930s through the mid-1950s, many of the songs Mercer wrote and performed were among the most popular hits of the time. He wrote the lyrics to more than fifteen hundred songs, including compositions for movies and Broadway shows. He received nineteen Academy Award nominations and won four Best Original Song Oscars."

Among the standards of American music penned or co-written by Mercer include "Lazybones" (written with Hoagie Carmichael --writer of "Stardust"), "One for My Baby (and One More for the Road)" (with Harold Arlen) and "Moon River" (with Henry Mancini).

This guy had some serious writing credentials! There is even a fabulous documentary available on DVD about his life and accomplishments.

So the pairing of this young pop star with someone of Johnny Mercer's stature may have seemed at the time surprising to some but that kind of cross-generational effort has since become commonplace (to the point where even Lady Gaga has performed and recorded with Tony Bennett!). 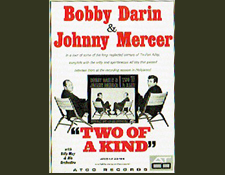 In 1961, it was probably a brilliant move business wise for both artists to get together.  Any hype from the collaboration would be moot if the synergy between the two artist didn't work. And that is where, going back to my finding this album at a garage sale somewhere in the last 10 years was quite a magical experience.  I was surprised to find that the music on this album -- in all its high camp, theatrical and as-Hollywood-as-Hollywood-gets splendor -- works really really well!

Over the years I have returned to this record more than many of Bobby's other records -- simply because its kinda fun! -- but never gave it much thought other than trying to turn a few friends on to the music (I've sent copies of this to my brother and some others along the way). So imagine my surprise to get a press release announcing that Omnivore Records is reissuing this album on CD with seven -- count 'em 7 -- alternate take bonus tracks!

There is an infectious and natural repartee between the two singers who seem to genuinely be having a blast together making the album, which was called Two Of A Kind.  Indeed, in the official press release announcing the reissue, they discuss this sense of fun that was captured on the recording:

"Originally based on an idea from Darin's long-time manager Steve Blauner (who also brought the world television series like Bewitched and The Monkees, and classic films like Five Easy Pieces and The Last Picture Show), Two Of A Kind put these great talents together, in an homage to the great Tin-Pan Alley composers, and mixed it with the vibrancy that only these three giants could achieve. Years later, he revived his idea with Grammy®-Award winning producer Cheryl Pawelski, working through the session tapes, to present a fuller picture of just how much fun Darin, Mercer, and May were having during the original sessions." 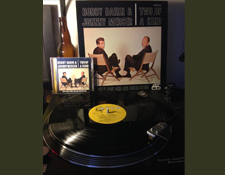 Where other duet performances like this were commonplace on TV variety show programs of the day -- a tradition probably hailing back at least to the days of Vaudeville -- and infamously amidst the boozy splendor of The Rat Pack's performances in Las Vegas, there is none of that awkward forced feeling on Two of a Kind. These guys sound like they'd been performing together for decades and are simply having a "gay old time" (to borrow a phrase from the theme song to The Flintstones cartoon series from the 1960s), hanging out together making joyful happy music.  Darin was in his 20s and Mercer in his 50s, so this was very much a spanning of the generations kind of event.

In writing this review, it was impossible for me to compare this reissue in an apples-to-apples sense as I only have an original Mono pressing of the vinyl LP record and this reissue is in Stereo on digital Compact Disc. But I will say that as far as enjoyment of the music goes -- and ultimately it is a matter of personal taste as to which is better -- I am leaning toward the Stereo version.  This is an early '60s pop record and while the Mono mix sounds big and punchy, the Stereo version on the new CD reissue is real good too, offering up a nice sound stage capturing the big band instrumental backing while the vocals remain more or less front and center.  I will pick up a Stereo copy of the LP next time I see one out in the wilds of record collecting!