Why Your Kick-Drum Doesn't Kick Part 8

In the last article of this series, I gave a short summary of what I had written before about loudspeaker drivers; about why no driver that uses a physical diaphragm can ever perfectly follow the signal driving it; about why the "overshoot" and "undershoot" that comes from imperfect diaphragm control can result in dynamic compression and other forms of information loss, and, finally, about some of the things that can be done to improve diaphragm control and make our systems sound better. Then I went on to say that horn speakers - a perennial favorite of audiophiles everywhere - incorporate by their very nature some of the exact same things that I had just mentioned as possible ways to improve our speakers, and the sound of our systems. 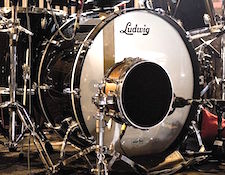 Horns that use "compression drivers" as their sound source have (as I declared to be a good thing) small, low mass diaphragms driven by an often disproportionately (for other driver types) large or powerful "motor" mechanism. And, whether they use a compression driver or, as for low-frequency horns, a full-size cone woofer, they all take advantage of the "megaphone" effect of an acoustic horn to amplify their sonic output by, typically, a factor of ten. This "10X" amplifying effect makes the normal horn speaker 10dB louder than its typical direct-radiating cone equivalent and means that, to produce the same volume level as that cone speaker, it will only need one tenth as much power. It will also require correspondingly less diaphragm travel, which will mean less diaphragm velocity and, as I told you before, make for four times as much available diaphragm control force for each time the diaphragm velocity is halved. (Remember that, unlike going to a bigger motor, stronger springs, reduced mass, or even a higher amplifier damping factor -- all of which are linear in their effect, reducing diaphragm velocity works as THE SQUARE OF the change in velocity, so its effect is always proportionally very much greater)

Pretty terrific, huh?  Yeah; even more than their good looks, that better diaphragm control and the great dynamic "punch" it can produce may be the real reasons why Hi-Fi Crazies have always loved horn speakers. Unfortunately, the advantages that horns have to offer come at what many people find to be too great a price: For one thing, horns are limited in their usable frequency range and, outside that range, tend to be both irregular in frequency response, and to suffer "time smear" (phase) distortion, and have a specific and calculable low-frequency cut-off below which they will not operate well or even at all. For another, that same limitation on frequency-response also applies to a horn's directionality: outside its optimum frequency band, a horn's directionality can be "beamy" or irregular and uncontrolled, and even within their optimum frequency band, the directionality of certain kinds of horns can be a problem: Circular-section horns, for example ― the ones that have a big round "bell" at the big end (the "mouth"), sort of like a tuba or a Sousaphone, and that are so popular in Europe ― have identical horizontal and vertical dispersion patterns, which can make for unwanted acoustical interaction with the floor and ceiling of the listening room. And ANY type of horn, to effectively provide even moderately deep bass response, must be either very long or have a very large mouth (final opening) or both, with the ultimate examples of this being horn speakers like the Klipschorn or the Electro-Voice Patrician, which had to be placed in the corner of the room and made that corner and its entire section of the room a functioning part of the low frequency horn.

Horn speakers aren't the only ones that solve some problems, only to create new ones. Two- or three-way speaker systems, for example, are one way to solve the problem of getting the full audio range from a single driver. They do that by separating the frequency spectrum into separate parts, each to be reproduced by a separate specialized driver. That's a good thing, but to do it they need one or more crossover networks and the crossover, itself, can be a major source of problems.

Full-range panel speakers are another possible solution, and, by their nature, they can also reduce diaphragm velocity and increase possible diaphragm control. Unfortunately, to GET full-range bass response from a panel speaker requires that the speaker be large, or even VERY large, and the bigger it is, the beamier and less useful it's likely to be.

Okay, so horns and panels need to be big to make bass; so what about those other speakers that have been specifically engineered to be SMALL to do it? The very first examples of small speakers that would make deep bass were those using the "acoustic suspension" principle invented in 1954 by Edgar Villchur and brought to commercial production by him and Henry Kloss as the Acoustic Research AR-1.

If a woofer is operated in free-air, with no baffle whatsoever, it will make whatever bass its motor and diaphragm are capable of but, because air-pressure-changes (sound) are created by both sides - the front and the back -- of its diaphragm, and because low frequency waveforms are bigger than the diaphragm producing them (any frequency below 900 Hz has a full wavelength greater than the diameter of even a 15" woofer) the front and back waves produced will meet and cancel at the woofer's edge, effectively losing all bass response below that point.

What a "baffle" (a wall, or even a large board or piece of plywood that the driver is mounted to) does is to effectively increase the woofer's diameter and thereby lower the frequency at which cancellation starts to take place. A baffle of "infinite" size would obviously be greater than the wavelength of even the lowest frequency ever to be reproduced, and would therefore, eliminate cancellation entirely. That's why a closed box speaker enclosure, which effectively keeps the front and back waves coming off the woofer from ever meeting and canceling, is called an "infinite baffle" regardless of its actual size. The size of the box DOES matter, though, and if the box is too small, the air trapped within it will act as a spring and resist the movement of the diaphragm. Edgar Villchur's brilliant idea was to take advantage of just that fact: Instead of using a large closed box (a la Bozak) so as to not hinder diaphragm motion, he used a very SMALL closed box and a long-travel driver with a purposely "limp" spider and surround and let just the spring effect of the trapped air provide the force to return the diaphragm to its center ("rest") position after either forward or backward movement.

Cute, huh? A good idea; and it worked, allowing the AR-1, for the first time ever, to produce bass in the 30Hz range from a relatively tiny box. Acoustic suspension woofers do have problems, though: First, their sensitivity is very low as compared to other types of woofer, so they need much more power to achieve any given output level. Second, in order to have sufficient spring effect to properly control the driver's diaphragm, the pressure differentials inside the box need to vary significantly between the diaphragm's "rest" position and when it's at the extremes of its travel. The only ways to achieve that are either by making the box (and its enclosed volume of air) VERY small (so that any change in the trapped volume of air created by the movement of the diaphragm becomes relatively very LARGE) or by making the amount of diaphragm travel from the diaphragm fully-IN (at the backward limit of its travel) to the diaphragm fully-OUT (at the forward limit of its travel) very large, or both. Otherwise, you've got no spring and insufficient diaphragm control. Unfortunately, if you DO go for the necessarily long diaphragm travel to produce significant internal volume differences, you are back to high diaphragm velocity, and you STILL lack control and wind-up with bass that's deep and possibly even loud, but "sloppy", with little "punch", and suffering the dynamic compression that this whole series of articles has been about fixing.

I have no specific experience with the Sunfire and other tiny-box-very-high-power sub-woofers, and I haven't done the math for them. Even so, I suspect that their problems might be similar to those of woofers using acoustic suspension. Who knows? Maybe I'll write about them in some future article.