Why Your Kick-Drum Doesn't Kick Part 7

In the last article of this series, I described for you some of the things that could be done to enhance the ability of a loudspeaker driver or the audio signal that powers it to control the driver's moving parts (the diaphragm and the moving elements of its "spider" and "surround") and thus avoid the dynamic compression, loss of "impact" and other information loss that can result from diaphragm undershoot or overshoot. 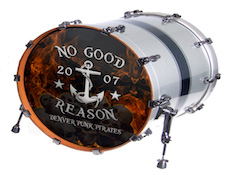 Those possible control enhancements all fell into one or the other of just two categories:  things that were linear in their effect (one unit of positive or negative change would result in one unit of positive or negative difference) and things that were geometric in their effect (one unit of positive or negative change would produce a difference equal to the square of the amount of change made).  The linear examples cited included making the driver's motor bigger or stronger relative to the mass of its moving parts (either by changes to the motor or to the amount of moving mass or both); making changes to the "spring" effects available for diaphragm control; and the use of more than one (smaller) driver for a particular function, instead of just a single larger one. (This last could both increase total available motor power and reduce the amount of mass that any single motor would need to control.) The geometric examples included (once again but for a different reason), the use of more than one driver (including multiple drivers of the same size) for a particular function and the use of panel (planar) or large ribbon drivers instead of the more familiar cones and domes, either of which would result in less diaphragm travel (and thus less diaphragm velocity) at any given volume level (SPL), and a corresponding QUADRUPLING of effective control force for each halving of the diaphragm's travel.

The reason for this is fairly obvious: If, in order to produce a certain level of sound at a certain distance from the driver, I need (just as a graphic example) to move the diaphragm of  Driver "A", which has a total of 100 square inches of moving surface area (about equal to the average 12 inch driver) a total of one-half inch forward and backward in a given time period, I can also get exactly the same total amount of air movement (and thus sound production) from TWO 100 square inch diaphragms or from ONE 200 square inch diaphragm moving just HALF that half-inch distance (a total of one-quarter inch forward and backward) in the same time period. The total sonic output will remain the same, but the total required movement will be halved and, because velocity equals distance per time period, so will the velocity.

Both adding more drivers and the use of large-area drivers like planars and ribbons can, despite their diaphragm-travel and resultant diaphragm velocity benefits, also create problems of their own: More drivers can create "comb filter" effects that will affect a speaker system's frequency response overall or at specific listening positions. And large-area drivers, which, like all other drivers, according to Martin Colloms, will radiate any frequency having a wavelength longer than the diameter of the diaphragm (or the width of a ribbon) across a full 180° of dispersion, get progressively "beamy" (narrower in dispersion) as the frequency being reproduced gets higher and higher and its wavelength gets shorter and shorter, (Wavelength = 13,500 ÷ f  [the speed of sound in inches per second at sea level divided by frequency equals wavelength) relative to the dimension of the driver, until it ultimately becomes almost "laser-like", and you wind up with a speaker like the Acoustat 4+4 which, at a full four feet wide, had a listening "sweet spot" so narrow that just moving your head from side to side would change its apparent frequency response. (sic) Putting it most simply, the bigger the driver is as compared to the frequency it's reproducing, the beamier it will be and (except in special cases) the less useful for listening across a broad range of positions. 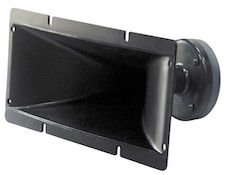 Multiple drivers and large-area drivers aren't the only way, though, to reduce diaphragm travel and velocity: Horn loudspeakers - if only for their appearance, forever the audiophile's darling - will also do the same thing, although not in exactly the same way. Most horn speakers designed for use at anything other than bass frequencies (which I will get to shortly) use "compression" drivers as their sound source. The visible (and often visually impressive or at least aesthetically appealing) "horn" part makes no sound of its own, but provides coupling of the pressure waves (the sound) created by the compression driver to the ambient air with a strong "megaphone-like" amplifying effect for much greater acoustic output at any given level of signal input.

Compression drivers combine a very small, low mass/low inertia diaphragm with an often disproportionately large motor assembly and stiffer-than-usual spring arrangement (usually just a spider or spider-equivalent, with no equivalent to a normal cone driver's surround) to take full advantage of all possible linear control factors. Then, by using an acoustic horn to amplify the sound produced by the compression driver, they typically produce sound levels in the range of 10 decibels LOUDER than would a typical cone or dome driver with the same input. Although this was a great benefit in available SPL in the ancient days of only very limited power amplifier output, its real benefit in the modern world is that, to get the listening levels that audiophiles and music lovers want, far less input power is required. This means less diaphragm movement, which means vastly greater diaphragm control and correspondingly better sound quality. To give you an idea of just exactly how "vastly" that control is increased JUST BY REDUCING THE REQUIRED DIAPHRAGM MOVEMENT, remember that each halving of diaphragm velocity (the effect of each 6dB reduction in powered output level), results in a quadrupling of effective diaphragm control power; that these quadrupling effects multiply, rather than adding (4 x 4, not 4+4); and that a 10 dB difference in output level would therefore allow for most of two full halvings. 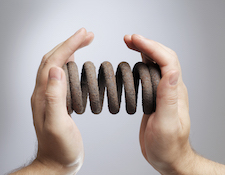 Where a driver - in this application, almost always a conventional cone, rather than a compression driver - is intended to be used in a horn speaker system, the designers will normally take advantage of the amplification effect of horn loading and specify a bass driver with a bigger motor, stiffer springing, and a shorter "throw" (the total amount of available diaphragm travel from maximum forward to maximum back). Even though each drop of one octave in frequency to be reproduced will always require four times more diaphragm travel to maintain the same volume level, they use the amplification effect of the horn to reduce the travel required, and thus maintain better protection against overshoot or undershoot by the woofer's necessarily larger and more massy diaphragm. (Interestingly, even where a true horn isn't used, just placing a subwoofer into the corner of a room, at three room boundaries [two walls and the floor], will theoretically create a "1/8 space" (1/2 π) and provide 18dB of gain relative to that same woofer playing in completely free air, and turning the woofer's volume down to match the level of the rest of the system, playing nearer the center of the room can net similar diaphragm control improvement.

As with everything else, horns have their own particular problems. I'll write about those next time, and also about a kind of non-horn speaker that I think you'll be interested in learning about.