In Part 1 of this new series about binaural sound - a very special recording technique for playback through headphones, only -- I started by giving some facts about the sound we hear and how we hear it.  Here are some of those plus a few more thrown-in for clarity of explanation:

Every sound we hear is made-up of and perceived from pressure waves in the (usually air, but we can hear under water, too, and through other media [a steel rail, for example] if we touch our ear to it). Those pressure waves are constantly moving at "the speed of sound"  and -- if they are consistently repeated to comprise a single tone (a single "frequency") - they are of a length (the "wavelength") always equal to the speed of sound in the medium they're passing through (again, usually air) divided by the frequency - the equivalent rate (not number) of repetitions per second - of that tone. In air, the speed of sound depends on its temperature, pressure and humidity but, as a standard, the speed of sound in dry air at sea-level at 68° Fahrenheit [20° C] is usually said to be 1,125 feet per second [343 m/sec].)

Besides just its amplitude (how loud it is), the sound we hear is very much a matter of timing and of distance: "Timing", in terms of the frequency (the "often-ness" of the repeatable waveform); the  duration (how long one waveform lasts); and the phase (positive or negative, and to what degree [no pun intended, but I'll take it anyway]) of the pressure waves impinging on our ears: and "distance" in terms of the distance traveled by each pressure wave in getting to them.

Although human hearing has a decidedly non-"flat" frequency response, encompassing only (for a young person in good health) about 20 Hz to 20kHz (while dogs hear up to 40kHz and bats up to 80kHz); and a not particularly impressive (by other animal standards) threshold-to- threshold amplitude response, we do have GREAT time and phase differentiation ability, and those are the things most important in locating objects by their sound; auditorily determining the size and shape of a space; and  enjoying the spatial aspects or unraveling the complexities of music  - all things that audiophiles love.

Unfortunately, those things that our ears are good at are not what ordinary stereo recording is good at. They are, though, where binaural recording and headphone playback can really shine!

To explain how that works, instead of starting with stereo microphone and speaker placement, as I did last time, let me turn it around and talk, now, about how our ears work and how different that is from the recording and playback technologies we're used to. 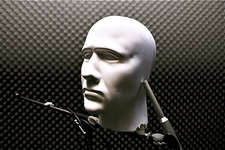 First, though, let's talk about one very important similarity: When a sound - whether a pulse, a single tone, or the most complex music signal - falls on either an eardrum or a microphone diaphragm (to make it easy, I'm going to call them both "diaphragms") -- it causes (because there is only one diaphragm per ear or microphone) one single movement, which will be either forward or backward depending on the polarity (positive or negative) of the total aggregate pressure (the sum of all of the positive and negative pressures affecting the diaphragm) at that instant.  How far the diaphragm will move will depend only on the total net amount of pressure (the net amplitude of all of the pressures comprising the total), and what we hear or what will be recorded in any medium is nothing other than the position of the diaphragm at any given instant - with the number of instants possible to perceive or record being infinite for our ears or an analogue medium and limited by the scan rate in a digital medium.

Now, consider that, in either our own hearing or the simplest stereo recording (two microphones usually spaced something like eight feet apart), when a sound happens, (just for fun, let's call it a marching band) both of our ears or both of our microphones will hear all of it, but unless it's a "one-man band" (one guy playing a bunch of different instruments all by himself at the same time) and unless he's standing-still, directly in front of us or directly between the two microphones, neither we nor the microphones are going to hear it all at the same time.