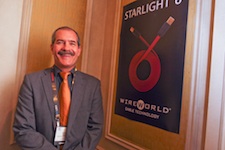 This is the first of a series of interviews Audiophile Review will be doing with who we consider to be the important designers and trend-setters in audio. During this interview David Salz of Wireworld answers some of the "hard questions" about wire, cable, and why he does things the way he does.

AR: When and why did you start Wireworld?

DS: I started Wireworld in January of 1992, just a month after selling my previous company, Straightwire. The ten years I spent developing that company and my cable designs were very rewarding, so I naturally wanted to continue my career in cable design. By that time, I had over a decade of experience with the objective testing methodology that has proven to be my most valuable tool for creating higher fidelity cables.

AR: What would you say is your "core philosophy" or primary mission statement?

DS: My core philosophy was born back in 1980, on the day that I became so frustrated with the artificial sound effects that I heard from all of the interconnects I owned, that I moved my preamp and amp back-to-back and connected them together directly with very short homemade male to male jumpers. The sonic result of that change was a revelation, as I heard much more music through that 'cable bypass' than I had ever heard through a cable. When I compared any of the cables to the bypass, their losses and colorations stood out more clearly than ever before.

That comparison convinced me that none of the cables I had tried were thoroughly engineered and I also realized that I had discovered the tool that would help me learn how to create cables that preserve more of the natural acoustic qualities of live music. Upon the day of that singular discovery, I decided that designing cables would be my career, and that my mission would be to produce cables which perform as close as possible to a direct connection.

Even though nearly all audio cable manufacturers agree that neutrality is their goal, I believe that Wireworld is the only company that actually tests cables for neutrality. The common method of evaluating cables by simply swapping them is clearly inadequate as a development tool, because it can only reveal sonic differences among cables, not the actual sonic effects of a cable. Scientific testing requires the use of a test control/reference and the only true reference standard for cable performance is a direct connection between components. Consequently, our reference systems are custom designed to function with direct connections between components, so that cables can be inserted individually, allowing cable losses to be analyzed and effectively minimized.

AR: How did you come up with your Cable Comparator box?

DS: In 1995, after about fifteen years of manually switching between cables and bypass jumpers, I designed a device that made it possible to switch between interconnect cables and a bypass with or without knowing which was which. That device, The Interconnect Comparator™, received the 1996 CES Innovations award and a U.S. patent. Since the Interconnect Comparator introduces some audible loss of its own, it didn't improve the quality of my bypass testing, but it did provide convenience and the first conclusive proof that cable effects were audible under double-blind test conditions. A few years later I produced more advanced versions of that device with remote control and speaker cable testing capabilities.

AR: Do you still use it and how many are there in the field?

DS: I occasionally use the Cable Comparators to convince non-believers, but not for developmental testing, because they reduce resolution compared to manual bypass testing. I don't really know how many are still in circulation, since we've been loaning them to reviewers around the world for many years.

AR: You just received a patent for USB cables. What is the patent for exactly?

DS: It's actually still pending and it covers all of our DNA Helix™ cable designs, including USB Audio cables, interconnects, speaker cables, digital audio and HDMI cables. The patent revolves around the basic principle that most of the signal energy in cables is actually carried in the form of an electromagnetic field, rather than as electron flow, as is commonly assumed.  The electromagnetic field effects present in most cables are substantially under-controlled and non-linear, which creates most of the tonal, spatial, textural and masking effects that we hear from cables.

Upgrading materials alone does not reduce these effects. In fact, the inherently superior resolution of silver conductors often accentuates them. The various electromagnetic effects, including skin effect, inductance, proximity effect, eddy current resistance, and strand interaction, are often mentioned in cable literature, but very few cable designs actually reduce them in any meaningful way and none have minimized them to the point of inaudibility.

The DNA Helix designs covered by my new patent effectively minimize all of the electromagnetic field effects, thereby preserving more electromagnetic field energy than other designs. The benefits of this technology are so substantial that our new USB and HDMI cables have about 20% faster transmission speed than other cables made with the same materials. The DNA Helix design also improves the waveform fidelity and therefore the sonic transparency of interconnects and speaker cables to a similar degree, approaching the pure and effortless sound of a direct connection more closely than ever before.

AR: Which is more important, cable geometry, construction, or materials?

DS: There's an old saying among engineers that says 'better engineering doesn't cost more'. While every aspect of the design and construction of a cable can be audible, the most obvious colorations and losses caused by cables are the result of the electromagnetic effects that can only be minimized through superior cable geometry. Upgrading the materials and manufacturing tolerances of standard or creative cable designs can be helpful, but high value at any price level can only be achieved by minimizing the electromagnetic losses, so that the benefits of better materials can be fully realized.

AR: It is possible to make a low-priced cable that offers most of the performance of a cost-no-object cable?

DS: That's a loaded question, because from my perspective, most cost-no-object cables don't provide the unadulterated sound quality that I've grown to expect. So for me, cables made with standard oxygen-free copper conductors that are engineered for neutrality, would be preferable to most solid silver cables. The same holds for true for digital audio cables, where the DNA Helix design gives our $80 Starlight 6 coaxial digital cable the superior speed to provide much lower jitter than a famous European solid silver digital cable that sells for many times its cost.

AR: Where do you see the cable business changing as a result of more wireless connection systems.

DS: Wireless connection systems are certainly a convenience, but they never provide the best connections, which are clearly the priority in our end of the home entertainment market. Based on that priority, I don't expect that wireless connections will become common in high fidelity systems for years to come.

AR: Do you think that there's more room for innovation in cabling?

DS: I firmly believe that the process of innovation will continue to improve all types of audio components, including cables. I also feel that the great improvements in speakers and electronics that I've witnessed over the last few years have made more consumers aware of the fact that their cables aren't letting them hear as much music as their system is ultimately capable of revealing. With that in mind, I'm always looking for new ways to improve my products.

AR: What's next for you and Wireworld?

DS: I'm working on some new power line accessories and improved connector designs that could appear within the next year. I'm also developing a new way of demonstrating the differences in sound between cables and the reference standard for cable fidelity, a direct connection between components.
comments powered by Disqus
Top of Page