In the late 1990s, a peak time for CDs, I made one of a series of golden blunders when it came down to my new music purchases.  One of my favorite bands, England's XTC, was releasing a wave of new releases with lovely variations across a potpourri of formats and I couldn't afford to buy all of them at the time. There were the two basic albums from the same sessions which (as I remember) came out more or less back to back in 1999 and 2000 (Apple Venus and Wasp Star (Apple Venus Vol.2), each available on vinyl and CD. But then there were two packages of demo versions of the albums (also on LP and compact disc)! And then.... there was a matching pair of instrumental-only CDs in deluxe packages. And then... there was a special super deluxe CD boxed set version which you could buy directly from them (via the Internet which included a 64-page booklet, both albums and the demos and a beautiful real Peacock feather!!)  And then there were some CD singles, 45s and other promotional joys. 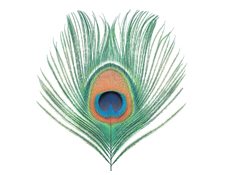 So, please forgive me for not buying everything! In the end I went for the deluxe boxed set with the Peacock feather, the Apple Venus instrumentals album (called Instruvenus) and I of course picked up the regular CDs (different cover art, don'cha know....) and the CDs of the demos for both albums (titled Homespun and Homegrown).

However, when it came down to the vinyl, I opted to get one of the demo albums and not the basic albums. My heart later sank and I realized my big mistake when I heard from a music producer friend (then working with my band on our third album) that the vinyl version of Apple Venus was a wonder. He played me some of it and I was bummed.  This bummer increased when went looking for a copy in the stores and found that it was pretty much non-existent. These albums went on to become elusive collectors items (original pressings are still commanding a lot of coin!).

So for all these years I've only been able to hear these albums on CD and that is a shame as Apple Venus especially is a quite dynamic, HiFi-demo-worthy listening experience, especially the symphonic oriented songs, orchestral parts recorded at Abbey Road Studios. That the album had a somewhat difficult birth and challenges is almost irrelevant at this point in time as ultimately its about the music -- these albums have stood the test of time right up there with XTC's major label releases.

So it was exciting news to learn that the two albums have finally been reissued on vinyl so we can hear this music in a higher resolution form than on CD. And I am not disappointed. 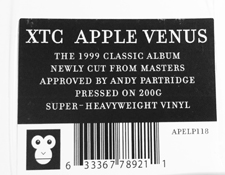 Not surprisingly, of the two, Apple Venus delivers the bigger sonic punch from a basic audiophile perspective.  Its the one you Dear Readers out there in audiophile land might be most interested in as it is an often quite widescreen-like listen with wonderful separation and instrumental clarity blending orchestral sounds with judicious rock and rich acoustic instrumentation. This album contains some of my favorite XTC songs, works that stand tall next to other perhaps better known big production XTC albums like Skylarking, English Settlement and Nonsuch (all of which, by the way, have been reissued in high resolution surround sound mixes which I have reviewed here on Audiophile Review.  Click on these links here to read about Skylarking on vinyl and in surround sound, here for English Settlement on vinyl and here for the deluxe edition of Nonsuch).

Songs like the album opener "River of Orchids" -- with its orchestral plucks and water drips (yes! dripping water sounds contribute to the flow of the music) and the majestic "Easter Theater" sound magnificent on the new 200-gram LP.  "Harvest Festival" and "The Last Balloon" are even more haunting and mesmerizing, if that is possible, compared to the CD original. The scathing "Your Dictionary" holds its own in the universe as one of the most brilliantly bitter relationship kiss-off songs ever.

How does this reissue of Apple Venus on vinyl compare to the originals?  Well as I stated at the beginning I never had the original on the Cooking Vinyl label but compared to the original CDs there is no contest. The new vinyl is warmer and more natural sounding. I was able to turn this up very loudly and not endure any harshness or collapse of the music. In fact, the album seems to blossom like a flower when you turn it up loud!

When I tried to do pump up the volume with the original CD (on the now defunct TVT Records label), things got pretty harsh pretty quickly and thus it was not an especially enjoyable experience. I even noticed this in the car when I was playing this version recently. Perhaps I'm overly sensitive to this kind of thing, I don't know.  Your experience may vary! 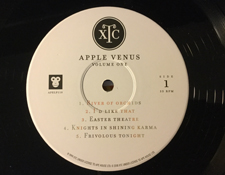 Curiously, this harshness seemed to actually be less of an issue when playing the CD of Apple Venus from the Apple Box set (made in England).  I had a similar experience with the Wasp Star CDs as well! So... perhaps the old vinyl record collector's rule of thumb -- that UK pressings are better for UK based artists --- extends to the CD realm as well?  Or at least these discs are being decoded more sympathetically with my trusty old Oppo universal player that I have here in my office.  Interesting... I don't know for sure. There are so many potential food-chain variables that can get in the way of the music when it comes to sound reproduction!

Anyhow, I do look forward to the hopeful (eventual?) deluxe edition CD/Blu-ray reissue of Apple Venus with a surround sound mix on the latter. That will be a joy to hear!

Detailing is really nice on the LP and little sounds I kind of missed on the CD really shine here (such as the sort of flanged-nylon string guitar scale run-in intro to "Knights In Shining Karma"). The vocals sound much warmer and natural on the new LP than on the old CD, the latter displaying an annoying crispiness this side of an overdone order of fast food french fries. There is also a nicer sense of studio air around the vocals, not feeling quite as compressed and congested. I really love playing "Easter Theater" with my amp turned up to 11 on this new vinyl version! 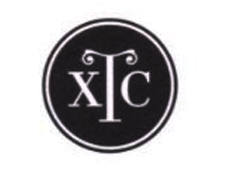 And so it goes on these fine new reissues. This will give me something to hold onto until we get the 5.1 surround sound versions, perhaps in 2019. The LPs come with a lovely plastic lined full color sleeve promoting the entire XTC catalog with indicators about "further releases planned for 2019/2020."

In Part Two of this review series we'll look at the sister release to Apple Venus called Wasp Star (Apple Venus Vol. 2).  In the interim, if you want to explore XTC's other albums most (except for Apple Venus and Wasp Star!) are streaming via Tidal in CD quality if you have access to that subscription service (click here to jump there).