This year, in 2016, we have now been twice-entertained by fabulous reissues from Swindon, England's finest popular musical group, XTC. 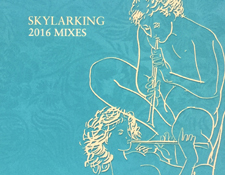 Today, we will explore the second of these fine, fine restorations of one of the finest pop music recordings of the 1980s, a smash hit musical work that stands proudly even next to the finest of England's other big name beat group (alternately known as The Fab Four): Skylarking.

We have previously discussed in these pages at Audiophilereview dot com the fabulous, polarity-corrected version of XTC's Skylarking on 200-gram vinyl. In case you missed that review, you can click through to read about it here.

Right now, however, we have in our hands the spectacular two-disc, CD-plus-Blu-ray super deluxe edition. It not only presents a stunning aural history of the recording, but also offers the music re-envisioned into glistening 5.1 surround sound by the great audio engineer and producer, Steven Wilson.

This version sounds quite fabulous overall, so for those of you who don't have a turntable or simply don't want to spring for the vinyl edition, this Blu-ray package should be a good alternative for you.  It doesn't disappoint.

Between the vinyl restoration and this new Blu-ray, we -- the loyal fans of XTC -- now arguably have access what must be the definitive views into XTC's legendary breakthrough. The only thing that might be better would be hearing Skylarking played directly off the master tape in a studio.

"You tell me that you've heard every sound there is... "

Beginning with the 5.1 surround sound mix, engineer-producer Steven Wilson has once again created a compelling and tasteful reinvention of a rock classic without losing its essence. Lush yet non-gimmicky, Wilson leverages the rear channels and overall surround sound fields (if you will) cautiously without sacrificing a cheerful sense of adventure. 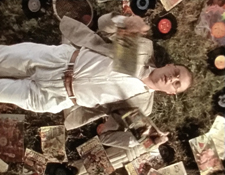 For example, on "1000 Umbrellas," big drum hits resonate while swirling strings get extra trippy-psychedelic around the listener.  On "Season Cycle," rich backup harmony vocals emerge comfortably from the rear amidst a nice bed of reverb and room ambiance.

An organ pops from the right...

"Earn Enough For Us" features groovy tambourines, harmonies and handclaps in the surrounds. Gongs in "Big Day"percolate from behind.

"You tell me that you've got everything you want..."

Four nifty bonus tracks have been mixed into surround sound for this release into a sort of supplemental EP of sorts.

The period B-side "Extrovert" swings much more than the original stereo mix, with its jazzy funky horns jumping joyously from the surrounds.  "Let's Make a Den" is a super fun neo Bubblegum pop tune which was previously only available in early demo form. While I can hear why it was left off the final track listing for Skylarking, along with these other tracks -- "The Troubles" and "Little Lighthouse" -- the band could have issued a terrific EP featuring these four songs. It would have been a fun complement to the album back in the day.

The deluxe edition Blu-ray of Skylarking also includes a huge number of original demos created by both Andy Partridge and Colin Moulding (note: some of these have probably appeared on Andy's Fuzzy Warbles archive series, but I have not had time to compare/contrast those.... even if they are duplicated, it is super handy to have these tracks contextually collected in one place). 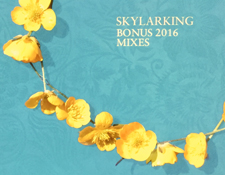 "Shaking Skin House" is a Stones-y rocker that includes an early peek at music which developed into the chorus to "Merely A Man" (a song that ended up on Oranges & Lemons a couple of years after Skylarking).  It is fun to hear the rehearsals for a song that only really got as far as a demo: "Ra Ra For Red Rocking Horse" (which hardcore XTC fans will no doubt be familiar with from its appearance on fan club releases and also Andy Partridge's aforementioned exhaustive collection of home demos, the nine CD Fuzzy Warbles boxed set).

One of my favorites from this batch is a quite stunning early "skiffle" version of "Dear God," a track which almost accidentally became a surprise hit after it had been taken out of the album running order.

Speaking of "Dear God," the Blu-ray Disc of Skylarking includes original music videos for that hit as well as "Grass," both produced by photographer / film maker Nick Brandt (who made promotional films for the likes of Michael Jackson, Moby, Badly Drawn Boy and others in addition to XTC).  Watching "Dear God" for the first time on a big screen in a fairly high resolution form -- and I say "fairly" as the film elements have not been "restored" so there are some cinematic artifacts apparent, but nothing terrible -- I was taken by just how powerful this short form film remains to this day.  A powerful statement back in the day, the video has aged well and Andy Partridge's acting in it is to be commended, delivering a controversial but resonant warning message for the ages, one which can still elicit a strong emotional response.

When your prized possessions start to weigh you down...