The new John Lennon super deluxe boxed set -- called Imagine - The Ultimate Collection -- takes listeners on a rich magical mystery tour through the creation of one of the most beloved and influential pop records of the early 1970s spread across four CDs and two Blu-ray Discs. For the mass market, Imagine was arguably the first album by ex-Beatle John Lennon to be considered (if you will) "Beatle-worthy."  That is, while his first solo album (Plastic Ono Band) was a landmark of raw nerves confronting demons, Imagine was a considerably more polished recording of universal appeal, bearing the production aesthetic one might expect from an ex-Beatle. 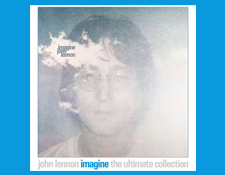 In this third portion we explore the outtakes, B-sides, alternate mixes and other elements that went into the making of this incredible recording, all of which are presented in both high resolution 24-bit, 96 kHz resolution on Blu-ray Disc as well as on standard 44.1 kHz, 16-bit CDs. In general everything in the set sounds first generation crisp and clear, even the monaural field type recordings documenting the early genesis of some of the songs. And in general, everything sounds like the Imagine album sounds, with some unique exceptions we'll discuss ahead... 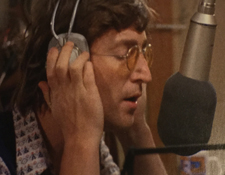 When initial news of Imagine - The Ultimate Collection first emerged on the Internet, some of my Beatle-oriented friends made an unprompted comment when discussing the set's potential, saying they would have preferred Imagine if it had been produced in the more stark manner like its predecessor, the groundbreaking, heartbreaking Plastic Ono Band album. Well, those dreams more or less come true with Imagine - The Ultimate Collection as you can now hear the whole album in a stripped back form similar to the sound of Plastic Ono Band. These basic core band performances are fully formed and stand rather righteously on their own without the support of overdubbed strings and such, often times in a quite striking manner.  Many times the takes presented are extended versions which had been edited for the final release.

The versions of songs like "Give Me Some Truth" rock mad hard while "How Do You Sleep?" pierces to the heart perhaps even more fiercely than the original given that Lennon's lead vocals are unadorned by reverb and other production effects. That is saying something given that the original versions pretty hard!  On "Oh Yoko!" the version ends differently than the final finished fade-out version and you will understand why they may have decided to end  the song out the way they did with the solo harmonica (but I won't spoil the ah-ha moment for you -- you'll have to listen for yourself, Dear Readers!). 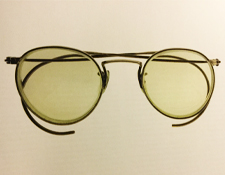 For a deeper dive into the making of the Imagine album the Imagine - The Ultimate Collection offers a whole CD (and its own section on one of the Blu-ray Discs) dedicated to "the elements" which add to the distinctive sound of the recording.  So you'll hear the gorgeous isolated string sections for "Imagine," "How Do You Sleep?," "Its So Hard," and "How?"  There is a wonderful stripped down Piano-Drums-Bass version of "Jealous Guy" and John's vocals only-mix of "Oh My Love" is heartwarming  You also get a wealth of outtakes such as John's original demo and first take of the title track and a charming early version of "Oh Yoko!" recorded in the Bahamas in 1969! I could go on but you get the idea I think that there are some wondrous things here, presented from the best available sources in up to 96 kHz, 24-bit resolution on the Blu-ray Discs. 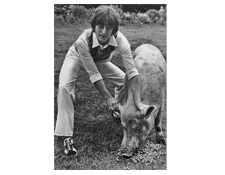 Imagine - The Ultimate Collection contains a fascinating series of track-by-track mini-audio documentaries (monaural) tracing the development of each song on the original Imagine album (found on CD #4 and Blu-ray #2). Each clip averages about six to seven minutes and the series is presented in the same running order as the original album which is great for continuity and context. The producers cleverly use snippets of studio banter, excerpts from taped interviews with Lennon and audio snapshots of the progress made on the song along the way to illustrate the thinking, challenges and technical process that went into its creation. You'll hear early demos, run-throughs, experiments and rehearsals as the producers achieve the balance they were seeking leading up to the final winning performances.

Perhaps the most stunning moment in this sequence (at least for this reviewer) is the audio documentary revolving around the song "How Do You Sleep?" In this segment we hear Lennon address the controversy underlying this song while also dismissing it in a fascinating manner. Paraphrasing, he basically says the song was about him, not explicitly directed at his former band mate Paul McCartney (as most of us thought back in the day)! And it is heartwarming to hear that he didn't hold a long term grudge.

For those not in the know, in the early 1970s after The Beatles split up, there was much acrimony between the individual Beatles. McCartney's RAM album (released in May 1971) took some not so veiled pot shots at Lennon ("you took your lucky break and broke it in two...." ), the back cover even showed two actual beetle type bugs humping, effectively "screwing" one another (if you will).  Lennon replied to this in kind on the Imagine album (released in September that same year) with the seemingly scathing "How Do You Sleep?"  To make sure he was clear in his intention, he included a bonus postcard in the initial pressings of the album showing Lennon holding a pig in the manner of McCartney's RAM cover.  Images of the pig postcard are included in the book with the set.

But still ... for all this embittered folly, some of the lyrics on "How Do You Sleep?" didn't make complete sense  if one considered them directed solely at McCartney... Particularly, the opening line of the song "So Sergeant Pepper took you by surprise..." never made sense to me as an attack given that Pepper was McCartney's idea in the first place!  However it does makes good sense that Pepper might've taken Lennon by surprise. So that's just one  of the many revelations that you may glean from a set like this ( there are more details in the accompanying book).

I found it quite fascinating to hear the evolution of the song "I Don't Want To Be A Soldier Mama..." because you hear Lennon conveying his loose ideas which resulted in the sort of twisted Reggae vibe that they worked up there. It's also quite fascinating hearing how the hoedown flavor of "Crippled Inside" comes together. 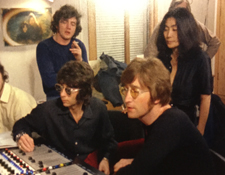 There were a handful of non-LP, 45 RPM "single" records originally issued around the time of the Imagine album. And some of them rock harder than ever on these new remixes, especially on the Blu-ray version. "Power To The People" was always a great anthem but to my ear it always sounded a bit .... um... lets call it congested on the original single.  Here on Imagine - The Ultimate Collection it opens up in full flower fidelity!

The semi obscure single "God Save Us" -- written and released to benefit the Oz Magazine editors who had been jailed for obscenities related to their underground 'zine -- is fascinating because the original single featured Lennon's band fronted by a fellow named Bill Elliott on lead vocals (later of the Dark Horse Records band Splinter). Here on Imagine - The Ultimate Collection we finally get to hear Lennon's own raw demo version! The B-side to that single, "Do The Oz," is a groovy freakout studio jam session and it still sounds as wild and woolly as it did when I first got that single in the mid-70s. It sounds especially wonderful 'n weird in 5.1 Surround Sound with Lennon and Yoko's mad vocals, shrieks and yelps coming at you from all over the room in genuinely trippy psychedelic fashion.  Fun! 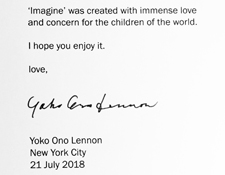 The lovely hardcover book that accompanies Imagine - The Ultimate Collection is a first class production in its own right and worth discussing. The book is chock-full of informative details as well as compelling photos from a variety of period photo shoots, recording sessions, etc. As I mentioned in Part Two of this review, I was especially taken with the fact that they took the time to give us wonderful detail on all the different Surround Sound mix mixes. This definitely raises the bar for how surround sound releases should be handled and explained. I am really very happy with this set.

As if all this Lennon wonderment isn't enough, there are special edition Blu-ray Discs coming out of two Imagine-related video features and a vinyl reissue! As soon as I get my hands on those editions we'll be sure to review them for you. But for now, we're still reveling in the joys within Imagine - The Ultimate Collection and suspect you'll do the same.

I'll close with some much deserved kudos for Yoko Ono who made sure that this set was made with the same love that went into it the original recording's creation. She put a beautiful welcome statement at the start of the book here which is a nice way to end this review series:

"Imagine was made with immense love and concern for the children of the world.  I hope you enjoy it."