There is an infamous line Bruce Springsteen used on at least one (but I think several) radio broadcasts talking to his unseeable audience -- "All you bootleggers out there in radio land, roll your tapes!" -- just before the band launches into a killer tune, such as the then-unreleased "Paradise by the C." 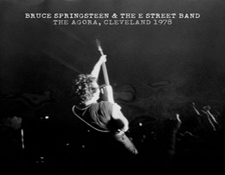 Perhaps he didn't fully realize that those radio broadcasts -- and perhaps those home recording-endorsing statements -- would be launching a collectors buzz rivaled only by the Grateful Dead and Bob Dylan. Today, Bruce Springsteen is arguably one of the most documented of artists, with fans faithfully documenting every different version, unique set list, guest spots and any other unofficially released rarity that makes the recording worth owning.

In these days where there are no "tape" recorders per se -- people document memories of their concert experiences digitally to hard drives on iPhone, iPads and little portable high-resolution digital recorders -- all this talk may seem sort of curious and strange for those of a certain age. I mean, everyone and everything gets documented nowadays. But back then, it was an enthusiastic underground of super-hardcore fans who diligently snuck in their recorders to document the shows and taped things off of TV and radio.

This was not a new thing, mind you. It is a byproduct phenomenon of portable recording technology that can be traced back at least as far -- maybe earlier, I don't know for sure -- back to the 1940s to the likes of Duke Ellington and Charlie Parker.

Those of us without the fancy portable recording gear relied on blessed radio broadcasts to capture some alternate view of our beloved heroes in concert at a time when no live recordings existed. I remember tuning in diligently to Sunday night syndicated shows like the King Biscuit Flower Hour to hear live performances by everyone from Frank Zappa to Warren Zevon.

And of course, Bruce Springsteen.

Copies of tapes got traded by friends across the country as these humbly made home hi-fi recordings made by kids in high school journeyed with their fanatical owners on to college. And before you knew it, one original tape made off-the-air of Bruce at the Capitol Theater in New Jersey garnered you dubs of shows other fans had made in their hometown cities including Philadelphia, Los Angeles and Cleveland. 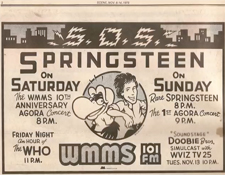 Many Bruce fans will argue that one show is better than the other. I will go on record and say that all the shows are great. I do think one's view of the concert depends on your personal experience,when you heard that show and how it connected with your DNA. To that, Bruce at the Agora on August 9, 1978 is one of those early peak shows that most fans agree is among his best.

And now you can buy and download that show in superb 192 kHz / 24-bit high definition fidelity right off of an official master tape made at the time of the broadcast and kept in the Springsteen archives all these years.

It's hard to explain how significant this is for the audiophile-inclined Bruce fan. Most of us heard these radio shows over the air, which is a compressed "format" -- if you will -- to begin with (to adhere to the constraints of FM bandwidth, a certain amount of compression is applied to the signal emanating from the radio station, this in addition to any compression that was employed in making a particular record). Inevitably the broadcast had glitches in the signal path, and often there were tuning issues at times. Still, it all sounded pretty great and those tapes people made at home got played over and over and over, alongside the regular albums.

And in the case of Bruce Springsteen, there wasn't an official live album until around 1985, so good-quality concert tapes made off the radio were key for the fanatical fan.

Anyhow, I contacted the good folks at Livedownloads.com (who are hosting a lot of the official Bruce downloads) and they kindly sent me a copy of the Agora show to review (full disclosure). After hearing this, I have no hesitation recommending these downloads as they are doing them up right, in high resolution and with actual mixing from multi-tracks or master stereo mixes where available and serious mastering (by Gateway Mastering). 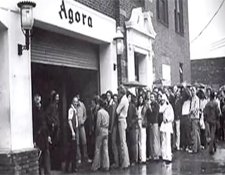 The other reason I specifically wanted to hear the Agora show was that it was put through the Plangent Processes treatment (which we have written about before here at Audiophile Review). I really wanted to hear how it might help these tapes.

As I seem to have lost my old cassette of this show, I had to rely on listening to some fan's earlier posting of it on YouTube for comparison. This new source is likely going to sound a whole lot better as I'd be willing to bet it was made before the signal went out over the air (and thus sans the additional compression). I will frankly admit that any recording of this show would probably sound better than what I have in my memories as the copy I had was probably a fourth-generation dub from a friend of a friend of a friend who knew someone in Cleveland who had taped the show.

Hearing a clear first generation tape of ANY kind would be a revelation. However, this one sounds so good and so consistent and rocking, I have to attribute some of that natural as-it-was-broadcast kind of feel to the wow and flutter canceling wonderment that is Plangent Processes. This is as close to a time machine as we are bound to get, enabling Bruce fans old and new to enjoy the shows that cemented a place in their hearts for Bruce as hero for the decades to come.

Cleveland DJ Kid Leo opens the show with a rousing: "Round for round, pound for pound, there ain't no finer band around."

And the band kicks into a version of Eddie Cochran's "Summertime Blues" that rocks like no other version I've heard to date by Springsteen. The band is rocking hard from the get-go and the performance plows through with a steadiness I'd never experienced on any of the cassette tapes of the radio broadcast.

There are stereo drums on this recording! Bruce's guitar in the one channel, Miami Steve in the other. Garry Tallent's pulsing bass locked in dead center with Max Weinberg's kick drum.

Clarence's sax solo on "Prove it All Night" is clear and punchy. Max's drums are beautifully panned -- you really get a sense of the club ambiance when he hits the center of his ride cymbal, which cuts through like, well, a glorious bell. 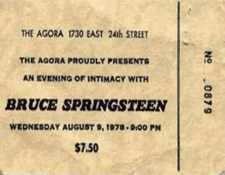 I have to add a little bit of perspective here for those who don't fully get "the Bruce thing" (as I have heard some refer to it). Consider the timing of the mid-'70s ... the Beatles were gone and delivering diminishing returns as solo artists (yes, including McCartney's Wings). The hippie dream had died an ugly death which gave way to (what some regarded as) the excesses of prog rock and the numbing down of danceable entertainment to a cocaine-fueled disco beat. Nixon had burned out most people's political belief in the country (as did the assassinations of the President Kennedy his brother Senator Robert Kennedy and Martin Luther King). So many of the early rock heroes had died awful and discouraging early deaths: Buddy Holly, Eddie Cochran ... then Jimi Hendrix, Jim Morrison, Janis Joplin, Phil Ochs, etc. The Who's Keith Moon died less than a month after this Springsteen radio broadcast.

So when Bruce came along with Born to Run and Darkness on the Edge of Town, he represented a bright light of hope for fans of rock and roll. Coupled with the onset of punk and New Wave music movements, and you can see that there was a lot of excitement and hope for all sounds rock and pop. Jon Landau's proclamation that he'd seen the rock and roll future in Bruce was wise and spot on even if it was a big of cleverly timed marketing. Bruce transcended all the hype.

And that, Dear Readers, is one things that is so refreshing listening to this concert recording 35 years on -- it holds up! This is timeless stuff, and it still resonates as valid today just as it did back in the day. The messages are strong and salient. The performances are for the ages.

And now it's yours to relive in high resolution audio over and over, until death do us part.

Rock on Bruce. Thank you for opening up the archives and giving us fans another reason to keep on believing in the power of great rock'n'roll.