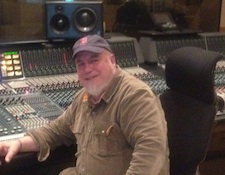 Jamie Howarth is the president and chief cook and bottle-washer at Plangent Processes. According to Plangent's Website, it "is a software/hardware package combining state-of-the-art contemporary analog electronics coupled with unique digital signal processing. Unlike other familiar restoration tools which are additive (such as equalization or companding), or which attempt to subtract noise (but also inevitably subtract ambience and potentially add other artifacts), Plangent Processes does nothing but re-conform the existing waveform to a much more highly accurate timebase, shifting it back to the shape it took on before the tape mechanism distorted its timing." One of Plangent's recent projects was transferring and repairing all the orignal tapes for the Grateful Dead's Europe 72 box set.

Analog enthusiasts will be surprised to learn that merely copying a tape to digital (as happens with many newly-reissued commercial releases) even with the "right" machine and tape heads, is not the best way to do it. Audiophile Review talked with Jamie Howarth about his unique methods.

AP: What is involved in the Plangent process?

JH: Very wideband playback, with specialized heads and state of the art electronics - capturing the original  VHF record bias of the recorder as well as the audio, then using the wow and flutter 'imprint' within the bias as a time base - negating that wow and flutter by reverse-pitch-shifting the recording.

AP: How long did it take you to develop Plangent? What led you to this technology solution?

JH: The germ of the idea arrived in 1980 when I was analyzing tape stocks for a big NYC jingle studio, Howie Schwartz's place. I noticed on the brand new FFT analyzer that the 10kHz tone off tape looked like a spike from the HP digital frequency synthesizer - and looked like a wavering pine tree-off tape... wow and flutter - and at 30IPS when I scrubbed the tape I heard a whistle at a fixed pitch - Tom Cahill from Atlantic Records was my boss- he said "That's the bias" and I was all over it. "Why isn't that the servo?"

It took another 20 years to figure out how to get the right tech and DSP together to do it. Those two pieces of hardware cost 90 grand. Today they're shareware on a Mac... Along the way I heard of a few other folks express the same idea... Michael Gerzon gave a famous paper in the mid 90s calling for wideband capture during archiving. But the original idea for me anyway was back when.. .

The late Dave Smith and I talked about this when I worked with him at Hit Factory in 1982. He built the original circuit block for the preamp, later redone to current SOA by John Chester, and the DSP was done by Patrick Wolfe, a grad student of Simon Godsill's  (CEDAR) ... Mike Spitz, John French and Greg Orton helped with the ATR and heads - Dale Manquen - designer of the original 3M tape machines - taught me a lot about magnetic recording and tape FM... George Massenburg cheered...

A couple great guys in Canada did the prototyping. It worked on the first shot. I stuck pencil in the tape path of the ATR, we fed the audio and the signals to Pat's laptop and 30 minutes later it spat out the file and this horribly distorted recording of the NBC Symphony donated by Art Shifrin was perfectly restored. A lot of good folks helped along the way.

AP: You mention on your web page that flutter can introduce beat frequencies into the music that creates intermodulation distortion, and that "scrape flutter" is particularly a problem in this regard. Could you explain that for readers who aren't familiar with tape technology?

JH: ALL flutter creates beat frequencies - sum and difference products appear on all the legitimate audio intended to have been recorded or played back. For example a 60 Hz flutter on a 440Hz flute fundamental will appear as 500 Hz and 380Hz sidebands. Effectively this is a form of intermodulation distortion. Since it has no harmonic relationship to the program it is quite distinct and clouds the original signal, and depending on the harmonic structure of the original signal these "beats" can harden the sound, or blur the lower midrange, and a myriad of other effects. Typically IM has been encountered in audio as a function of the amplitude modulation (AM) of the audio caused by power supply sloppiness, or other non-linear causes --- this is really the first time that FM has been shown to be equally audible.

Back in the day it was very difficult to measure this type of thing - ironically the same expensive digital processing that made it possible to measure is the same technology that makes it possible to record digitally, so this was kinda skipped over back in the late days of tape recorder design. It was known to the top guys as a problem, and the ATR and the 3M designers were well aware of it. Scrape flutter is a peak of noisy activity in the 2kHz to 5kHz region caused by the scrape of the oxide against the head causing the unsupported spans of tape between guides to "sing" just as a rosined bow excites a violin string. This was thought to be mythical by some of the grey-beards that established the early standards, though a few argued otherwise. It is indeed a source of a lot of the cloudiness and darkness in tape playback, where the tones measure flat and the program sounds dull. And it wreaks havoc with the imaging.

In fact any higher frequency flutter screws up the imaging and affects the listener's ability to chase reverb tails to black, and to comprehend inner voicings in the music. Linn used to market the "tunefulness " of their heavy viscous bearing-damped turntables - which compared to a Technics SL direct drive sounded warmer, and more detailed... this was a paradox during the time that everybody was pushing more 15kHz to get brighter more detailed recordings. But the Technics sounded harsh and weird and the imaging was flat. That's because the high frequency flutter caused by the Technics' noisy servo jittering was massively higher in level than the heavily damped Linn, complicated by the weighting curve that made the percentage numbers look abnormally small as the frequency rate of the flutter increased.

The psychoacoustic results are identical when the Plangent processing is applied to tape containing high frequency flutter and scrape flutter. It's likely that early digital had the same problem. David and I amplified a PCMF1 early 16-bit recording with nasty converters to hear the quantizing cutoff. The air conditioner rumble and the end of the hall reverb cut faded to black long before the digital floor - so obviously something else was causing the well-known effect where the ambience felt truncated... it was there but something was causing our ears to lose track of it. That turned out to be jitter. Once the clocking is fixed, even a 1610 recording from that era in 16 bit sounds good. I played Bryan Adam's Reckless, a fabulous Bob Clearmountain mix cut to CD very early on - and it sounded really nasty back then - the LP just ruled, the tape was fantastic, the CD sucked... Just for fun I pulled it out the other day and played it back on a jitter-free oversampling "today" player; it sounds fabulous, and the quantizing error is the same as it was in 1984.

Some of the early knocks on digital are now coming to be confirmed as folk-art as a result of some of the work we've been doing on time-base errors. I also think there's something about slew rate and resonance -reduction in consumer gear including and especially the demise of cloth - dome tweeters that makes the sharp transient speed of digital easier for the average consumer hardware to reproduce. But that's a whole other matter. 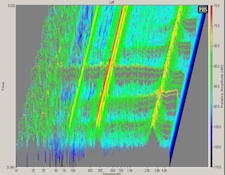 AP: Is Judder the same as jitter?

JH: Judder is a cute term probably somewhat misappropriated to describe the slower high frequency jitter of tape, as contrasted to clock jitter in digital, which has a different spectrum.

AP: You mention FM-Based intermodulation distortion; How does that happen to tape?

JH: See the above, and to recap - the mechanical parts of the transport actually contributed a lot of really fast cyclical pitch jitters that cross-modulate with the audio creating sum and difference products that aren't present in the original material. Sum and difference distortion IS Intermodulation Distortion whether caused by AM intermodulation or FM intermodulation (as flutter is). Electronically this exists in all components but at infinitesimal levels -percentage-wise. And it was a leap of logic to think that a mechanical tape transport could or should be quantified the same way. So a weighting curve was naively established early on. Truth is the same audibility exists whether the IM is caused by the electronics or the transport. If we were presented with a piece of electronic hardware with the same levels as actually exist off-tape we'd throw the preamp out. This has been hard to explain to mixers and producers who think we are criticizing their work based on poor choices of console or monitoring or whatever. Fact is we are fixing the after-effects of the mechanical part of the process, which is much harder, both to accomplish, and to imagine as a source of distortion. 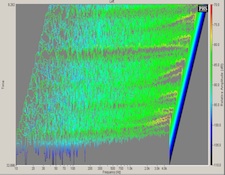 AP: How long did you work on the Grateful Dead Europe 72 project?

JH: About 14 months all together, from tests through transfer through processing. The rendering is non-real time - it's heavily over-sampled so the processing took about 8x real - time, after a lot of analysis and some revision of the hardware and software - we are always learning and improving... and it was a LOT of material.

AP: What was the most challenging aspect of the job?

JH: Well several things - one was deciphering the alignment - the early reference tapes for multi-track recording were not flat through the midrange and into the high end so there had been persistent misalignment for years. We've seen that a lot. One thing that is overlooked because of the whiz-bang digital processing part of it is that our playback techniques have had the same amount of scrutiny on all aspects of magnetic playback trying to move the needle since 1975.

We recently did a project we can't yet discuss where the DBX alignments were slightly off since forever on this particular well-known album because the traditional alignment procedures don't really provide the ideal flat playback.  But of course we have to be extremely careful to be sure that we are right when we disagree with the tones. In this case an early STL alignment reel had a hump in its response that lead to a misleading result. And the early Dead/Ampex collaboration had led to a hybrid IEC-ish record card pre-emphasis for the bass - we went back and forth on that, and the transfers sounded different than the previously existing NAB stock playback as a result, which we had to be sure we were on terra firma.  But we researched this with Ron Wickersham, who was with Alembic and before that with Ampex, so we surmised that the MM1000 that was destined for Europe had been set up with fixed record cals that were a little different than stock, which the AE's on the tour likely would never have been aware of when they set up the tones. That was challenging.

And the sheer volume of the effort was daunting. Jeffery Norman did a spectacular job mixing a tremendous amount of material in a limited space of time, and Dave Glasser was right behind him mastering what turned out to be well over 70 CDs... the largest single box set of newly-released material all time. 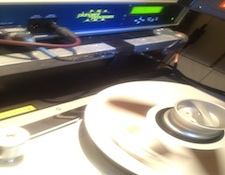 AP: What are you currently working on?

JH: As I type this I'm prepping to go to London to work on the live 24 track tapes from two mid-80s Queen concerts, among Freddy Mercury's last. That will be awesome.

AP: Do you have any plans to further refine the Plangent Process?