Are You Experienced : Jaco Pastorius Live

I'll admit up front that there are some of you out there who really know Jaco Pastorius' own music and playing inside and out. Dare I say, there are probably more of us who know Jaco's sound from his amazing, fruitful and important collaborations with other artists and bands. From his ascent with the jazz-rock fusion band Weather Report to his still magnificent and stunning work with Joni Mitchell -- Hejira, Don Juan's Reckless Daughter, Mingus, Shadows & Light -- and of course Pat Metheny's debut album, Bright Size Life, Jaco Pastorius' sound left an indelible mark on all of those recordings (and many others from the period). 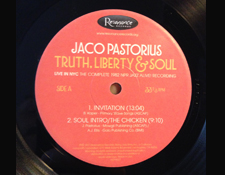 Jaco's emotive fretless bass sound and astounding technique indeed caused a revolution in bass guitar playing to the point where today he is justifiably regarded as the Jimi Hendrix of that instrument. In that light, it is interesting to consider that Hendrix' (arguably) finest documented performances -- recordings which captured his musical and spiritual essence -- were made on live concert stages.  Hendrix' legacy was etched into the history books based on incendiary early live performances such as The Monterey Pop Festival and The Saville Theater in London as well as, of course, at Woodstock in 1969. To that point, I do wonder if Jaco's career might have been even better served with more live recordings released early on to complement his reputation as a spectacular live performer. Frank Zappa certainly realized this sort of "X" factor (if you will) long ago as his career was blossoming -- many of his best recordings are based on live concert recordings which capture unique moments not easily captured in the studio.

Fast forward to the present, here we find ourselves exploring a fine, long overdue and almost-lost release of a legendary 1982 live Jaco Pastorius concert in its entirety: Truth Liberty & Soul.  Championed by producer Zev Feldman on the wonderful Resonance Records label, this beautifully pressed and packaged three LP (or two CD) set -- manufactured at RTI, mastered by Bernie Grundman -- is a fitting testament to Jaco the player-performer, Jaco the bandleader and Jaco the composer-arranger. 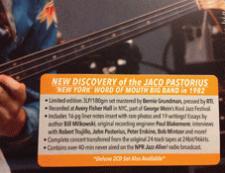 And while Truth Liberty & Soul will be a dream for hard core Jaco fans, it may also be an ideal entry point for those of you not quite so intimately familiar with Jaco's music, delivering a poignant snapshot of where he was going at the time. The 180-gram pressings on dark black vinyl are transparent so the music just leaps out of the speakers.  Actually, it is more than just the music -- the whole live experience is there, replete with a nice sense of concert hall ambiance and of course the audience's reactions to Jaco and his band's magical mystery tour.  I would love to hear this mixed into an immersive surround sound mix!  Of course Jaco's bass sounds amazing but also listen for the gorgeously mixed drums, with its super clear highs, sparkling cymbals and fat snare sounds. And then there are those horns! (More on that in a bit)...

Do I hear the pre-echoes of a demo disc to be played in high-end audiophile showrooms in the years to come? Heck, I'm pretty sure that by the time you read this review its probably already happening!

This show, recorded on two-inch 24-track analog tape at the former Avery Fischer Hall in New York City, June 24, 1982, was initially partly aired on National Public Radio for the Jazz Alive! series. Now for the first time you get to hear the entire concert, complete and uncut -- with 40 minutes of music not on the original broadcast -- fully and lovingly remixed from the original multi-track tapes by original producer Paul Blakemore. The long lost multi-tracks were transferred at high resolution (24-bit, 96 kHz) to digital platforms for mixing -- so this is a best of both worlds scenario: an analog master multi-tracked recording with the pristine benefit of digital mixing.

Jaco's playing of course is stunning but be sure to listen for the arrangements for this unique New York version of his "Word of Mouth" band (his second solo album from the period).... The arrangements are pretty astounding. I don't think I've heard a big band playing quite in such complete sync with its composer since Frank Zappa's 1972 big band era (The Grand Wazoo, WakaJawaka).

The players are stellar, with the rhythm section propelled by Jaco's former Weather Report bandmate, the equally-legendary Peter Erskine on drums. Then there is the horn section starting with the saxes: Bob Mintzer is joined by Lou Marini, Frank Wess, Bob Stein, Howard Johnson, Randy Emerick -- a sax army! The trumpet section is no slouch either with Randy Brecker at the core augmented by Lew Soloff, Jon Faddis, Alan Rubin, Ron Tooley and Kenny Faulk.  And for those of you who like to play connect-the-dots, do realize that a bunch of these guys were members of the original Saturday Night Live band from the 70s -- itself a legendary ensemble! -- and some of these players had crossed paths in other bands like Blood Sweat and Tears...

Toots Theilemans is a featured guest on Harmonica!

This band can play anything... and they do!