Some of you out there in audiophile-land might know that guitarist-composer Frank Zappa's favorite holiday was Halloween. And perhaps by design, he seemed to find himself on the East Coast around that time of year in the mid 1970s and into the '80s.  By 1977, Zappa's popularity in the NY metropolitan area had grown to the point where he could easily sell out a multi-event run of shows at a sizable venue like The Palladium (formerly known as The Acadamy of Music, a 3,000+ seat hall where The Band's Rock of Ages album was recorded, among others). So for a number of years, New York became Zappa's "North Pole," center of the universe for a now legendary series Halloween concerts, attracting thousands of fans and even making a film documenting the phenomenon.

My bit of personal "conceptual continuity" for this review of the amazing new Halloween '77 digital boxed set revolves around the fact that I was, in fact, one of said attendees at these events (I saw him on Halloween runs in 1976 - 78 and would have gone to more had I not been in college in upstate NY). My second ever Zappa concert was the early show on October 29th, 1977.  I would have loved to have gone to one of the other shows but tickets always sold out fast and given I was living on a non-existent teenaged budget, I was lucky to be even able to pull together the bucks to get to this one show.

So of course, when diving into this new and very special boxed set featuring every show from Zappa's 1977 NYC Halloween run -- that is six shows, nearly 16 hours of music, recorded from October 28th through 31st -- I begin with the performance I was at.... simply because... I was there! 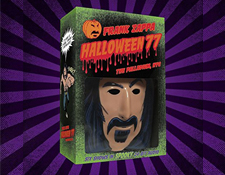 For those of you concerned about fidelity, these recordings were restored, newly mixed and mastered by Craig Parker Adams from the original analog multi-track sound board masters (originally recorded on Scotch 3M 2-inch 24-track analog tape via the RCA Mobile recording truck). This music comes to you in LPCM Stereo via 44.1 kHz, 24-bit resolution WAV files all housed on spiffy, nearly 20-gigabyte USB flash drive stick. You can also stream this set in similar fidelity in the MQA codec via the Tidal subscription music service. These recordings generally sound wonderful, although don't go into this expecting the overdubbed wonderment of later albums where some of these songs eventually appeared (notably 1979's Sheik Yerbouti). One the underlying charms of this set is that there are no overdubs or fixes (other than some restoration edits to repair bad channel issues which existed on the master multi-tracks, all detailed in the enclosed PDF booklet). This is pure 1977 Zappa as it went down those nights.

To that point, one of the rather stunning things -- and, frankly, it shouldn't have been stunning to me given I've been a Zappa fan most of my life, but still ... I had one of those "ah ha"  moments -- when listening to these recordings is simply the realization of just how much NEW material Zappa was foisting upon his audiences at these shows. These shows were recorded and filmed for the eventual movie Baby Snakes so much of the music being performed most of us had never heard before. That is a pretty amazing thing to grok: Zappa believed so strongly in his material, his band and his fans that he would breakout entirely new material while making a full-on Hollywood style production concert movie (this wasn't cobbled together with a bunch of GoPro's kiddies) that wouldn't get released until many years later, when the songs were indeed established fan faves. 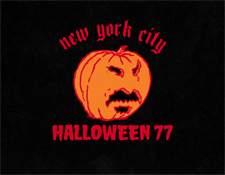 In these 21st century times where artists and bands have been ridiculously pushed-back-on by fans who grumpily only want to hear full albums of their favorite records performed exactly like the studio sessions in concert, it is really super refreshing to look at the set lists for all these shows and remember that it wasn't always that way. Going to a live concert used to be mostly about being challenged and surprised by artists (and thankfully for some artists it still is about that!). But still, I feel sorry for so many people these days who go to shows only to hear, essentially, reproductions of the studio recordings -- they are missing out on something special, riding the tight-rope high-wire of discovery.

About half of the show I saw on the 29th in 1977 was comprised of material that was at that point unreleased. Songs like "City of Tiny Lights," "Tryin' To Grow a Chin," "Jones Crusher," "Wild Love" and "Flakes" would not be issued on records and tapes until 1979. "Envelopes" didn't see the light of day until 1982's Ship Arriving Too Late To Save A Drowing Witch.  "Conehead" didn't show up until 1981's You Are What You Is but frankly this early instrumental version bears almost no resemblance to that version of the song's evolution (making this incarnation all the cooler to hear!). Heck, songs recorded the prior year for the Zappa In NY live album weren't heard by most of us until 1978 when that album came out, including "The Black Page #2." "Punky's Whips" was censored out until the CD edition came out many years later. Some of the music from Lather, the then-unreleased album of the same name did get released on three Zappa-unauthorized albums put out at that time by Warner Brothers, Studio Tan, Orchestral Favorites and Sleep Dirt as well as the aforementioned Zappa in NY album (the title track). 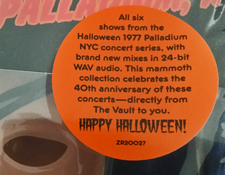 So... really, way more than half of these shows we saw that year featured brand new material no one had heard before -- a handful of songs were from albums that were out at the time. But you know what? Everyone loved it! Seeing a Frank Zappa show was an event, and every show was a little different and we were all there for Frank and the journey he and his band would take us on.  And what a journey it was...

These shows also marked, for those in attendance, the unveiling of the great and influential guitarist Adrian Belew to the music universe. During the song "Wild Love" all the band members were given a solo spotlight and to listen to Belew's moment in the spotlight 40 years hence is akin to uncovering a lost treasure of music history, presented clearly in all its 24-track, high fidelity glory. The mesmerizing sound the soon-to-be Twang Bar King was making here -- the man who would soon transform recordings by David Bowie, Talking Heads, King Crimson and so many others -- was basically birthed here on Zappa's Palladium concert stage, fairly fully formed. Adrian unleashed his masterful whammy bar-driven, backwards-sounding, growly-animal-flavored guitar monsters to an unsuspecting audience (and he was doing this sort of thing pretty much before anyone else as far as I know, at least that I remember hearing). I do remember being "wow'd" by his playing at the show and definitely became a fan at that point as he soon started to appear on other artists recordings as well as his own albums. A pioneer in that sense, Zappa no doubt knew he'd discovered a special player in Belew while out on the road. Accordingly, Belew writes some of the liner notes to the digital booklet included with the set. 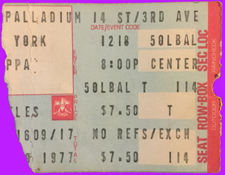 If you have heard any of Zappa's live albums --  Zappa in NY ,  Roxy & Elsewhere or even Fillmore East: June 1971 -- you know that Zappa's music is incredibly precise, complex and ultimately fun. This '77 band was pretty stunning, with drummer Terry Bozzio frenetically holding the group together while simultaneously keeping it on edge. Patrick O'Hearn swings, swaggers and sways on fretless bass.  The twin keyboard army of Peter Wolf and Tommy Mars create an orchestral wall of sound and percussionist Ed Mann percolates in and around it all. And of course Frank and Adrian were dueling guitarists  extraordinaire.

I'll be going into more detail about specific songs and performances in part two of this review series as I dig down into the other shows, but I wanted to get this first installment out in time for the holidays to share my initial take on it and of course to wish you all a very safe and Happy Halloween!

Music is the best!