How to Get Better Bass Part 11

During the course of this series on loudspeaker bass performance, one of the things I've said many times is that the primary reason for a speaker to have an enclosure is just to keep the back wave from the moving diaphragm from meeting the front wave and canceling-out.  Another thing I've also said more than once is that horn speakers, even disregarding their other obvious advantages, would undoubtedly have achieved their initial popularity and broad application just because amplifiers in the early days of audio had only very limited output and horns, with their much greater sensitivity than any alternative at the time, were simply the only thing  available that would play loud enough for the movies, concerts, sporting events and other venues that involved large spaces or large audiences. 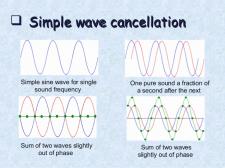 Those two things are both true on the face of them, and supporting documentation for them is both readily available, and was amply provided in the form of hyperlinks included in my articles each time they were mentioned.

Things change, though, and as I said in Part 10 of this series, one of the two -- the whole power limitation thing -- no longer exists: Amps of any kind, either tubed or solid-state, are now available that will deliver hundreds of Watts of reliable power at easily affordable prices and, for the most part, in livable sizes and weights, and levels of heat output (except for "Class A") that won't drive you out of the listening room. There's even the Class D "switching amplifier", of which the first example I know of was the Infinity "Swamper" (= SW itching AMP lifi ER) from way back in the 1970's. Class D amplifiers can, in a super- compact, cool-running (no big and heavy heat-sinks required), highly efficient (that's why there's less heat to dissipate) format, produce thousands of Watts of power easily and cheaply. The earliest switching amps weren't all that good-sounding, probably because  of the way they "amplify", but times have changed, and now the most modern switching amps can hold their own against practically anything.

The other thing - the front wave/back wave cancellation thing, is still around, but is still (yes, the pun is intended) baffling.  If you want to check it out for yourself, just listen to any speaker system  and then take the woofer out of the box, still attached to its wiring (if the wiring is too short,  you can use test leads with alligator clips at each end to extend the leads from the crossover to the woofer so that they'll reach to the woofer when it's out of the box) and listen to it on the same music: Hark! No bass; there is cancellation-caused bass loss going on, and the box does do what it's claimed to do!

But what about panel speakers? Those, by definition, don't have a box, and both the front and back waves off the diaphragm are radiated out into the room, where they can meet and (shudder!) cancel; how can they make bass? Do they make bass? 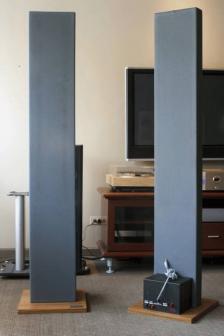 As you may already know from other articles, I own and use three pairs of Acoustat model 1+1 speakers. Those are electrostatic panels,  each 11 inches wide by 7 feet 10 inches tall by 3 ¼ inches thick, and are  - obviously smaller in every dimension than the half-wavelength of any deep bass frequency. (Even the 7'10'' - call it 8' - height of the panels is still equal to the half wave-length of a frequency of just 70Hz when the speed of sound is calculated as 1125 feet per second. [1125' ÷ 70Hz  = 16'. 16'÷2 = 8', the height of the speakers] Even so, the Acoustats claim and may actually deliver a frequency range of  35 Hz - 20 kHz +/- 3dB. That means, of course, that - even if they do as they say, they can still be down a full 6dB (equals only 25% of 0dB output) from their peak level at the frequency extremes. I use subwoofers with them, but that's only because I'm a bass freak. The speakers, all by themselves with an appropriate amplifier, (I use amps from Rowland, Krell, and VTL) make quite satisfying deep bass - even for a Kodo drum or a crazed pipe organ at full charge.

So how do they do it? Equalization. Much as the first acoustic suspension speakers lowered their overall sensitivity to get deep bass down into the low 30s, the Acoustats run separate bass and mid-top transformers so that they can lower the upper frequency output to match a boosted bass response equalized to overcome the effects of front wave-back wave cancellation. This loses overall sensitivity, bringing it down to (if I remember correctly) only about 82dB at 1 Watt/1meter, but it does make bass. And with a modern high-power amplifier, will make (the manufacturers claim) 108dB @ 18inches in a 14' x 22' room. (Weirdly, as with many panel speakers, because the farther you are from the panel, the more of its total area you're listening to, the Acoustats actually seem to sound quieter as you get closer to them).

An 82 dB sensitive speaker like the Acoustats will take 10 watts to make as much sound as one that's 92dB sensitive, so there's one example of how sheer power can be used to overcome bass loss, and there are plenty of other examples available. Before getting to them, though, let me say one thing to put all of this into perspective: 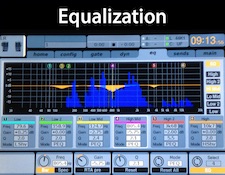 Frequency response is not absolutely delineated. When a product that claims a frequency range of 20 Hz to 20 kHz (or whatever), that doesn't mean that it stops performing entirely either above or below those "limit" frequencies. Instead, it will "roll off", either at a fixed or an accelerating rate, making less and less sound the farther it gets above or below the "limit". It will never, however, stop producing sound -- or at least diaphragm movement -- entirely. That's why it may be more important to know the variance (plus or minus 3dB, for example) than the limit frequencies, themselves. It's also why some unscrupulous manufacturers of off-brand goods have been able (we've all seen it) to claim undefined "20 Hz to 20kHz" performance for cheap gear that could never make the grade if rated fairly.

The most important thing about it, though, may be that - if a product is, for whatever reason, way down (20dB, for example) at deep bass frequencies - it may, given enough power and the possibility of sufficient diaphragm movement, be able to be equalized to become an outstanding deep bass performer.

One such product used more than two thousand Watts of Class D power to create a whole new sub-woofer technology. I'll tell you about it next time.