Dirt Roads and Diamonds-Why Being a Reviewer isn't Always Glamorous 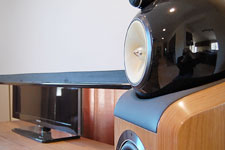 So, you want to be an audio reviewer?

Sounds simple enough, not to mention awesome, and for the few of us who get to live the dream I assure you it is, at times, awesome. Though it's not all champagne wishes and caviar dreams for not every product fits neatly into a rack or is as lightweight as an AppleTV. Not to mention that while many of us writers, present company included, often suggest that the reader have their local dealer or installer install new products in their home the fact remains that we (reviewers) are often not afforded the same opportunity. A fact that isn't lost on our spouses or close friends when it comes time to move those 300 plus pound speakers into the living room. But please don't think that I'm asking you to bust out the violins for us poor reviewers who get to listen to some of the finest gear on the planet for FREE it's just part of the job, which in my case got a lot more interesting since I moved to the country.

Prior to this year I lived in an average sized, two-story home in the burbs of Southern California. My main listening space resided on the main level just off the garage with easy hand truck access to and from. Minus the occasional HDTV or soundbar most everything I reviewed, big or small, was installed in my main level reference room.

Late last year my wife and I had the opportunity to move into a house on some land in the Angeles National Forest, which is about 90 minutes outside of Los Angeles and a good 45 minutes north of our suburban home. We jumped at the opportunity for numerous reasons and in mid to late September of 2010 we made the move. Our "new" home was built in the late 30's and as such underwent some extensive renovations prior and during our arrival. The house sits on three and a half acres and is nestled in a natural quartz and red-rock valley with 360-degree views of the non-charred (the Angeles National Forest was the local of the devastating Station Fire that rocked California a few years ago) side of the Angeles National Forest. Sure, we gave up a few creature comforts such as city water and utilities, uber high-speed Internet (no more Hulu or Netflix streaming for me) and cell phone reception; my wife and I still believe that the move was a step up in terms of quality of life, which is why we did it.

But what does all this have to do with being a reviewer? Did I forget to mention the two-mile long dirt road; yeah you have to traverse a two-mile dirt road to get to my home.

Besides moving and renovating, late last year marked the arrival of the famous Bowers & Wilkins 800 Series Diamond loudspeakers to my home. I was slated to review the iconic beauties since being introduced to them at the CEDIA show in late 2009. A full year later and my review pair were ready for their close-up, the only problem was that they were originally supposed to be delivered to my previous, suburban address, but now were going to have to be re-routed to my new mountain home.

The catch, the trucking company took one look at my road and said, "yeah right!"

An alternative location had to be found and found quickly for I wasn't about to have a pair of $24,000 loudspeakers be returned to sender. I arranged for the truck to drop the 800 Series Diamonds off at a friend's house, who happened to be my wife's boss. He lived in the area and while his home had a dirt road too, apparently it wasn't scary like mine. So the truck dropped off two LARGE boxes containing the 800's strapped within an inch of their life to a pallet which was then wrapped in enough plastic and shrink wrap to cover the moon. The shipping bill said the total weight of the shipment was somewhere north of 500 pounds. Damn.

Realizing that the boxes were not going to fit in our Ford F-150, at least not right side up, we improvised. With the help of a Bobcat (a small tractor with a front mounted scoop or bucket) we used truck straps to hoist the speakers into my friend's tiger trailer. That's right, I said tiger trailer. My wife and her boss are exotic animals trainers for television and movies and yes they have a tiger; they also have elephants, monkeys, pelicans, horses and more but this story isn't about them-it's about being an audio reviewer.

With the 800's still in their boxes and in the tiger trailer we were ready to begin the 10-mile journey to my home. The ride up our two-mile dirt road was about as dramatic as an after school special and a trip the trucking company could've EASILY made. It was when we arrived at my house did we realize we had a problem. I don't have a Bobcat at my house. Well, being MEN we did what men do and put our two brain cells together and MacGyvered the 800's out of the tiger trailer and onto my drive-way, which is a fancy way of saying we dead lifted the whole enchilada with zero concern for our personal safety or health, something smarter men would've considered. Confident neither of us had a ruptured disc or a burst testicle we began cutting through the yards of plastic, metal straps and packing tape until we were down to just two boxes.

It was at this time my wife returned from Lowes with so-called moving straps to aide in our endeavor-straps that would've been useful thirty minutes prior. Still, we looked over the packaging and the image of the two women hauling a refrigerator while carrying on a conversation with one another without a hint of strain and thought to ourselves-if they can do it. So, we maneuvered the boxes, one at a time, over the straps, secured the straps to our forearms and prepared to lift. In theory we were supposed to place our palms on the side of the box, lift with our legs and let the straps take the weight. In reality, my friend lifted on the count of TWO instead of the customary THREE sending the 800, still resting comfortably in its box, crashing into my face. I don't know if many of you have stopped close to 200 pounds with your face but if you haven't let me tell you it's a feeling that you can go ahead and leave off your bucket list. After a ten-minute lets make sure Andrew doesn't have a concussion break we tried again-this time with success. The second 800 loudspeaker, again still in the box, made the trip into my living room with even less drama.

Thankfully, Bowers & Wilkins designed the boxes for the 800 Series Diamonds to literally fall away from the speakers once the straps and lid have been removed. They're also smart to have the speakers mounted on wheels for had they not been I'm not sure I would've been able to get the beasts into position because by this time my arms, legs, shoulders and head were in a world of hurt.

So, while being a reviewer has its advantages it also has its drawbacks and while not every equipment installation story is as colorful as the one I've just described they're always an adventure. Like the time I...