Twenty years ago if you asked an audiophile what was the best headphone in the world they would have answered, without hesitation, "Stax." You could say that Stax was the essential high-performance headphone. Classical recording engineers including one of my mentors, Micha Shatner, all used Stax headphones for critical on-location monitoring. Flash forward to five years ago, when the proliferation of high-performance headphones began to explode, even then Stax was still at the top of the heap. Nowadays there are a number of new headphones that have percolated to the top echelons of the headphone hierarchy, but Stax remains up there with the best. 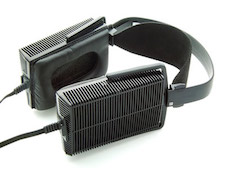 As someone who's been using Stax earspeakers (how dare you call them merely headphones!) for over 25 years I had a lot of experience with their Lambda Pro series, beginning with the first version. I currently have a Lambda Nova Signature model that has been with me for well over fifteen years. I also have the newest SR-L700 Lambda model for review. And while I'm going to save sonic comparisons for the future review, the new Stax did make me aware that my pair of Lambda Nova Signatures needed some tweaking.

Anyone who's owned Stax as long as I have has, inevitably, had to acquire a replacement part or two. The primary weak points in the Lambda Pro design have been the headband and headpad. A Stax Lambda yoke will set you back at least $150 while a new leather headpad costs $50. I've had to replace both of these parts on my Signature Novas during the time that I've owned them. 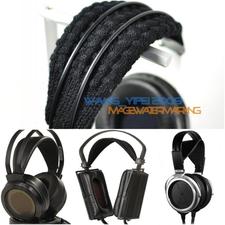 When I compared my pair of Stax with the Latest SR-700 I realized that over the years the leather headband on my pair of Stax had stretched slightly, which for most owners would probably not be a big deal, but for me with my smallish head, it meant that my pair of Stax were sitting too low on my ears. I could simply replace the headpad at a cost of around $60 (once shipping charges and tax were included), but I found an alternative that is far less expensive and had an added attraction.

Perusing EBAY listings for Stax I came upon this offering - "Pure Wool Headband Cushion For STAX" for a $12.02 delivered. And what it was is pretty much exactly what the headline said it was - a knitted, wool cover that went around the leather headpad and attached via a series of small snaps. Now instead of a thin leather pad my Stax had a thicker, soft woolen pad which very effectively raised the headphones on my head so that they now sit exactly where they should in relation to my ears. 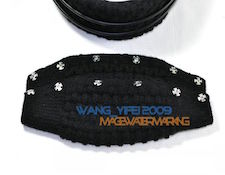 The Woolen pad fits the Stax headpad perfectly and has another added attraction - on hot days it's much less likely to generate a wet spot - this is especially true for any male Stax owner who's follicley-challenged. The wool sure beats leather next to bare skin. Even those who are still blessed with a full head of hair will find the wool cover more pleasant than leather on warm days.

Does the pure wool headpad cover have any drawbacks? Except for making your Stax headpad look like aunt Mildred's tea cozy (complete with crocheted geometric pattern) which could be a bit too artsy-craftsy for some, the other primary limitation of the headband cushion is that it is only available in black, which does make it stand out against my brown headphones. But for $12, delivered, I dare you to find a better Stax accessory...