A Useful Tool - The Samson QH4

Although the name of this site is Audiophile Review, we rarely review gear here. The reason is that this site is primarily for opinion, not hardware reviews. My own gear reviews go to either The Absolute Sound or Home Theater Review. But occasionally I come across a device that doesn't fit into TAS or HTR's purview, but I feel deserves some exposure. The Samson QH4 4-channel headphone amplifier is one of those between-the-categories products. 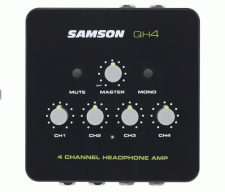 The Samson QH4 ($69.99 MSRP) was designed primarily with home recording studios in mind. Its primary function is to change one line-level (or headphone level) two-channel signal into four two-channel signals. That way four different headphones can get a feed from the same source. The QH4 is housed in a 4.88" by 4.88" by 1.57 chassis with a plastic top plate and an aluminum case and weighs less than one pound.

Input options for the QH4 include one pair of 1/4" TRS inputs as well as a 1/8" mini-stereo input. There is also a 1/8" mini-stereo output, so you can daisy-chain a second QH4 if you need additional headphone outputs. The QH4 is powered by an external 15-volt wall-wart. The QH4 has four standard ¼" stereo headphone outputs, each with its own discrete volume control. The QH4 also has a master volume as well as a mono/right-left summing and a mute button.

According to the QH4's specification sheet, it is capable of producing 282 mW of power per channel into 32 ohms for a maximum output of 14 dB of gain. The QH4's dynamic range is 122 dB while its noise floor is -114 dB unweighted.

So, this is a single input, multi-output headphone device made for studio use - how does that figure into a high-performance audio system? I use it to compare headphones.

The primary issue I have when I need to compare to headphones in an A/B set-up is the time required to switch from headphone A to headphone B. The quicker the change-over, the more accurate the A/B analysis will be. The Samson QH4 saves time in several ways. First, I can have two headphones hooked up simultaneously. Second, I can have their levels matched more accurately than when using a single headphone output since I can set the levels for the two (or more) headphones once and then I won't need to readjust them during the listening sessions. 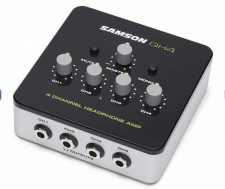 Currently I have the Samson hooked up to the output of an AudioQuest Dragonfly Red which is being fed by the USB output from a MacBook Pro 13" Retina routed through an IFI micro USB 3.0 power supply/USB filter, but I've used it in a variety of set-ups - anytime I have one headphone output when I need more than one, all of exactly equal quality. Right now I have a Monoprice M-1060 (96 db efficiency), HiFiMan HE-1000 V2 (90 dB efficiency), and Earsonics S-EM9 in-ears (121 dB efficiency), all hooked up to the QH4. All have their levels matched even though the HiFiMan is 21 dB less efficient than the Earsonics. Also, there is no hiss from the Earsonics even when I turn the gain levels (with no signal) well above comfortable listening levels.

When I have the QH4 all set up with matched levels for critical comparisons I can consistently switch from one headset to another in slightly less than two seconds. With a single headphone output the fastest switch I can muster requires at least ten seconds. When trying to compare and contrast headphones the difference between a switch that takes under two seconds and one that takes more than ten seconds is enormous. A two-second switch-over yields far more useful and reliable results than one that takes more than ten seconds (and also requires readjusting the gain levels after each switch).

If you are a devotee of the Head-Fi site, you're familiar with the headphone-modifying message threads where enthusiasts make changes in the cushions, filters, cables, and other replaceable components in a pair of headphones to improve their sonics. If only some of these folks had a QH4 so they could compare a stock and modified pair of headphones in A/B comparisons between the pre and post modified examples in matched-level tests I would have far more faith in the veracity of their reported findings.