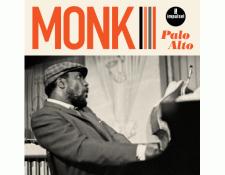 I'm a bit mesmerized, sitting here listening to some newly released music by Thelonious Monk and finding myself transported back in time... Transported to a location probably 45 minutes from where I live here in San Francisco... Imagining what it must have been like to be at this wonderful and fascinating concert which was the site of an historic moment in Jazz history.

I am playing an advance CD-quality download of the much anticipated new Thelonious Monk album titled simply, Palo Alto.  This is an archival release which has a fascinating backstory that is in many ways more important than the underlying recording here.

Part of what likely sets this 1968 recording apart is the edgy energy of an unplanned concert before a diverse audience at an epicenter of racial tensions. This all took place during a charged period between divided East Palo Alto and Palo Alto, in the aftermath of the assassinations of Martin Luther King and Robert Kennedy.  The concert successfully brought together many audiences -- young and old, black and white -- in a moment of healing and peace. On Palo Alto, we hear Monk performing in a high school auditorium before a sold out crowd of 350. 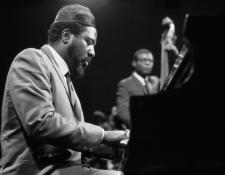 Even Monk's son feels that Palo Alto is a special event:

"That performance is the one of the best live recordings I've ever heard by Thelonious," says T.S. Monk, son of the pianist/composer maestro, drummer and founder of the Thelonious Monk Institute. "I wasn't even aware of my dad playing a high school gig, but he and the band were on it. When I first heard the tape, from the first measure, I knew my father was feeling really good."

Monk's playing is indeed assured and energized, and the band responds in kind. Engaged and exciting, Monk and his band deliver fine versions of classics like "Ruby, My Dear," "Blue Monk," "Well, You Needn't" and "Epistrophy" in the short but powerful set.

The performance was squeezed in during Monk's two-week run at San Francisco's Jazz Workshop. The show was organized by a 17-year old high school student who went onto to become one of the most successful concert promoters on the West coast, working for Bill Graham for 20-plus years!

The liner notes are written by the promoter, Danny Scher, as well as by Robin D.G. Kelley -- the latter whom many of you may know wrote the definitive biography on Monk. He has many positive things to say about the performance as well.

I'm quite knocked out how good Palo Alto sounds both as a performance and a recording.  This is especially true given that the recording was made by an unnamed janitor (who offered to get the piano tuned in exchange for permission to record the show!). 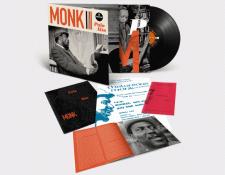 The recording on Palo Alto presents the band in nicely staged Stereo.  The tape source is remarkably clear with little in the way of drop outs and other anomalies one might expect. But, it is no doubt a warts 'n all type scenario so don't be surprised to hear the stage or Monk's piano stool creaking at times!  For a recording made by an unknown amateur it sure sounds good!

This release was delayed for several months, I suspect due to the Covid 19 pandemic -- when essential infrastructure supporting the music industry is operating on skeletal staffing, most working from home. Given that I only had access to a CD-quality download, I am calling this, accordingly, a "preview" in hopes that eventually I will get the vinyl version for a fuller follow-on audiophile review. Hopefully there will be a high resolution version available on some of the streaming services.

As soon as I get the vinyl in hand I'll be sure to post a follow on review. But so far, Palo Alto sounds like a winner of a release. Monk fans will need this for sure.