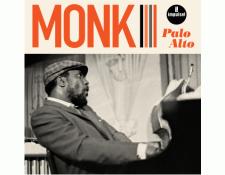 Just released on the Impulse Records label, there are two incarnations of the new album by Thelonious Monk called Palo Alto.  I received review samples of both the stock edition on black vinyl (from Universal Music Group) and the limited numbered edition (1500 copies) on lovely creamsicle orange colored wax as issued by custom music club Vinyl Me Please.

If you missed part one of my review of Palo Alto based on the advance 24-bit, 44.1 kHz pre-release download, please click here as it offers much background about the concert and why this recording is especially significant (and why many Monk fans are justifiably excited about this discovery!). 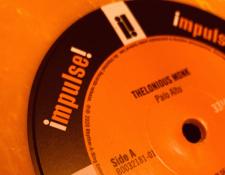 This recording sounds remarkable even though it was probably made on semi-pro or even consumer-grade equipment of the day and kept in storage for 50 years!

The big question I suspect that is on the minds of many of you out there in audiophile-land is: does the black vinyl version of Palo Alto compare favorably to the orange pressing from Vinyl Me Please?  I am happy to report that in general, yes!

Both standard weight editions are basically quiet with regard to surface noise and such. Additionally, both versions came well centered as well, which is a key factor with vinyl records -- piano based recordings are especially susceptible to those pressing woes, so I am always happy to see when an album is not off center at all! 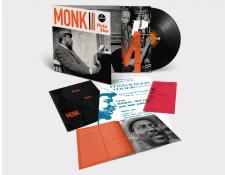 My black disc did arrive quite warped however, yet it plays just fine. This is something I can't fault the label for given it might have been damaged in shipping during this global warming heatwave we're having out here in California. I just bring this up as an FYI to keep an eye out for in case it is a manufacturing anomaly.

Of the two, the Vinyl Me Please pressing of Palo Alto seems to be a tad more sturdy (as in thickness).

In the run out groove of both albums you can see the tiny stamp from Sterling Sound which cut the master lacquers -- yes, both pressings appear to share the same stamper numbers. 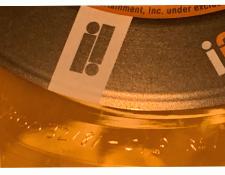 That was hard to photograph but I was able to capture images of the Side B run out groove serial numbers so you can see how they match up here (if you click on the image it should expand to a larger size on your screen). In theory both versions should sound about the same. Indeed, both sound very close, sonics wise.

If you'll allow me to admittedly split some teeny tiny audiophile hairs, the VMP version seems to project a slightly different character to the music for some reason, dare I say even timbre. [Hey, you in the back row, please stop rolling your eyes!  (grin)].

Perhaps it is the composition of the colored vinyl formulation and how my particular stylus is interacting with it resulting in this sort of sonic fingerprint. 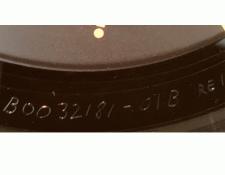 I've heard about there being physical difference in certain vinyl formulations on some records in the past. The point here is that depending on your perspective the VMP might sound a wee bit brighter than the stock edition.

Is that a bad thing? Not necessarily -- in fact, you might well prefer it that way!  I certainly got used to it after playing both versions back to back several times this afternoon while writing this!  Who knows: maybe the black pressings were made a bit later in the run? 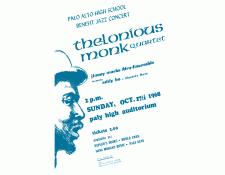 Some of you, Dear Readers, by now may well be justified saying: "Who cares!?

To which, I probably have to agree! Both albums sound good all things considered, and that is a wonderful bottom line to be able to report back to you all.

Palo Alto comes with some great bonuses making the vinyl package extra appealing for collectors: a lovely booklet features an authoritative essay on the album by acclaimed Monk biographer Robin D. G. Kelley (Author of the fantastic biography: Thelonious Monk: The Life And Times Of An American Original). 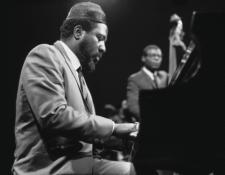 The album includes a reproduction of the original program given out at the concert and a the  poster used to promote the show back in 1968. In this day and age, it is pretty amazing to get all those goodies with an archival release!  Bravo to the producers of this set for being so thoughtful to the fans.

Anyhow, at the end of the day the important thing is that the music on Thelonious Monk's Palo Alto was discovered, restored and released in a variety of formats. Whatever way you listen, this album is one of the most important releases of 2020. You'll definitely want to get this.