The Good, The Bad and The Ugly from Rocky Mountain Audio Fest 2018

The flight back from Denver just landed, and while I couldn't spend a whole lot of time at 2018's Rocky Mountain Audio Fest (RMAF), I do have a few hot takes from the show for those of you who didn't make it. 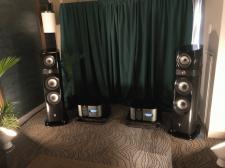 This was the last year the show will be held at the very tired Denver Marriott Tech Center hotel. My taxi ride from DIA was $120 and my Uber back to DIA the next day was over $130. A first-class round-trip ticket from LAX to DIA and back was about $550 to put the drive into perspective. In moving to an airport hotel, time and money will be saved and hopefully RMAF will be able to offer a cleaner, more modern and relevant space for exhibits in ways that more effectively competes with AXPONA in Chicago. If they can't, at least they can help the Free Masons enslave audiophiles at DIA (read the actual conspiracy theory that I just learned about regarding the DIA airport here.

I saw Mike Levy from Alta Audio and Walter Schofield from Krell doing a demonstration for college kids in their room. I've long been calling for this type of outreach. Kudos to them for realizing that you can't make a sustainable living in audio selling yet another $10,000 preamp to 70-year-old Baby Boomers forever. Sorry, it's just fact. This hobby needs a new generation of supporters.

Gauges don't affect the sound of electronics, but God damn are they cool, and I saw them aplenty at the show. The super-sexy Anthem STR gear (reviews pending later in 2018) I saw on the floor looked amazing powering Paradigm's reference Persona bookshelf speakers. D'agostino Audio's steam-punk industrial design comes with perhaps the industry's coolest and most expensive gauge. Classé Audio is back and their gauges are pure digital sex. Others had cool screens and gauges, including Naim Audio and many others. I know, I know, the "sound is all that matters" crowd will poo-poo my focus on aesthetics, but they matter because cool factor makes me want to pull out the Platinum card. And trust me, friends--at RMAF, many of the products require the buying power of a Platinum Card and maybe even some low-interest, long-term financing to go with it. 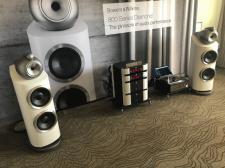 More rooms were offering refreshments for show attendees. Paradigm had an entire bar, snacks, candy and bottles of water. I saw enough good-level, Costco-sized candy that I thought I was going to ask someone for a syringe of insulin to deal with temporary diabetes from all of the little Reese's Peanut Butter Cups that I swiped from room to room. Nevertheless, it's good to make people feel welcomed when they enter your room.

I didn't get to hear the results, but I like that MQA was recording and playing back (on a large-scale Focal rig) music recorded on the spot. I liked this when Sonus faber did the same at their event this summer in Kansas City, and I liked it here at RMAF. Giving audio enthusiasts an inside look at the recording process makes them more informed consumers and hobbyist.

More rooms were using good acoustical treatments to deal with less-than-perfect room conditions. GoldenEar, B&W, Classé, Paradigm, MartinLogan & D'agostino, Focal, Tekton, Wilson's dealer--who was showing their new bookshelfy speaker for $10,000 a pair--and so many others. Keep up the good work. Audio enthusiasts know that that hotel rooms tend to sound ass-y compared to a good retailer's demo room or even your listening room at home, but the lure of hearing so much audio in one place makes these audio shows compelling. Fixing room maladies just makes the audio world a better place.

RMAF is a 100 percent sausage party in terms of demographics. The only women there were wives dragged to the show by their audiophile husbands--and many looked bored. RMAF should aim to find a way to engage new attendees that have two X chromosomes. 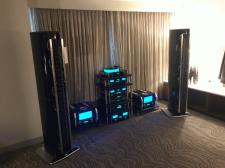 I know I mentioned this already, but the Denver Tech Center Marriott venue is really tired, and even suffering this venue for one last year was a downer. I mean, c'mon--you can't pressure the Marriott to bust out a few cans of paint for the hallways and the stairwells considering that's how many people experience the show thanks to very crowded elevators? Some fresh carpet could have gone a long way, too. Stacking a bed frame in one of the hallways on one of the floors was just outright dangerous. The new hotel hopefully (almost certainly) will be better. God help me, if I have to call the Illuminati to make things better, I will. I hear said Illuminati have secret offices at DIA now, which is nice.

As compared with other comparable shows, the music I heard as I was walking about RMAF was just terrible. Let's be honest with ourselves: audiophile music sucks. It always has and always will, no matter how good the recording is. I specifically rewarded rooms playing RIAA Platinum-selling, critically acclaimed music. I walked past countless others playing obscure or clichéd tracks from the likes of Rebecca Pidgeon and Livingston Taylor. I did hear a good rendition of "Red House" and "Out on the Tiles" in rooms that I would have never entered otherwise, and I ended up in there spending more time than expected.

When will audiophiles learn that vinyl is an inferior format? Relying on a physical platter with high distortion and 65 dB dynamic range is like building a mighty skyscraper of musical playback on quicksand. But you know what? Vinyl was everywhere at RMAF. The Denver Audiophile Society needs to start preaching about the fact that an audiophile can stream high-res audio with nearly unlimited access to every meaningful recording ever made for $20 from two different sources (upstart Qobzz and Tidal). Or that you can buy 24-bit HD music for about $20 an album and play it back from a growing number of excellent music players/streamers that are truly affordable.

Ferraris don't run better on 50 octane gas, and audiophile systems don't sound better on vinyl, even if the format holds nostalgic power over the elders of the hobby who fight anything new. 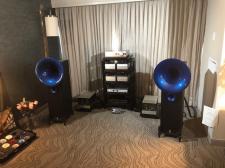 I couldn't find any meaningful video anywhere at RMAF. Real-world buyers are just as likely (if not more likely) to buy a $4,500 65-inch Sony Master Series OLED TV as a pair of good audiophile speakers driven by excellent electronics. People with the money to buy audiophile gear likely also watch movies on Netflix, Amazon Prime, and Hulu in 4K. To keep these two worlds divorced shows RMAF's lack of vision about a) who can actually afford expensive audio gear and b) the pending future of the hobby/business.

Another constructive memo to the Denver Audiophile Society would be to remind them that, in 2018, the video game industry does more business than the entire music industry and all of Hollywood combined. Kids are winning $250,000 playing Fortnite. They love high performance equipment. What's being done to bring that booming audience to help transition the hobby from 60- and 70-year-olds? At this year's show? Not a thing.

When Bill Curtis owned Stereophile and Home Theater Magazine, he threw an event in Orange Country that was like everything he has ever done: first class. Not only did the show embrace the absolute best in audiophile systems, but it had killer, never-seen-before home theater and video setups. But what Bill did that none of these other shows do correctly is that his show had media partners. I am not talking about Stereophile, TAS, or even HomeTheaterReview.com. I am talking about, in Bill's case, The Orange County Register. He pumped well-heeled people from all over the sun-drenched locale of the OC into his show. Retailers did their best to woo said Bentley-driving potential buyers. What if RMAF shared $5 per ticket with The Denver Post to help promote the show in September and early October in return for promotional considerations? What about raising ticket prices $5 per day to allow for a budget for radio and television promotion? We need new blood in this hobby and nothing is being done, despite the past success of mainstream marketing for specialty AV shows.

Overall, RMAF 2018 had a lot for the audiophile to enjoy. It didn't change any stereotypes or norms but it really offered the already-initiated the chance to experience the world's largest stereo store at a time when stereo stores are dying faster than 1980s pop stars. And for that reason alone, it was worth the flight out from Los Angeles. Hopefully, the new venue will offer a big improvement. Even more hopefully, the Denver Audiophile Society will take the constructive comments above to heart and realize that they play an important role in the future (or lack thereof) of this hobby.