In the old days before walk-around wireless microphones for singers and other stage performers, the artist would move about the stage as necessary for his/her act or for best rapport with the audience and occasionally a brief "shushing" sound or something like a click or a thud would be heard from the speakers of the sound reinforcement  (They used to call it "PA") system. 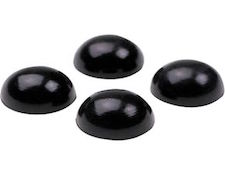 Originally thought of as just a fluke or a glitch in the system's power or elsewhere, these sounds were eventually traced to "triboelectricity" or to a rough equivalent of piezo-electricity -- one that instead of coming from the flexing or rubbing of crystals (the same thing that produced the voltages in crystal or ceramic microphones or phono cartridges), came from the flexing or rubbing of the polymer insulation of the microphone cables:  As the cable was dragged along the ground, following the performer, voltages would build up on the surface of its insulation, which would eventually be discharged through the system to produce the shushing, clicking or other sounds.

A very similar problem was found when car audio systems became good enough (and complex enough) to allow people to hear it: Particularly where longer runs of wire (as from a forward-mounted "head" unit to a rear- [trunk or boot] mounted amplifier and back) were used, the constant motion or low-level vibration of the moving car produced the same kind of voltage-creating effects in the stereo system's hook-up wiring, and it became audible through the system's speakers.  That's why XLO was asked to develop special anti-triboelectric wiring for car stereo and why many other manufacturers also offer it.

Other motion-related problems occur throughout our home stereo systems, especially when they're equipped to play vinyl records. There, some of the energy from the motion of the speakers in producing sound will be transmitted through the air - or even through the floor of the listening room -- to the turntable and (if it's in the groove) to the stylus of the phono cartridge, wiggling it to produce a signal which gets amplified by the system's electronics and sent out to the speakers again, to start the whole process over again. In extreme cases, we hear this as "acoustic feedback" - the sort of howl that's heard from a PA system when the microphone and speakers are too close together or the gain is set too high. In other cases, while it's still there to create distortion and false signal information and to limit our enjoyment of our music, it may be loud enough to be annoying, but not loud enough to actually be heard.

Something similar - the creation of voltages by wiggling things and then amplifying them as if they were a part of the regular music signal - can also happen in the system's electronics - particularly if they use vacuum tubes, some of which are known for being "microphonic" -- but even solid state gear can suffer similar problems, although usually to a lesser degree. Anywhere there's vibration, there's at least the possibility of a problem.

So what's the solution? Feet. 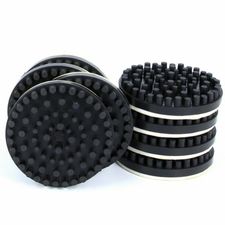 By now, we've all seen the near-infinite variety of special anti-vibration feet available to the audiophile community. Sometimes they're just feet; sometimes they're two or three part "systems" consisting of feet and things to rest them on, either for some claimed function, or just to protect the furniture, the floor, or the other components that that they're set on; and sometimes they're ― like the ones from Bright Star Audio, Rockport Technologies, or Machine Dynamica , ― more or less complex systems, combining a massy, or suspended, or damped, or any-combination-or-all-of-the-above, "isolation unit" plus feet of its own, that you're supposed to set other components or systems on to protect them or the rest of your system from vibration - either of their own or as generated by something else.

Whatever they are, of whatever number of pieces, whatever degree of complexity, or whatever level of expense (Some of the more elaborate anti-vibration systems have price tags in the thousands of dollars), all anti-vibration devices seem to work in one or the other of just two ways: Either they de-couple the product to be protected from its immediate environment so that vibration will, to the degree that they are effective, simply not get to it, or they do the exact opposite and, to whatever degree they are able, make the coupling "tighter" and MORE solid so that vibrational energy - either incoming or outgoing -- will be dissipated by spreading it among, and causing it to act upon, more mass. 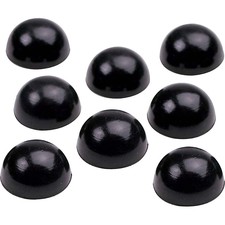 Putting this all most simply, there are "soft" feet that absorb vibrational energy and, in one way or another, convert it to heat (The Rockwell Technologies isolation base, which pneumatically creates contrary motion to cancel vibration, could possibly be considered a third kind of device, but seeing that its ultimate function is to decouple the protected product, I'm inclined to simply list it with the other "soft feet" devices) and there are "hard" feet - spikes or cones, for example (such as used to be almost "standard" for speakers), that lock the product to be protected to something else - the floor, a piece of furniture, or another product - and spread the vibrational energy over the entire coupled mass, not only reducing its effect, but possibly even lowering its effective frequency in the process.

Both of these approaches can and do work, and have been used successfully in audiophile systems for more than half a century. As a matter of fact, when I was a kid, at least that many years ago, my original Rek-O-Kut L34 turntable came with hollow and purposely "wiggly" rubber feet. As to which is better? Frankly, I don't know, although, if for no reason other than the greater stability they provide, I would still recommend spikes or cones - hard feet -- for speakers.

The one thing that I WOULDN'T recommend is any kind of foot or stacked arrangement that combines both hard and soft elements: Cones, for example, that are hard, but that come with discs to set them on (to protect the furniture or floor) that have soft rubber or plastic bottoms. What's the point of using the cones (or spikes or other hard feet) to better couple things to what they're set on if you're just going to DE-couple them with a soft layer somewhere along the way? Don't the two opposing approaches just cancel each other out?