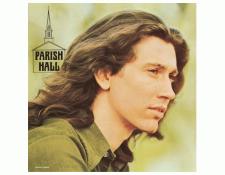 About five years ago I found a seemingly innocent (what I thought was a) folk album on Fantasy Records at an estate sale or flea market for a couple dollars by an artist called Parish Hall. I have that sort of curiosity and when I see something I've never come across before and its cheap, I give it a shot.  Half expecting to hear music akin to James Taylor or perhaps Van Morrison, when I put it on the eponymously titled album I was pretty shocked to hear a hard rocking power trio.  This was no folk rock record!

And, the music was solid, falling somewhere between The James Gang, CCR and at times The Jimi Hendrix Experience. It was good stuff and enough of a curio to become a "keeper" in my collection. Along the way I posted about it on social media and found out that it was something of a heavy collector's item. 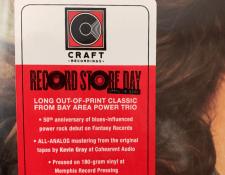 In fact, it  seems to have escalated in value in recent years, perhaps since some songs from this album have been used in TV shows (The Deuce), the Steve Jobs biopic film  (Jobs) and the Mafia3 video game.

Accordingly, Parish Hall is being reissued for Record Store Day later this week courtesy of Craft Recordings. With only 1500 copies being pressed and being sold in independent record stores -- thus, there are no online "buy" links in this review -- Parish Hall will no doubt be a "must score" album for vinyl junkies, crate diggers and DJ sampler types who have been looking for this lost blues rock gem out in the wilds of record collecting. 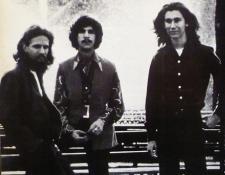 So far, my favorite tracks include the driving  "Dynaflow" which sounds like a template for Stevie Ray Vaughn. "Skid Row Runner" is a burner as is -- no pun intended -- "We're Gonna Burn Together."  "Take Me With You When You Go" wraps up the album with a clever rhythm section powered hook-groove that closes the album on a high note -- this could have been a hit for Janis Joplin.

I'm happy to report that this new reissue -- which has been cut from the original analog tapes by Kevin Gray at Cohearent Audio and pressed on 180-gram vinyl at Memphis Record Pressing -- sounds really great as hard rocking power trio recordings go. Lots of raw guitar and amp tones coming through here. 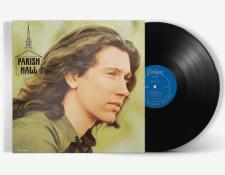 Comparing it to my original 1970 pressing it sounds at least as good as that if not better in many ways. There is  a somewhat bigger sense of dynamic range on the new one and the vinyl pressing is certainly better than my somewhat flimsy Fantasy Records original. The album is dead quiet and well centered, so there are no anomalies on that front to report about, thankfully.

The cover art is understandably -- likely -- taken from a clean original copy. While it doesn't look quite a sharp as my copy (which has luckily been preserved in its original shrink wrap), the new one still looks quite good and the colors are right.  The sleeve is manufactured from a thick cardboard stock that is heavier than the 1970 edition. 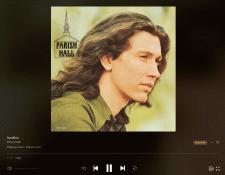 While we're discussing the cover, I would like to bring up one curious question:  I wonder what were the producers of Parish Hall thinking by wrapping up such a hard rocking album into a cover design that would be more suitable for the singer songwriters which were emerging at the time?

Parish Hall is about as far removed from the James Taylor-meets-Van-Morrison look of this cover as can be. This music is closer to Steppenwolf, Jimmy Page-era Yardbirds (ie. proto Zeppelin) and even Cream. 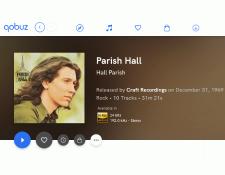 Parish Hall is also available digitally. The album can be streamed in high resolution 96 kHz, 24-bit MQA format on Tidal (click here) or 192 kHz, 24-bit Hi Res on Qobuz (click here). All of them sound good. The 192/24 version has a bit more high end air going on but I think I might like the 96/24 version a little better, oddly enough. You can also find it on HD Tracks in that resolution (click here) for those of you who like to download the music.

Whatever way you listen, if you like early 70s hard rock sounds, Parish Hall is worth checking out.