Yes's Relayer In 5.1: Clarity, Distortion, Delirium and Prog That Rocks

The first thing that surprised me about the new 5.1 surround-sound remix of Yes's 1974 progressive rock classic, Relayer, is that it retains a particular sonic footprint unique to this album, a texture I'd always assumed had something to do with compression for LP mastering. After all, Relayer is such a wild-ride of a recording, I perhaps wrongly just assumed -- especially as I grew to understand these things a bit, technically -- that a fair amount of compression would be necessary to keep the average teenager's record player back in the day from jumping out of the grooves. 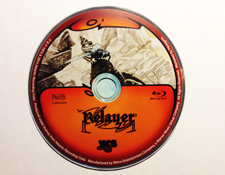 Humbled, I guess I was wrong because "that sound" is all over the new 2014 remixes by Steven Wilson and clearly part of the DNA of how original album producer Eddie Offord recorded Yes as they performed Relayer. I emphasize the word "perform" because one gets the distinct sense that there was some serious effort put into getting great takes of these ridiculously complex and wonderful jams. Particularly, considering the sound of bassist Chris Squire and drummer Alan White, both of whom are so tightly locked-in (featured in the the front channels predominantly), I suspect they likely played in the same room all together allowing for a fair amount of natural ambiance to occur between the players, capturing the sound of the studio along with them.

Some call that overlapping effect across channels / microphones "bleed" ... and I suspect it has a whole bunch to do with the overall sound of this album which in fact (according to the very detailed accompanying booklet) was recorded at Chris Squire's home studio.

With Steve Howe's ripping electric and pedal steel guitar overdubs and Patrick Moraz's classically near-maniacal, homerun-bound step-up-to-the-plate-in-the-wake-of-Wakeman synth'n'keyboard heroics, it is no wonder that the original stereo LP of Relayer was arguably one of the band's most challenging listens.

I mean that in a good way, in that you really had to study the record to comprehend all that was going on in there. This is the ultimate headphone album, in many ways. I can only imagine what a bear Relayer must have been to remix and reinvent. So kudos must be bestowed on prog rock meister-mixer Steven Wilson who helmed this reissue (as he has done with several other Yes releases as well as legendary titles by Jethro Tull, King Crimson, ELP and his own band, Porcupine Tree). 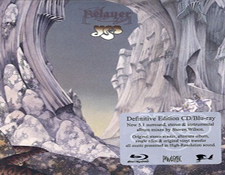 Now in this new surround mix you can hear all the details of Relayer in fascinating clarity. Yet you don't lose "that sound" that makes the album distinctive and different from any Yes album before or after. On the album opener "The Gates of Delirium," you hear the war unfold all around you, with fat synthesizer lines and mad electric guitar soloing enveloping every inch of your psyche. Avoiding the temptation of crazy ping-ponging things around the speakers (and there had to be that temptation when remixing this album), producer Wilson chooses his surround treatments wisely, punctuating the mix usually with Steve Howe's guitar, Moraz's synths and some room ambiance -- and of course, Jon Anderson's passionate, angelic vocals.

I won't spoil the surprises for you but at least a couple of times while listening to the 5.1 surround mix of "The Gates of Delirium" I laughed out loud, smiled widely, and shouted out aloud to no one but myself, "Yeaaaaaahhhhhhhhh!"

This sort of thrill ride continues on "Sound Chaser" and "To Be Over" (i.e., side two of the original LP). I'd go into more detail on those, but frankly, there is other stuff I have to cover here, so I'll just tease you with the assurance that it is a tasteful and fun mix.

Now, I know some of you will want to know if the 5.1 mix will replace the stereo mix as definitive. I have to say "no" for one reason and one reason only: There is a lot of fine-print detail in the booklet, and one of the points indicates that the battle sound effects heard in the middle of "The Gates of Delirium" were not on the master multitracks used to create the 5.1 mix. Thus, in preparing the 5.1, they concluded that those sounds must have been blended in on the final mixdown from another taped or LP source.

So, like the mono mix of the Beach Boys' Pet Sounds before it, the stereo original mix of Relayer will remain the definitive version. It is one of the many bonuses you get on the Blu-ray Disc, presented in a flat transfer of the entire album at 192 kHz / 24-bit resolution -- thus, there is no added compression since this wasn't being prepared for an LP.

So what else do you get on this nifty Blu-ray Disc beyond the 5.1 DTS-HD Master Audio Surround, in 96 kHz / 24-bit resolution, mixed from the original multichannel recordings? Well, for sure you get all the bonus tracks that were on the 2003 reissue/remasters (in higher resolution). But you also get:

There is so much stuff on this one disc! This disc is a wonder and a great gift for loyal fans.

Back to the sound quality, I have to reiterate my surprise of just how many elements of the sound that I thought were LP anomalies -- distortions, a certain sonic boxiness, etc. -- are actually part of the flavor of the recording. It's that warts'n'all grit that makes Relayer kind of unique in the Yes catalog, from Steve Howe's overdriven amplifier tones to Moraz's churning synths. These and other raw sounds on Relayer were captured in the inevitably imperfect confines of an early home studio, especially in contrast to the more pristine-sounding Close to the Edge (1972) and Going for the One (1977), both of which were recorded in professional studios.