Sometimes amidst the star making machinery of breaking a new talent, it is helpful for the ascendant artist to get a boost from an established major celebrity, a champion for the rising star's cause. Ultimately of course said rising star will have to fly on their own, without a net. For the aspirant, the celebrity support can be both a blessing and a curse if they don't step beyond that connection quickly. 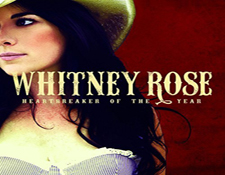 In the case of Whitney Rose, said celebrity support came from none other then the great Raul Malo of the Mavericks who discovered her while they were on tour in Canada (she was their opening act) and was impressed with her music and performances. In mid 2016, I received a then-still-fairly-new 2015 CD from Whitney, an album I liked very much called Heartbreaker of the Year.   I guess I am on the mailing list for all things related to the Mavericks now (for which I am thankful!), so it was a pleasant surprise to read in the liner notes that Mr. Malo not only produced the recording and plays on it, but also sings duet and harmony vocals with Whitney to great effect on several songs.  Recalling no less than that magic chemistry which k.d. lang found when she paired with the late great Roy Orbison back in the 1980s, their duet on a countrified arrangement of The Ronettes' "Be My Baby" is a spine tingler -- their two pristine voices complementing each other with a yearning I haven't heard in a pop music recording in a long, long time.

Still, as much as I liked that album, for some reason I didn't get around to reviewing it even though it has been sitting on my desk waiting for that moment of inspiration...  I've played the album for some friends and even for my brother, all of whom liked her sound and songs.

Yet I still didn't have that special hook to wrap the review around, an idea that would perhaps compel some of you, Dear Readers, stop, look and -- hopefully -- listen (to borrow an appropriate phrase from Country-Western legend Patsy Cline).

Well, dear readers, that moment you've all been waiting for has finally arrived! 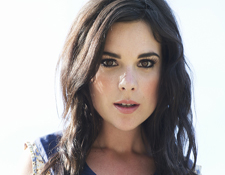 In all seriousness, what is prompting me to write this was the receipt in the mail of yet another new recording from Whitney Rose, celebrating her new home in Austin, Texas. The new EP - - it only has six songs on it - - is self-produced yet is no less grand than her last. In fact there are some songs on South Texas Suite which I like even better!

Its hard to keep a good song down...

One of those songs jumped out at me as something which many of you folks here reading Audiophilereview.com will appreciate as it is called: "Analog"!

So, here we have in these 21st Century digital, mobile, constantly-connected, internet-of-things, App-driven times, a plaintive Whitney singing a strolling countrified ode to the joys of analog across many aspects of our lives!  It really is impactful hearing this very organic flavored recording of a swingin' and a-swayin' country band playing while she's documenting the bits and bytes of modern living. The underlying message is of course that many of us would probably be better off with a little less digitalness inour lives -- or at least a little more balance, which is what I think she's getting at with the tune.  It's really quite clever and done in a way that is not feeling like a novelty song nor drenched nostalgia.

But it does make a point...

And there is a wee bit of of irony in the recording given that that this album was likely recorded in a digital medium (there are scenes in her promo video showing the Pro Tools-like workstation in the studio).  But hey, to be fair, the song -- written by another Austin based songwriter, Brennan Leigh of High Plains Jamboree -- does acknowledge the benefits of modern digital conveniences:

"Now I'm not down on it just because it's new

But in gaining a little, we've lost something too"

Some audio and videophile purists may swoon as Whitney croons the tune with just enough cow-punk sassitude: 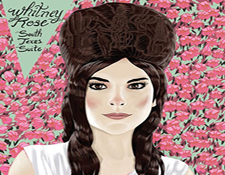 Audiophile punning aside, as modern digitally recorded CDs go, Whitney's two releases sound pretty nice. I have seen up on Amazon that South Texas Suite has been released on vinyl, so I'm hoping to get my hands on a copy of that (and if there are any significant updates I'll be sure to add them in to the comments section below at the end of this review).

Another standout on this nice little EP showcases the fact that Whitney is a very good songwriter in her own right in the classic Brill Building sense.  The opening track, "Three Minute Love Affair," is a wonderful song replete with verses, choruses, bridges and hooks that could have been recorded back in the day by the likes of Lynn Anderson, Loretta Lynn or Kitty Wells.

This is fun stuff. If you are missing the essence of young Linda Ronstadt singing country-fried pop songs or long for the days when k.d. lang was a Country-Western rising star, Whitney Rose might just be the southbound ticket to ride for you.