Most everybody I know loves what they tend to call "the Peanuts music" in the movies and TV specials for Charles Schultz's beloved Charlie Brown character. What I'm always amazed at is how few people really know who was behind that music on those programs:  jazz legend Vince Guaraldi. Coming out of Cal Tjader's innovative latin-based jazz groups in the 1950s, Guaraldi later won a Grammy for his now classic tune "Cast Your Fate To The Wind" (1963) which became a hit apparently when DJs started flipping over a 45-rpm single to discover the infectious mesmerizing B side. In due time the producers of the Charlie Brown programs connected with Guaraldi and -- as they say -- the rest is history (which you can read about by clicking here for the wiki and here for an interesting recount by Schultz' wife). 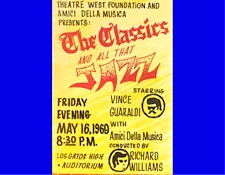 After a hearty (if financially disastrous) run on Fantasy Records (the iconic and controversial San Francisco Bay Area label behind early Dave Brubeck, Cal Tjader, Creedence Clearwater Revival and many others)  Guaraldi jumped to Warner Bros. Records for his last three albums. These often overlooked gems - -which are not always easy to find - - have thankfully been re-issued on a handy to CD compilation from the good folks at Omnivore Recordings.

I say it is "handy" because if ever there was optimal jazz music for a good road trip, Vince  Guaraldi's is it. So Vince Guaraldi: The Complete Warner Bros.-Seven Arts Recordings is a welcome and even important digital release for fans of the man's music.

The new CDs actually sound really quite great and surprisingly full bodied, an accurate snapshot of the original LP sounds and then some. According to the liner notes, the album was remastered from 96 kHz, 24-bit transfers and engineer Michael Graves improved them by eliminating an electrical "ground hum" which plagued the Oh Good Grief! album tapes in particular. Learning of this, it sure would be nice if Omnivore put out these recordings on a high resolution platform like Pure Audio Blu-ray Disc in full 96/24 fidelity where the entire two CD set would probably fit on a single disc.  (Just sayin'....  hint hint) 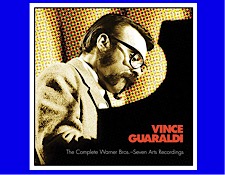 Perhaps best of all on Vince Guaraldi: The Complete Warner Bros.-Seven Arts Recordings however is that you get four previously unreleased bonus tracks on this collection which are a bunch of fun!  Mostly covers. You get to hear interpretations of then popular songs reinvented as only he can. My favorites include the obvious ear candy of "Do You Know The Way To San Jose?"

Another fave -- both the outtake and the original from his second album -- is his interpretation of Sonny and Cher's "The Beat Goes On," which removes any reliance on Carole Kaye's signature bass riff and brings that tune into the wide open spaces of jazz improvisation.  It sort of twists the tine into the vibe of Horace Silver's popular "Song For My Father" and possibly, just possibly, provides a missing link to Steely Dan's 1974 hit "Rikki Don't Lose That Number" (which drives off a similar groove).  This version of "The Beat Goes On" is also interesting if you've watched The Wrecking Crew documentary as there you learned that Carol Kaye wrote that riff to bring life to the song which was falling flat as Sonny Bono had originally written it.  So hearing it without the riff is a curious twist. 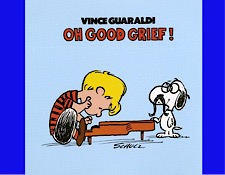 The other albums here on Vince Guaraldi: The Complete Warner Bros.-Seven Arts Recordings are really fun and often fascinating. The first album, called Oh Good Grief!  reinterprets his Peanuts compositions with often more upbeat tempo arrangements and new instrumentation not found on the original recordings (electric guitar, harpsichord, etc.). The result makes this music even more apropos for the mod a-go-go swinging second half of the 1960s.

While you can find Oh Good Grief! and Guaraldi's swan song album Alma-ville streaming up on Tidal in CD quality, at least for now, however you'll have to get a copy of Vince Guaraldi: The Complete Warner Bros.-Seven Arts Recordings in order to hear Vince's second Warmer album The Eclectic Vince Guaraldi. On this record he even sings (quite compellingly in a proto-Tom-Waits sort of manner I think, contrary to the opinion of the liner notes author who is not fond of those choices). Here he interprets Tim Hardin's wistful "Black Sheep Boy" and "Reason To Believe" (which later became a hit for Rod Stewart). This album offers an expansive musical palette including, notably, a string section. 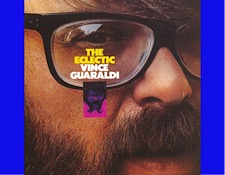 Vince Guaraldi: The Complete Warner Bros.-Seven Arts Recordings is a fine reissue and one you should not hesitate to pick up (at Omnivore Records and here at Amazon) not only for the music but also interesting liner notes and the booklet which includes photography of Vince as well as reproductions of flyers and advertisements for his concerts around the San Francisco Bay area. Actually, my mind boggles a bit when I see that Guaraldi -- a Grammy winning composer -- was playing such small towns like Los Gatos outside of San Jose.... This is a talent that should've been on larger concert stages for sure. The liner notes in the booklet explain some of the reason for his struggles.

Sadly, he didn't record much after these albums and in 1976 passed away unexpectedly, tragically, at the way too young age of 47.

Thankfully he left behind a tremendous body of work all of which is worthy of your exploration (I have almost all of his records). if you're not familiar with his Fantasy era releases you can stream many of the albums on Tidal. Be sure to at least listen to his breakthrough album Jazz Impressions of Black Orpheus which contains his Grammy winning hit "Cast Your Fate To The Wind"

Please support AudiophileReview.com’s free content model by purchasing your AV gear, music (or other stuff) via Amazon.com. We get a few bucks here and there, which helps us create more and more top-level reviews and content for you to enjoy!