I am really glad I waited until I located a copy of the Blu-ray Disc version of Tom Petty and The Heartbreakers' new album Hypnotic Eye, as opposed to grabbing a cheap download or a CD copy. My expectations for this album were set pretty high after their Mojo album in 2010 -- and its accompanying stellar 5.1 surround mix, as heard only on the Blu-ray Disc version of the album. It was -- and still is -- a joy to experience. 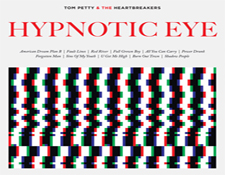 That album was something of a watershed for Petty and his cohorts, especially guitarist Mike Campbell, as the whole project was reportedly built around his then newly acquired vintage 1950s Les Paul guitar. So the record has a sound teaming with layers of rich, glorious, overdriven and distorted guitar sounds, with huge tube amp tones out the wazoo (as they say, if you will). And the song writing complemented this sonic blueprint. From the opening "Jefferson Jericho Blues" on through to the Beatles-meets-Zeppelin flavored closer, the spectacular "Good Enough," Mojo is easily my favorite Tom Petty album since Wildflowers (1994)

Mojo is a rich recording that took Petty's sound into some grand new spaces and set the stage (to my ear) for a more mature sounding Petty. I mean, think about it: many of the legendary blues artists of the past put out valid career statements until their dying days, so why shouldn't today's rock 'n roll pop stars? With some strategic turns of the musical card, artists from Bob Dylan to Barbara Streisand have been able to sustain long and fruitful careers this side of Duke Ellington (who recorded for more than 50 years) and Frank Sinatra (who kept touring into his late 70s). Thus, Mojo was a brilliant masterstroke for Petty.

And now here we are in 2014 with a new Tom Petty & The Heartbreaks album, Hypnotic Eye, and I was almost disappointed. Why? Because the first thing I did when I played it was to listen in regular stereo. It sounded good, don't get me wrong. Its just that it sounded like another Tom Petty album.

There in lay the rub as my expectations took a slight nosedive. Gone, I feared was that huge sound I loved so much on Mojo... the resonance that had so knocked me out.

Fortunately, I caught myself by the fingertips, dangling from the precipice of expectation -- did I really just write that? -- and remembered to save judgement until I heard the surround mix.

I glad my inner self had that little talk with itself because the 5.1 mix of Hypnotic Eye is a knock-out that really showcases the music well.

The surround mix presents this new music in a manner that even people who don't really like surround sound will appreciate, capturing the very natural sound of a killer rock band playing in a studio. That it happens to be a recording by one of great rock bands of our times -- playing in a warehouse that Petty has converted into a studio (i.e.. The Clubhouse) -- is a bonus.

So, you may be wondering, what is the big difference in the surround mix? Well, in this surround mix you are hearing and feeling the whole band (seemingly) playing in the room together. I don't know if they really were. but it sure feels that way! It is very much a mix based on a stereo image, yet one which reaches out into the room and envelopes you with the feel of the music. As much as I might personally like it, you are not going to hear all sorts of prog-rock ping-pong cleverness popping up in the surrounds and swirling around you in this mix. On Hypnotic Eye you can listen to this mix pretty much anywhere in the room and its going to sound great -- you don't have be in the sweet spot. That's something of a big deal for this kind of music, especially when you want to play it for groups of friends or during a party.