I hope that fans of The Posies will appreciate my review here but this really isn't written for them. Why? Well, Posies fans are a pretty rabid bunch, so by now I'm sure they all know that Omnivore Recordings has -- in tandem with the band, as part of a PledgeMusic campaign -- reissued the Seattle band's 1990 sophomore ascension called Dear 23. All of the Posies fans I know have already purchased this fine new deluxe edition two CD set.  But ... y'know folks... there are a whole lot of other people out there in the land of audiophiles who may well be interested in The Posies and who may well have no idea what the group sounds like. So, for those of you out there who have no clue about The Posies are, this one is for you! 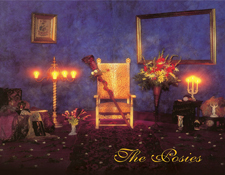 The Posies were founded and are fronted by Jon Auer and Ken Stringfellow, a duo with fine musical chops and a vocal harmony blend that works in that magical manner this side of The Everly Brothers,  The Beach Boys, The Beatles, Big Star and Badfinger. Historically, many folks have lumped The Posies into the "power pop" genre but they are way more than that. The Posies are a great hard rocking band first and foremost. They are fine tunesmiths of songs with riffs, choruses, verses and bridges.  Add that all up and you have a recipe for some wonderful music that is thankfully standing the test of time.

After getting some buzz going with a self released cassette, the band soon found themselves in 1990 with a contract to David Geffen's DGC label and opening slots touring with Red Kross and The Replacements. By 1993 they were touring Europe, getting better everyday... but that is another story I'll save for the next reissues (Frosting on the Beater and Amazing Disgrace are coming soon in deluxe edition packages). 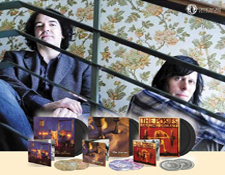 But here lets focus on the joy that is Dear 23. I'll say it up front, that this is one of those records which grows on you with each listen. And I'm not entirely sure why, but I'm enjoying the album much more on this new CD than on my original copy. Could it be that I was recently fairly blown away when I saw the classic line up of the band playing much of this material live recently (they were tremendous!)?  Could it be the new remastering somehow sounds better to my inner ear? I'm not sure? It sounds louder and clearer at points, a bit fuller perhaps. Who knows?

Whatever the reason, I know that I'm connecting with Dear 23 more than ever this round (it'd admittedly been a while since I'd played it before, probably around the time of the Blood Candy album, when I first finally saw them perform live).  As modern rock records from the late 80s and early 90s go, this album sounds real good, big and bright yet full bodied. Big electric guitars chime side-by-side strumming acoustics and enormous drums. Dear 23 was created with now-legendary producer John Leckie (Magazine, The Dukes of Stratosphear, The Stone Roses, Radiohead, etc.) so you know this album has some solid roots. Sounding really quite wonderful and mastered off the original tapes, the new Dear 23 does sound better than the original 1990 DGC version. The new edition includes a bonus disc of mostly previously unreleased tracks including many fascinating demos giving insights into the band's production and composing process. 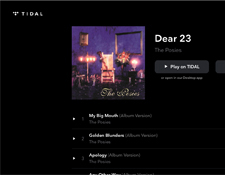 My favorite songs on Dear 23 include the one-two-punch of the Monkeemobile-drag-race-down-Hollywood-Boulevard album opener "My Big Mouth" paired back-to-back with the instant-earworm of "Golden Blunders." I've grown to love the album closer "Flood of Sunshine" because it is an unexpected throwback to the epic anthems of the late 60s and early 70s (think Donovan's "Atlantis" by way of Led Zeppelin's "Thank You."). It is not exactly what you'd expect to hear from a group crooning beautiful multi-part harmonies and rich melodies over the wild surf of 90s modern-rock; I give them props for adding a massive guitar solo on that song at a time when guitar heroics were still frowned upon in many indie rock circles. I've always liked the bite of the all acoustic "You Avoid Parties" and after Jon and Ken performed it unplugged (off mike!) at the show I saw, I was even more taken with it (its sort of like if The Everly Brothers were channeling early Joni Mitchell). "Apology" is another stand out gem and here on this set we learn how the collaboration composition came together (you'll hear Ken Stringfellow's earlier version demo which was very different, particularly in its verse structure)

I'm still working my way through all the demos and bonus tracks but rest assured there are many special joys there. The demos for Dear 23 tacked on to the second half of the first disc after the original album are pretty amazing in their own right because there you hear a young band armed with songs fully formed and band playing quite assuredly even before they got to a big proper studio. 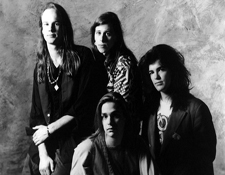 You'll want to get the CD to hear all of these bonus tracks as they are only available on that set. Over on Tidal, there is basic version of the album streaming in CD quality (click here for that link to it). And, if you want Dear 23 on vinyl, well that is "just" the basic album (no bonus tracks or download) but it is spinning at 45 RPM spread over two LPs (to "give it room to breathe across two glorious slabs of wax", per Omnivore's site) so it is bound to sound terrific (I hope to get my hands on a copy sometime soon). The album is also available at Amazon (click here for that) and other retailers which have the good musical taste to carry The Posies' music.

There are many options for exploring The Posies' music. Dear 23 is a great place to begin the journey.