After two noble but ultimately unsatisfying releases in the 80s, I didn't have high expectations for a new Monkees album in 2016, especially with one of the group's lead vocalists, Davy Jones, now deceased. 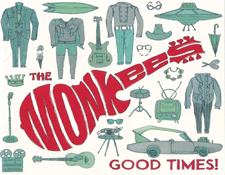 But then I started hearing industry rumblings of new songs being written for The Monkees by the likes of XTC's Andy Partridge... so my ears perked up a whole bunch...

Some of you might know, I'm a massive XTC fan.

By the time we got the pre-release teasers of songs written by the likes of Weezer's Rivers Cuomo I knew this new Monkees album was probably going to be at least a very good listening experience.

That Good Times has turned out to be a genuinely fun -- and at times even great and uplifting -- Summer-sunshine album is an unexpected joy.

How does Good Times sound? Real nice! The music on the CD is full bodied and modern yet still it plays like a Monkees recording. The producers are not trying to make this sound "current," yet it doesn't sound out of date. There is no auto tune. There are no samples (as far as I know) being used. You can turn it up pretty loud and your ears won't hurt (mine didn't!)

Mostly Good Times contains fine new pop and rock recordings, replete with jangly electric and strummy acoustic guitars, warm natural sounding drums, round Fender-sounding bass, and an occasional Farfisa sound or and even a Mellotron. As far as I can tell there are for the most part no "modern" instruments used on it, just modern recording techniques  -- I am guessing this was done digitally, enabling guest appearances recorded at several studios across the country. 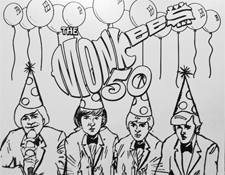 Consider the made-in-the-studio title track duet between Micky Dolenz and singer/songwriter Harry Nilsson -- they used Harry's guide vocal on his original demo take for an unfinished song he wrote for the band. According to Rhino Records website it was recorded initially at a session with Mike Nesmith in January 1968, but the production was left unfinished. The new final version sounds very natural and Mickey's voice sounds pretty remarkable given he's singing it in his golden years with a 20-something Nilsson preserved in a magnetic tape time capsule.

Anyhow, I could blather on about these nuances but I'd rather just babble on a bit on the songs that I like the most so far...

Andy Partridge's song "You Bring The Summer" was my initial fave -- obviously as the XTC fanboy that I am -- because it connects some dots in a dream project that he never quite got off the ground: a bubblegum album! When I was a little kid exploring music beyond The Beatles, Bubblegum pop music was my initial jam and I still a soft spot in my heart for it.

Don't dismiss it either folks as its stuff that influenced the sound of bands like Talking Heads, The Cars and so many others (including XTC). So this new Monkees version sounds like if The Monkees were recording for Buddha Records -- the label behind the core of Bubblegum back in the day -- in 1968 or so, with a nod to The Beach Boys along the way.

"You Bring The Summer" is a super catchy song, super sugary sweet and super fun. Its one of those songs that makes you smile.

I also really like the Rivers Cuomo song "She Makes Me Laugh" with its Monkees-meet-the-Beatles flavored chorus a whole bunch. The others are growing on me, no doubt. 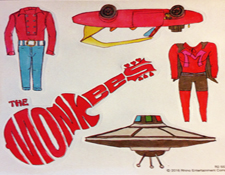 One of the surprise stand outs is Mike Nesmiths' "I Know What I Know," a love song that has a lovely, somewhat epic Brian Wilson flavored build up (like some lost SMiLE track).  Peter Tork's "Little Girl' is really interesting with its curious time changes and chords; it reminds me of a very different band curiously enough, loosely echoing Phil Lesh's compositional flavor on The Grateful Dead's Mars Hotel album (really!).  Noel Gallagher and Paul Weller's "Birth of an Accidental Hipster" brings the boys into late 60s territory again with a track that might have fit on the Head soundtrack (a much more driving trip ala "Porpoise Song," if you will).

Speaking of Carol King / Gerry Goffin songs (they wrote the aforementioned "Porpoise Song," in case you didn't know that) Peter's vocal on their "Wasn't Born To Follow" is fantastic. Its really incredible how a track recorded with legendary Wrecking Crew members such as Earl Palmer (drums), Al Casey and Mike Deasy (guitar) and Max Bennett (bass) can sound fit in so right alongside all these other songs recorded in another century.