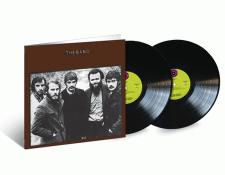 The curious thing for me about the fine new Bob Clearmountain-made Stereo remix of The Band's legendary second album from 1969 is that beyond the fact that I like it just fine, I seem to like it more on the Blu-ray disc than the vinyl.

Now some of you know that I recently reviewed the fascinating 5.1 surround sound remix of the album included with The Band 50th Anniversary Super Deluxe Box Set. In case you missed it please click here and you'll jump to that review which has quite a bit of perspective background on the album and its significance in music history (this was arguably a game changer of a record!). 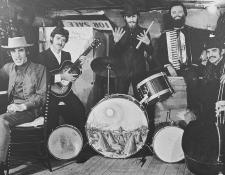 This new Stereo remix maintains the intimate clubhouse feel that is so beloved about this recording, yet  there are many details which are now punching out a lot more clearly. For example -- and this is in general across the whole album -- Levon Helms' drum set sounds remarkably more present, especially the Kick Drum, Tom Toms and Cymbal hits.

Helms was a very expressive drummer, often employing unusual rhythmic patterns, so it's quite excting to hear his finesse coming through much more audibly.

Now, Dear Purist Readers, please don't start worrying that this is going to be a Drum-heavy mix because everything else is in balance -- this still sounds like The Band album you know and love. It is just that "everything" feels a little more open. 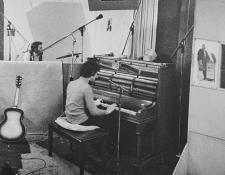 That may be at least partially due to the limitations of the technology of the times as well as necessary compression applied to the original album mastering and the original recording to make it radio ready.

So all that is fine and good.

The 45 RPM presentation of The Band 50th Anniversary Super Deluxe Box Set is generally quite grand so I really don't have any complaints. The dark black vinyl is quiet and well centered. But, I don't know why but for some reason I guess I'm liking the convenience of hearing the whole album all in high resolution on Blu-ray Disc. Go figure. 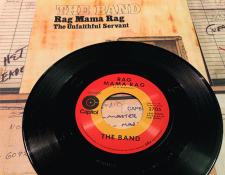 Even with the wider groove spaces given to the three-per-side track layout, "Whispering Pines" somehow sounds a bit more focused on the Blu-ray Disc to my ears. I guess this is further proof that I'm not a vinyl-only/digital-be-damned purist, folks (despite my love of records!).

Every listening experience is indeed unique!

The outtakes and bonus tracks that you hear on the CDs in The Band 50th Anniversary Super Deluxe Box Set are also excellent both in content and fidelity. If you already have the 2000-era remastered / expanded CD, those bonus tracks seem to be the same as the ones tucked on the end of the CD of the Woodstock performance. 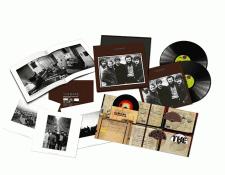 The new bonus tracks for the collection can be found on end of the CD version of the album and on the Blu-ray Disc (in 5.1 Surround Sound and new Stereo!). The "A-Cappella / Stripped Down" mix of "Rockin' Chair" remains my favorite of the outtakes but others are no doubt interesting. I especially like the "earlier version" and instrumental mix of "Up On Cripple Creek."

The live concert CD from Woodstock is indeed a fantastic performance and something of a centerpiece in many ways. My only gripe about the set is that I wish they had included that material on the Blu-ray disc in high-resolution as well because it is indeed so wonderful.

Does video of The Band at Woodstock exist? A quick peek at YouTube indeed reveals that their performance was filmed -- so that too would have been great in this boxed set on the Blu-ray. 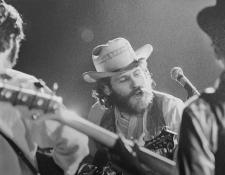 Upon listening to their Woodstock set, one of the big "ah ha!" revelations I had centerd around an otherwise unreleased song they do called "Ain't No More Cane On The Brazos."

You can hear this song on Tidal (click here). But... be sure to compare it the hysterical drunken version (click here) -- with The Band's Rick Danko, The Grateful Dead's Jerry Garcia and Janis Joplin -- filmed about a year later on the Festival Express Tour across Canada!  It is this version where I first heard this song and its presence on that post-Woodstock concert tour video makes a whole lot more sense now hearing that they played it at Woodstock!  As far as I know, this song has not made it onto other albums by The Band, studio or live. 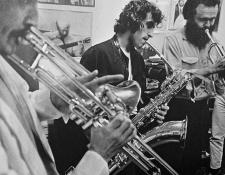 The Woodstock performance is quite amazing given that the likely scenario on stage was that the band probably couldn't hear what they were doing very well. Their harmonies are fantastic the band's playing is spot on. Click on the titles following to jump to video clips of "The Weight" and "Tears of Rage."

The packaging for The Band 50th Anniversary Super Deluxe Box Set is indeed quite deluxe including a nice booklet containing new essays and behind-the-scenes photography. The set also includes three album-sized reproductions of key photos by original photographer Elliott Landy who helped shape the group's image back in the day. 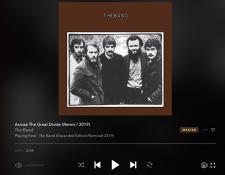 It all comes housed in a sturdy, linen-finish chocolate brown box that reproduces the original album cover art -- a loving tribute to this grand moment in popular music.

If you only want to hear the music from The Band 50th Anniversary Super Deluxe Box Set, you can listen to it streaming in CD quality on Tidal (click here). The remixed Stereo version is also streaming on Tidal in MQA format with the bonus tracks (mirroring that of the disc in the boxed set, click here for that)  You can find the original mix up there on Tidal and on Qobuz it is up there in several versions including 192 kHz, 24-bit (click here for that version). 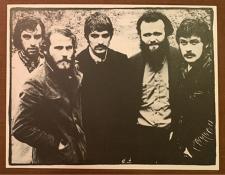 There are so many different ways to listen to The Band's second album, for sure!

Universal needs to be applauded for doing a wonderful job on a lovely tribute to this legendary band. Now, I'm reinvigorated to get my hands on the deluxe box set for the live album from the Academy of Music that was done several years ago because it has a Surround sound mix in it that I would really love to hear... One of these days...