Anniversary music collections celebrating legendary artists of the past are useful in these 21st Century, digitized, too-much-of-everything-at-our-fingertips times as they can call our attention to significant contributions, accomplishments which we may have overlooked (or simply never knew about!). 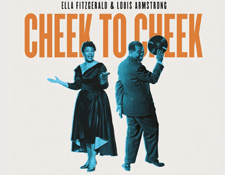 Vocal legend Ella Fitzgerald would have turned 100 years old last year so the good folks at Universal Music Group have been breaking out some gems for us to reconsider anew. Particularly in the 1950s, Ella and one of the founding fathers of Jazz, Louis Armstrong (aka "Satchmo," aka "Pops"), began a series of duet recordings that became enormously popular, resulting in a multi-album run which underscored the duo's dynamic chemistry. Such was the respect and musical love between these two, the synergy between their voices is quite remarkable. Ella's bell-like precision complements perfectly Louis' world-weary grit.

A Yin-Yang pop jazz duo for the ages, their music together has been compiled in a new four compact disc collection called Cheek To Cheek.

Ella and Louis had met years ago when her career was just beginning -- according to the liner notes in Cheek to Cheek it was Pops' recommendation that got her signed to influential big band leader Chick Webb in the 1930s which kickstarted her career.  So by the time of these recordings twenty years later, they were old friends and their connection palpable. You can hear it in their vocal interaction, two artists at the top of their game playing off of one another like Brother and Sister. 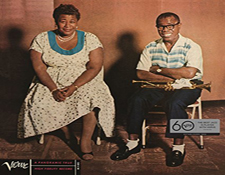 In recent years I have opened Pandora's box by diving deeply into Louis Armstrong's music (side note: this is something I did many years earlier with Duke Ellington, a daunting task given he was recording for much of his time on earth and frighteningly prolific.... I probably have more than a hundred of Duke's CDs and LPs and I still don't have everything!  Thus the Pandora's Box analogy which applies to Pops' catalog...).  Likewise, I have listened to many Ella records over the years but these sessions with Pops are among the finest  of hers that I've heard, with a sense of relaxation and ease that sometimes was lost on other sessions she did (I've also heard Ella kick back on her recordings with Duke Ellington).

This was never more clear on Ella & Louis' version of Porgy & Bess which is simply a brilliant, big and beautiful production. This, for me, is a highlight of the Cheek to Cheek collection. 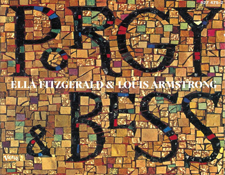 I know already just from hearing Porgy and Bess on this 44.1 kHz, 16-bit CD and via Tidal that I absolutely must get the whole album on vinyl or some other higher resolution format because the production is wonderful and the performances stellar. This is one of those albums I've seen around for ages and always wondered about it, but never took the plunge. My bad. This is simply a gorgeous and powerful recording! Lush orchestrations, wonderful interpretations and Pops' trumpet blowing pure and sweet.

And to you hep cats out there who might poo poo this: there are points on this version of Porgy and Bess where the music gets downright surreal and some of the vocal pieces sound like blueprints for Tom Waits' groundbreaking albums like Franks Wild Years and Swordfishtrombones. All this stuff is tied together, kids... you just have to find the dots to connect them...  Indeed, 70 years hence, there is still interest in these recordings and thus Universal Music should be applauded for creating this very handy and affordably priced compilation of Ella & Louis' complete duet recordings. 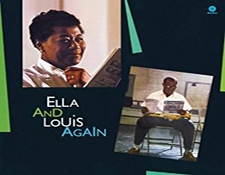 Cheek To Cheek begins with their initial singles for the Decca Records label and then continues with three albums cut for the Verve Records label (produced by the great Norman Granz!) in the late 1950s -- Ella and Louis, Ella and Louis Again and Porgy & Bess. You get all three albums, all those singles and a slew of bonus tracks, copious liner notes and photos all for the very fair price of about $40 (that is about ten bucks a disc for four CDs).

Sonics wise the CDs sound quite good all things considered.  If you have a Tidal streaming music service subscription you can hear the first two Ella and Louis albums in "master" quality using the MQA codec -- those sound better than the CD quality streams of those albums which are also on Tidal. 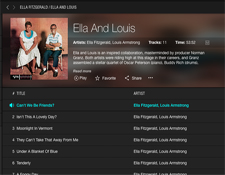 Curiously, when I cherry picked tracks to compare-contrast with the new CD, the new CD sounded a bit warmer to my ear than the Tidal version. For example, "I Won't Dance" sounds brighter, and seems to have more sibilance while the CD version sounds a bit more natural (I know, that is an odd thing for me to be saying, but there it is kids). Different mastering on these editions most likely. I also have to add the caveat / disclaimer that it is admittedly really hard for me to make any sort of hard judgement call at this stage as I've never heard these recordings on LP, a download or other high res format. It's a matter of what you like ultimately. And Cheek To Cheek is ultimately all about the music so this four CD collection is a great place to start exploring Ella and Louis' music.

A quick search on Amazon and you'll see that there are many different versions of this music out there coming from sources all over the world, so its hard to tell which is definitive -- I'm not even sure if this new set is exactly that!  But... y'know...  if you know you like both artists and have liked some of the music you've heard along the way, getting this affordably priced set will be a great way to immerse yourself in their music. If you want to spend more, there are 96 kHz, 24-bit versions of Ella and Louis and Ella and Louis Again up on HDTracks (but I have not heard those so I can't attest to how they sound). I know I'll be keeping my eye out for some clean original vinyl pressings soon to hear how these recordings sounded back in the day -- back to the future, indeed.

Any way you get it, you really can't go wrong; Ella Fitzgerald and Louis Armstrong together are essential listening.