Some audiophiles really loathe colored vinyl discs but I'm not one of the haters. I actually really like them simply because they are fun and can add another dimension to the joy of listening to a record. The challenges of course are that some pressings if done sloppily can have issues with additional noise. I have read various and sundry reasons for this and that is not a path I'm going to go down in this article -- feel free to comment below and add your $0.02 on this issue. All I know is that some of my favorite albums of older and recent vintage are on colored vinyl, from a 200-gram copy of of Miles Davis' Kind Of Blue on perfectly pressed thick milky blue vinyl to a green splatter reissue of The Kink's Village Green Preservation Society on the Pye Records label to some early albums on Fantasy Records by Vince Guaraldi.

That said, here are some fun colored vinyl finds I got on Record Store Day this year: 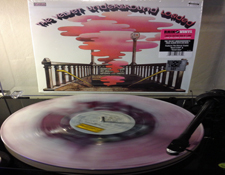 The 180-gram purple splatter vinyl pressing of The Velvet Underground's fourth album, Loaded, was an unexpected joy. I needed a new copy of this album as my old pressing (a punched hole promo) was showing its age and all I had were the CD reissues (Peel Slowly and See box set version as well as the Fully Loaded two CD edition, both issued by Rhino). While I've read some complaints of noise and sibilance from fans on forums about this reissue, my copy is really nice and quiet and has a gorgeous pattern. I got lucky! This was never the best sounding of the Velvets albums and even my original pressing has a certain amount of edginess to the high end, but until we get a full remix this copy will serve me just fine. 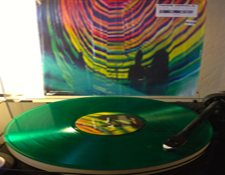 Tame Impalas's weakly titled Live Versions release is probably my biggest disappointment this Record Store Day. Yeah, the sound is pretty decent and the performances sound pretty solid but there is something underwhelming about this as a live album. Don't get me wrong, it sounds pretty good for what was probably recorded on a laptop (not a bad thing necessarily, mind you!) at one of their concerts. The vinyl is quiet and while not perfectly well centered, that doesn't seem to impact the music negatively. No, its just that there is a certain something missing from this recording, an energy or an edge, that was more present when I saw them live in San Francisco. Perhaps it is the lack of any real guitar solos too and the reliance on nifty sonics which get lost in a two-channel mode here -- perhaps Tame Impala would benefit from a surround sound mix of one of their concerts. I don't know. I just know I have been somewhat underwhelmed by this release especially given the back cover photo showing off the band's multitude of spiffy effects pedals. I expected more. Go figure. Don't worry, I'm not giving up on this band just from this release. 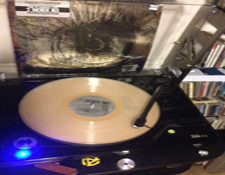 Perhaps I'm underwhelmed due to more thoughtful releases from the likes of The Flaming Lips who treated us on Record Store Day to a nifty 50-minute distillation of their 24-hour song called 7 Skies H3. I've only given this album a couple spins thus far, but that is way more time than I was able to give the 24-hour song when it was released in 2011 on the Internet. The package The Flaming Lips put together for 7 Skies H3 is lovely, with a shiny silver foil cover and inner sleeve  and pressed on sweet clear (it doesn't say but I'll assume it is 180-gram) opaque vinyl. This isn't "easy" Flaming Lips so you pretty much need to be a fairly hardcore fan to want to explore this sort of indulgence But that is part of the fun of The Flaming Lips -- I've been enjoying their journey of re-invention and re-discovery the past several years and am viewing this release as part of that continuum. That said, this new album helps us find the songs within the song (if you will) and there are some compelling melodies tucked away in there. I liked the title track and the very Pink Floyd-y tracks like "In A Dream" right off the bat. There are some aggressive explorations on this album such as "Riot in My Brain," which sounds inspired by the grooves that Frank Zappa created on the second disc to his 1966 masterwork debut, Freak Out ("Help I'm A Rock," "Return of the Son of Monster Magnet").

This isn't a throwaway of mindless noodling in attempts to set a new record for song length. Something genuine and creative is going on here.

This all gets me thinking.... can you imagine if the Lips did put out the entire 24 hour song on a colored vinyl box set? I for one would not be in the least bit surprised. If they do that, I just hope they put them out on a rainbow of cool looking great sounding multi-colored vinyl discs.  Imagine: a 24-hour Flaming Lips listening party marathon for one song across 24 discs .... the mind boggles at the the thought... in a good way.