In 2011 Pete Townshend and The Who put out a special "Director's Cut" box set commemorating their landmark 1973 album Quadrophenia. This was a beautiful package, lovingly created replete with remastered CDs and two discs of demos. Most notably, the set included the first bits of the by-then-somewhat-legendary 5.1 surround sound mixes of the album in unfinished form. Only eight of the tracks were offered then and those were interesting but they did, ultimately, sound somewhat unfinished. 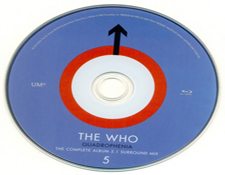 Fast forward onto the heels the commemorative tour celebrating the 40th Anniversary of Quadrophenia's release and here we are three years later with yet another deluxe box set and the finished 5.1 mix. Got that? You get the live concert from London (on Blu-ray or DVD and CD) plus a bonus disc with the FINISHED complete Quadrophenia audio album in 5.1 surround sound. This bonus disc includes a new stereo mix and -- for the first time in the high resolution digital realm -- the original 1973 mix!

Fortunately, for those of us who have the mighty fine "Directors Cut" set or who don't want to spend an additional $100+ on that new deluxe set, there is also a much more affordable standalone version of the studio album available as part of the Pure Audio high resolution audio-only series of Blu-ray Disc releases. Yes, that is right: audio only on a Blu-ray Disc, no video -- they use the expanded space on the disc to deliver super high resolution, uncompressed audio which gets you, Dear Readers, that much closer to the master tapes.

So, I'll get right into the review part at this point since most of you reading this probably (a) know about Quadrophenia and have the original album on LP or CD and (b) don't need my analysis of what the story line is about and such. I leave that for other websites and magazines around the Interwebs...

You probably want to know how it sounds and whether I like it, right? 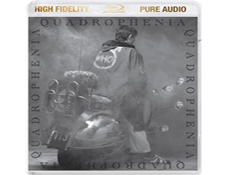 There are lots of dynamics on this full fidelity 24-bit / 96 kHz Blu-ray release. The mixes are by Bob Pridden and Richard Whittaker and they do a good job of capturing the essence of the album while carefully bringing the music out into the three dimensional space of your home theater listening area. They, perhaps wisely, decided to keep the core of the band's sound very much a front and center affair, so the surrounds are mostly used for textural portions such as synthesizers, overdubbed guitars, special effects, nature sounds (the sea especially) and such.

Stylistically, the new mixes are good and ultimately very respectful of the original, while of course bringing Roger Daltry's often amazing lead vocals up higher (as per the 1996 remixes). While the producers tried to get things as close as possible, there are inevitable little detail differences. For example at the end of "The Real Me," the echo timing applied to Daltry's final outburst ("Can you see the real me me me me me...") is a little different than the original. So, at first listen -- for those of us intimate with the original mix -- details like that can be a bit unsettling, depending on how passionate the listener is about this sort of thing. Once I acknowledged that this new mix is different thing (and that we always have the original stereo mix to listen to if we prefer that), I became completely accepting of the variations.

The surround mix works very effectively on quieter tracks like "Helpless Dancer" which rotates Roger Daltry's conversational vocal lines in time around room before ending up front and center In other songs such as "5:15," the horn sections appear from the rear while the band rocks out in front of you.