I let out a big chuckle when I came across a used copy of the second album by The Velvet Underground on the new Pure Audio disc format a couple weeks ago at Amoeba Records. Not that the album -- White Light/White Heat -- shouldn't be on the format or that the album isn't legendary and all that. However, I did find it amusing to find one of the noisiest, recorded-in-the-red recordings ever made released on the new uber high resolution audio-only Blu-ray Disc format, especially so early on in  the platform's existence. 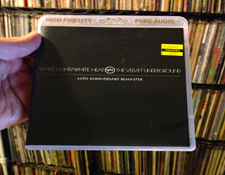 Honestly, of all the VU albums to issue, this is a very odd choice as a showcase for dynamics and musicality. White Light/White Heat IS a dynamic album all right, but when I think of audiophiles and the kind of music they veer toward, this is not the first album I would suggest they check out. Don't get me wrong: Lou Reed was an audiophile geek himself, so I know there was much attention to sonics paid on later releases. And attention was paid to sonics in the making of this album, but the resultant recording was more about producer Tom Wilson's ability to keep it from being a completely distorted train wreck than creating an audiophile masterpiece.

Yeah, yeah, I hear you in the back of the room chirping up that White Light/White Heat  IS an audiophile masterpiece. I get it. After all, this recording is all about over-saturated analog tape and levels pushed to their limit. It is really cool. It is a defining moment in rock and roll and quite possibly the grand daddy of punk. 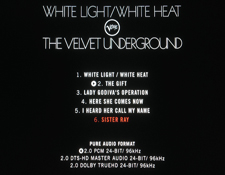 However, no amount of downtown cool can get me around the counter-intuitive notion behinds releasing this on album on Blu-ray, in three uncompressed audio, two-channel stereo formats at 24-bit, 96 kHz (PCM, DTS-HD Master Audio and Dolby TrueHD).  I mean, yeah, it sounds great and with a bit more definition than the original LP.  The sound IS gorgeous on the album's one slower tune, "Here She Comes Now," with beautiful detailing of the signature guitar hook and Mo Tucker's playing (including a ride cymbal!).

For the most part, however, White Light/White Heat stays in proto-punk rock mode, with the band playing at full bore, amps turned up to 11. Distortion, amplifier and guitar tones and a live room sound is what this recording is about, a bold statement that bombed commercially back in the day but went on to influence generations of musicians and bands.

The question remains: do we need to spend $30 on this with no real bonus material? In my heart of hearts, as geeky-cool as it might be to own this, I can't really answer that question with a resounding yes.

Sure, if you find it cheap or used like I did, grab it. Be forewarned that it is great sounding but ultimately weak product offering (it doesn't even attempt to reproduce the original black-on-black skull artwork on the cover!).  Certainly with all that extra space on the disc they could have given the fans mono mixes, alternate takes, live tracks and other stuff that came on the corresponding commemorative 45th Anniversary three CD set.

This is still a curious one to find released as a two channel stereo Blu-ray Audio-only disc. Those of you who have great taste in hard rock music plus an appreciation for the absurd will want to own a copy of The Velvet Underground's White Light/White Heat on Blu-ray disc.

I do wish, however, that they had taken the time to try and remix this into 5.1 surround, to open up the mix a bit so you could really get immersed in the majesty of the band's epic howl?  That would be really something! Can you imagine being effectively put in the room with the band while they are playing Sister Ray?  THAT would be a dynamic sonic experience ...

Which reminds me, I need to look for the quadrophonic remix of Lou Reed's Metal Machine Music which was released several years ago on Blu-ray.