I grappled with this review for a while because I had to consider the audience here at Audiophilereview.com.  I mean... most of the records being reviewed in today's article probably were recorded digitally or were quasi-lo-fi analog affairs in the first place featuring snarling shredding electric guitars, raw vocals and pounding drums.

That doesn't necessarily make them unworthy of your consideration... 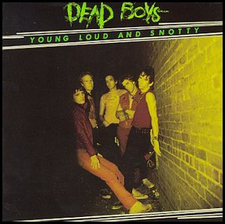 There is some fine fine hard rockin' music here and I have to think that there are more than a few audiophiles out there who still like to crank up their $100K sound systems with something other than Jazz at the Pawn Shop (or choose your favorite made-for-audiophiles type release).

So, here we have new and recent releases from a few different bands you may or may not know about. Either way, they are making some fun music and may be just the jolt of caffeine you need to kickstart your day.

YOUNG, LOUD AND... FROM CLEVELAND

The notion of putting one of the earliest punk records on audiophile vinyl is the stuff that makes more than a few audiophiles snicker...  Rhino doesn't bother with that detail on this -- and doesn't disappoint either with their -- fairly recent reissue of The Dead Boys' legendary first album Young Loud and Snotty. Issued on standard weight translucent green vinyl, it still sounds just great. I mean.... really... does an album like this really need to be on 180-gram vinyl?? I think not. Most of the mix is thrashy and technically mushy but that is half of the fun here!  The opening track -- the now-classic "Sonic Reducer" -- sounds bigger and punchier than most of the album. Proof that the producers could get some lively big sounds out of some of these not so Dead Boys! 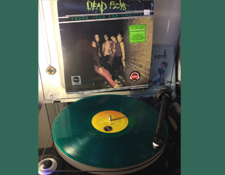 One of those albums I missed out on picking up back in the day, I've been surprised at how elusive it has been to find an original pressing of Young Loud and Snotty. You don't see it very often out in the used / collector shops and if you do it is either trashed or costs some hefty coin to purchase as a collectors item (punk memorabilia is highly collectible these days, in case you didn't know).  So a shiny new reissue from Rhino Records is seriously welcome. These guys could really play and it was produced by Genya Ravan, so it has some production aesthetic without losing the essence of what the band was about.

Really, they were pop-punkers.  And that is the thing I like about The Dead Boys.  Like singer Stiv Bator's later first solo album, there is a strong sense of hooks and melodies amidst the guitar roar.

OLDER, WISER, OUT AND PROUD

I've known some of the guys in Pansy Division for many years and have even played shows in my old band opening for them. Fun and fine songwriters with an important voice for everyone who may feel a bit on the outside of mainstream society,they are an openly out and proud Gay rock band, in case you didn't know. 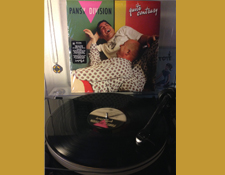 Listening to their new album Quite Contrary out now on Jello Biafra's legendary Alternative Tentacles Records label (Dead Kennedys, The Dicks, Black Kali Ma, etc.), I am hearing songs with strong universal messages. From the desire to not be oppressed by one faith over another with an alternate agenda ("Blame The Bible") to songs about broken relationships (the heart wrenching "Something Beautiful") and love (the fine power pop gem "Love Came Along"). "You're On The Phone" could have easily fit on the last album by The dBs.

They even strip down The Pet Shop Boys' dance floor hit "It's A Sin," rocking it out with a truer angst and energy the song demands.

One of the stand out tracks that resonated most for me comes near the end of the album, a powerful opus of outrage over the commonplace lack of courtesy circulating today called "Too Much To Ask."

"Are we a bunch of babies

Are we a bunch of flakes

Been blown off so many times

How much more can I take?

To merely keep your word, is that too hard a task?

Are all these simple things too much to ask?"

Great stuff, kids.  Pansy Division's Quite Contrary comes on thick, dark, well centered black vinyl that sounds real fine, complete a free MP3 download. You can get Pansy Division's new album at your favorite brick and mortar retail music store, online at Amazon or from the band's website or even direct from Alternative Tentacles.