I have been waiting for a record like this to come out for some time... 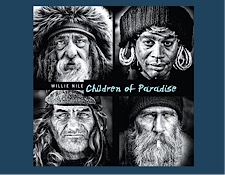 The new record by Willie Nile called Children of Paradise is a classic American rock experience. The key thing here is his message: Nile is ringing a loud and clear Liberty Bell of passion, reason and protest, calling out the harsh negativity enveloping our country today.

Nile explains the genesis of this theme in the official press release supporting this album:  "It's so utterly disheartening to people of good will everywhere, and there comes a time to stand up and fight back. Writing these songs was my way of doing that. There are plenty of decent people everywhere, but with all the lies and distortions told by so many in power it gets confusing and it's hard to know who to believe and which end is up. But I believe in the basic goodness of most people, and that's where these songs come from."

For those not familiar with Willie Nile a little history lesson is in order: he burst on the New York music scene in the late 1970s as part of a wave of post-Springsteen (if you will) roots rock signings with two albums released on Arista Records (in 1980 and 1981). Both recordings were heartfelt (and critically acclaimed as I remember). I liked these albums a lot in college and always wondered why Willie never got bigger. He was poised for big time success and even opened for The Who in 1980! 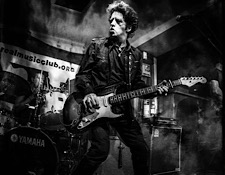 In recent years Willy has become increasingly prolific, releasing a wave of fine albums and his latest is no exception. Produced by Nile and Grammy-winning producer Stewart Lerman, Children of Paradise album has a classic rock 'n' roll vibe, rich with electric and acoustic guitars, big round drums, slashing cymbals and tight harmonies. Willie Nile has a distinctive voice that falls somewhere in the grand spaces between Bob Dylan, Bruce Springsteen, Joe Strummer, Rod Stewart, Ian Matthews and maybe even a little bit of Graham Nash.

At the end of the day its Willie's words and music that matter most and this album has no shortage of poignant anthems including the inspiring, fist-raising opening track "Seeds of a Revolution" :

"They come Bethlehem, they come from Mars

They come from the cotton fields and Christopher Street bars

They come from the land of need, washed upon the shore.

Like me they come from far and wide to knock upon your door....

"No more with the whips and chains, not more the gun

The tender kiss that freedom brings belongs to everyone." 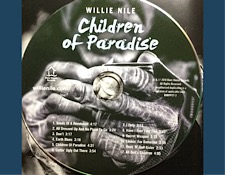 "Earth Blues" documents the plight of our planet in no uncertain terms. "Don't" also kicks back at the establishment with the T-Shirt and Bumpersticker-worthy slogan "Don't let the ****ers kill your buzz."  "Gettin' Ugly Out There" also reassures as much as it riles, underscoring the notion that if you think the times are weird out there, you are not alone in that feeling.

Children of Paradise's character studies are not all politically driven and between tales of life's trials and tribulations Willie offers hope. The closing track feels almost Gospel-like:

All of the losers one day will be winners

Sing for the nameless ones hungry and downhearted

Sing so the peacemakers can finish what they started."

Children of Paradise is a complete artistic statement right down to the cover art. Nile explains that the mesmerizing portraits comprising the album's cover and booklet"are of people in my Greenwich Village neighborhood, by the great Italian photographer Cristina Arrigoni. Some are homeless, some are not. They are on the outside fringes of society but they're all the children of paradise, as are all of us. Cristina brings out a dignity in them that is beautiful, deep and moving."

I think you get the idea that Willie Nile is an artist with a message, a man on a mission. I'll wrap up with the final line from "I Defy": "I hope you hear this loud and clear."

Children of Paradise will be out in late July. It is being promoted via a Pledgemusic campaign and is not yet up on Tidal. I reviewed this album from a pre-release CD that sounds great and rocked real nicely both in the car and on the home stereo (good sounding CDs can happen!). 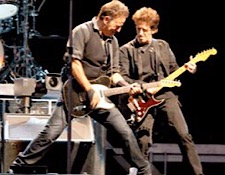 Several of Willie's earlier albums are up on Tidal if you have a subscription (note: click through hyperlinks embedded in these following titles to get to them directly) including a gorgeous piano-only album from 2015 called If I Was A River, 2016's World War Willie and my point of re-entry on Willie's music, the fine American Ride from 2013 which I reviewed here on Audiophilereview (click here for a link to it).

Willie Nile has a lot to say and clearly some great songs in his back pocket. You just need to listen. If you have even a bit of conscience remaining, you should listen to Willie's albums of the last 10 years or so. You might just get inspired by his 21st century renaissance.