When I first started getting more serious about my interactions with all things "social media" several years back, I began exploring various music enthusiast groups on the different platforms.  Ultimately, my journey narrowed its focus to a handful of quite active groups on Facebook -- and by "active," I mean that people are actually participating and interacting with one another vs. just posting things and walking away. Wonder of wonders -- there is a social aspect to social media after all (but you do have to look for it!). People on some of these groups really read the stuff you post and will often contact you within the discussion "threads" or sometimes directly via personal messages. 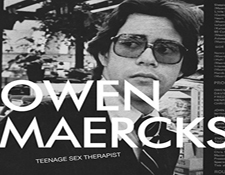 I've met some kindred music spirits there from around the world, especially in the record collecting and audiophile oriented groups where vinyl and hi fi geeks commiserate side-by-side, sharing pictures of their gear, new purchases (on vinyl, SACD, Blu-ray, downloads and even old 78s!) and other related trivia. Its all good fun and often useful in terms of getting hipped to new music and cool releases which one might otherwise miss out on.

Along the way there, I noticed some posts popping up periodically from a particularly heavy-seeming vinyl enthusiast who shared pictures of his colossal collection that dwarfed my sizable archive -- and those of you who are familiar with my background know I've got a pretty respectable batch of music here, both in content and size.

Not that size necessarily matters, but among collectors there is a certain amount of respect which occurs when someone gingerly pulls out impossibly obscure and highly gems.  I have thankfully felt quite welcomed in this community (note: thanks in particular to NHA, Present Listening and YouTube Vinyl Community!) and have even received kudos from some of these collectors for obscurities I've shared with this universe (We are everywhere!). 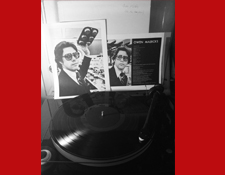 So, anyhow, that aforementioned heavy collector is a fellow named Owen Maercks and shortly after I began actively following his updates and eclectic tastes in music and sound, I soon started seeing posts from others in the groups who were playing a new record made by Mr. Maercks.   People almost universally raved about this album -- called Teenage Sex Therapist -- not only for its timeless, futuristic proto-New Wave (if you will) art rock sounds, but also the presence of some fairly legendary players on it (more on that later). As I read about his album, I was surprised to find out that this album was not only a new reissue-of-sorts, it was actually the first formal full scale release of his album which was recorded in the late 70s in the San Francisco Bay Area.

Note to self, I thought: pick up this record when you can, if only to show support to a fellow musician and record collector but also perhaps with an eye to possibly reviewing it here on Audiophilereview.com

Time passed, yet that mental note remained in the back of my head like some Post It From Hell, prodding me to get Owen's album next time I see it or break down and order it online. I almost began to feel almost guilty after several nice interactions with him on Facebook on topics ranging from an obscure record or two I had which he hadn't even seen before to... well... reptiles (he's a specialist in all things reptilian these days!).

So, imagine my surprise when about a month ago I found myself at an estate sale which had advertised that it had some records for sale... and it was there that I found a copy of Owen's album! Not the new reissue -- the original, from 1978 which was only sent out to the industry.  My jaw sort of hit the floor while I was there in the sale perusing the two small boxes of amazing records -- I mean, it was the second day of the sale and the records were virtually untouched by the many people who had been there before me, leaving me to choose from rare Miles Davis albums, some obscure jazz fusion, northern soul and afro beat 45s and more.  None of the usual crate diggers I see at these sorts of sales had been here before me, clearly.

And there in my hand was an original promotional copy of Owen Maercks' LP-- which was un-named at the time, though the working title was Teenage Sex Therapist -- complete with photo copied press materials, in a plain white cover with the only identification being his name hand-written on the cover (with "Chris Muir, Henry Kaiser" listed underneath in parentheses). 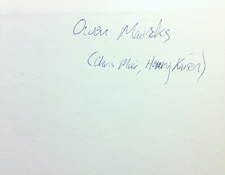 Yes, this is the same Henry Kaiser who subsequently recorded with no less than David Lindley as well as with the wonderful alternative music supergroup-of-sorts called French, Frith, Kaiser and Thompson.  He even played with The Grateful Dead and various members of the band over the years.  Speaking of The Dead, this album also includes John Oswald on one track playing alto sax ("60 Cycle Hum") -- the very same John Oswald who later would make a name for himself in international proto-mashup re-mix circles with his Plunderphonics releases including the amazing album Greyfolded, an authorized extended journey through hours of versions of The Grateful Dead's "Dark Star!"  Chris Muir plays electronic "guitars" (that is how he's listed on the album credits, folks!) and those of you familiar with his name know he is a force in the avant garde world, playing on the Yo Miles sessions with Kaiser (along other luminaries such as last Zappa stunt guitarist Mike Keneally and the great Zakir Hussein on Tabla -- wow, I really need to check this stuff out!)

So this record has some special sorts of DNA twisting in and around its being...

In just a few listens to Teenage Sex Therapist, I recognize this as some very complex pop music inspired by early Roxy Music, Frank Zappa, Captain Beefheart, Brian Eno's first several records (especially Here Comes The Warm Jets), Henry Cow, Be Bop Deluxe and a bunch of others.  When I say "pop" music, please note that this is not The Archies playing "Sugar, Sugar."  But these are definitely complex, tight songs, mostly of the under five minute length each of which weave and wobble with a snake-like charm that takes you on little journeys.  Given that Mr. Maercks is a guitarist and with Henry Kaiser's presence, the album is very much a guitar fan's wet dream.