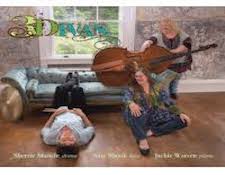 Try though I might, I cannot remember ever actually hearing anything by the 3 Divas, this despite their name being familiar to me. In their latest self titled released, they apply what can only be described as a joyous good time to seven covers of some well-known jazz standards and one or two you might not think of - like "Sunshine On My Shoulders" originally written by John Denver. With Sherrie Maricle on drums, Jackie Warren on piano and Amy Shook on bass, these three ladies present some interesting interpretations of both well known jazz standards and some music not considered traditional jazz. Track number two, the afore mentioned "Sunshine On My Shoulders," for instance, starts out with such a slow, melancholy bass intro, some may think about changing to the next selection. That would be a mistake. At about the time I was ready to hit "next," the tempo suddenly changed and almost immediately, I found myself tapping my foot to what is probably the liveliest version ever recorded of the very familiar John Denver song. All three of these women have had notable solo careers, as well as accomplishments with other artists. In May of 2014 their worlds collided at the Cleveland Playhouse and they immediately felt a kinship and have been together ever since. This is straight up, traditional jazz and one that I enjoyed from start to finish. 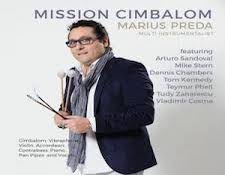 For those who like obscure instruments, the didgeridoo comes to mind, and for those who have never heard of, or ever even heard a Cimbalom, well, hang on to your hat. While it is largely unknown in North America, a Cimbalom is a type of chordophone with strings stretched across its top. It is basically a large trapezoidal box with strings, or put differently, it is a concert hammered dulcimer. But not quite. The strings are not plucked, as they might be on other stringed instruments, they are struck sometimes with a mallet, like a xylophone, and also, at times, with a spoon like instrument.  While I don't have any comparison artists to judge Preda's skill on the Cimbalom, if it is a difficult instrument to play, and I'm guessing it is, then Preda's virtuosity is all the more impressive. Having fallen for the Cimbalom at an early age in his native Romania, a country where it is not so uncommon, Preda offers a very unique twist on compositions by the likes of Oscar Peterson, Bill Evans and five works Preda composed himself. What I found so amazing about this release is the absolute mastery and the lighting like rapidity with which he is playing this instrument - and remember, if you happen to hear it, all this amazing music is being played with only one mallet, or "spoon" in each hand. This You Tube video shows Preda in action. Cuban born trumpet great Arturo Sandoval, who played on and produced the work, said of Preda, "Marius is a gift from God for our own enjoyment." If playing the Cimbalom is not enough, Preda also plays the violin, accordion, piano and gives a turn at singing. Despite the obscurity of this instrument, at least I suspect in North America, I thoroughly enjoyed this work by what is obviously a highly accomplished master at his craft. 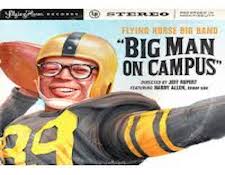 With a CD jacket that looks like a "Living Presence" album, and a CD that itself looks like an LP, I was not so sure what to expect of the latest from the University of Central Florida's Flying Horse Band. What this group of talented musicians has created is a swing band release in the best traditions of Benny Goodman and Glenn Miller.  All totaled, there are twenty credited musicians, with five on saxophone, four on trumpet, four on trombone, four in the rhythm section and three guest musicians on sax and percussion. There are covers of compositions by Henry Mancini, Judy Carmichael and my favorite track, "Raincheck," itself being a tribute to both Billy Strayhorn and Duke Ellington. Guest tenor sax soloist Jeff Rupert also composed and arranged, or co-composed and arranged, several of the twelve total tracks. Stylistically, this is big band, swing music, the kind (for those of you of the right age) your parents used to love to see and to which they would dance the night away. I found myself totally and completely enthralled with this work, tapping my foot and trying, albeit unsuccessfully, to stop turning up the volume. So put on your best suit, have your special someone get all dolled up, put this CD on your system, and be transported to a time when swing was king and big band was the best in all the land. Because "BMOC" is a complete triumph.