Listening to The Mavericks' Mono in Mono

I didn't quite believe it when I'd received the review copy of The Mavericks new album and saw it was titled Mono. I thought to myself, "nah, in 2015, no band of this stature would put out their new album mixed entirely into mono..." 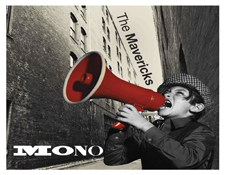 John Mellencamp was the last big name artist who I heard put out an album in monaural sound, but from what little I've read, I think that was more of a folky-roots Americana affair, not a whole rockin' band swingin' away in the studio ala Phil Spector or Brian Wilson.

I spot checked some reviews of The Mavericks' Mono album on-line. No mention of it being made in monaural. I checked the press release the PR people had sent me; good news of Grammy Award nominations (cool!) but no mention of a single channel mix. That is not a ding mind you! Just an observation. I have to recognize that non-stereo recordings aren't exactly a top priority for most folks these days...

Eventually I dug down into the band's current bio on their website, where drummer Paul Deakin is quoted explaining:

"As is often the case with The Mavericks' plans, the idea to mix the record in mono came about spontaneously. During the recording process we would go into the studio around noon and listen to vinyl records for some extra inspiration. At some point, someone noted that almost all of the recordings we were listening to were mixed in mono. Our producer Niko Bolas said, off-the-cuff, 'we should mix this record in mono.' And we thought, we can't get away with that - so of course ... we had to."

Bingo! There was just what I needed to read to convince me to take the next step in putting a different twist on this review. 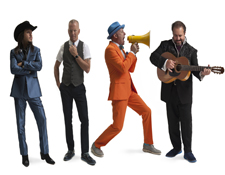 You see, Dear Readers...  You're reading this on Audiophilereview Dot Com and I know that there are a whole bunch of monaural music enthusiasts out there in audiophile-land, your humble scribe included. In fact, I recently purchased my first audiophile-grade monaural phono cartridge, the Denon DL-102 and I've been very excited by the initial results.

And while I won't get into all that geeky nuance here, I will say that I did hear a marked difference playing The Mavericks fine new album called Mono on a turntable outfitted with a monaural cartridge (versus playing it with a stereo cartridge).

I'll bet that if I had an entirely monaural HiFi set up -- from amplifier to a single speaker -- the listening experience would be that much more exciting.

As it stands, when I played Mono on two different stereo turntables I have (one with a Sumiko Pearl, the other with a Goldring 2400), the album sounded good, if a tad muted, requiring me to turn up the volume a bit to get more energy out of the playback. Initially, I took that to be part of the whole monaural flavor of the record which was done in live takes.

Next, I switched to the Denon mono cartridge and all of a sudden there was really clear definition of the sound coming dead center from between my monitors (JBL 4410As). That sort of blurring effect was actually a result of my playing Mono on a stereo cartridge... Suddenly, playing Mono in actual mono, everything became much sharper. 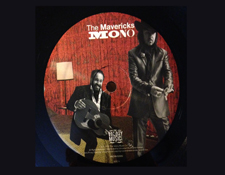 Now, this shouldn't sway you stereo lovers from buying the album -- it is no doubt a modern recording, compatible with stereo cartridges and a really fun listen. You'll be able to enjoy Mono on your stereo, just like people did in the late 60s when monaural and stereo record releases happened simultaneously (before mono was phased out, by around 1968 or so).

But.... but... playing Mono IN mono changes up the listening experience quite a bit.

The high end becomes more crystalline and precise. Somewhat swooshy cymbals become crisper high hat hits. Singer Raul Malo's voice jumps out of the speakers more like vintage Roy Orbison on Monument -- and face it, Mr. Malo's voice is a contender for that crown. In the monaural mix, the kick drum is clearly dead center, locked in with the bass. On a track like the rollicking Louis Prima-esque "Stories We Could Tell," you get this nice sense of soundstage so the organ is very clearly in the back of the room. On "The Only Question Is" the strummy acoustic guitars suddenly become more apparent as is the ringing of drummer Paul Deakin's ride cymbal work -- his crash cymbal accents are are also more pronounced.

Now, I'm not sure if this album was recorded in an analog form and given some some of the somewhat angular sonics I'm hearing, I suspect it was done digitally or at least processed digitally somewhere along the line. But, again, that isn't necessarily a bad thing and the LP playback process warms things up a bunch (especially if you have a tube pre amp of some sort). I haven't heard this on CD but I could imagine things getting a little crunchy depending on how much compression was applied in mastering coupled with the preparation of the 16-bit, 44.1 kHz Red Book standard CD duplication master. Something some of you may want to consider...

Musically, the album is a classic Mavericks melange of Country-fried twists on good old American Rock 'n Roll ..... 'n Soul ... 'n Ska...  Ok, so the Ska part isn't purely American.... Although... you know, now that I think about it, the way they put down those grooves feels a bit more New Orleans flavored to my ear -- ala Frankie Ford's "Sea Cruise" or Huey Piano Smith's "Doncha Just Know It" -- than, say, an early 60s Ska single by Delroy Wilson...

Whatever it is, that diversity is part of the joy of The Mavericks, a band renown for giving their audiences a great get down and party time.

Like LA's Los Lobos, The Mavericks are about purity of music, playing in the moment and making timeless sounds. Boy, what a double bill that would be seeing both of those bands together!

Ok, so here is another cool thing I just discovered about this album while poking around on Amazon: you can get this well pressed, thick vinyl (probably 180-gram) LP for less than $20 (I saw it going for $15, actually, but I'm not sure what price it will be by the time this review appears).

Check it out and grab a copy while you can...