Jeff Buckley Vinyl : You And I

This "new" Jeff Buckley album -- called You and I -- is great. It is essential even for the serious Buckley fan. The pressing on 180-gram audiophile-worthy vinyl is nice, thick dark black, quiet and well centered and the recordings sound sublime.  These are the first studio sessions by the artist made just at the start of his brief ascent to legend, then newly signed to Columbia Records. 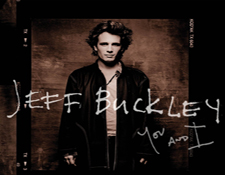 Now... I recognize that this album came out in early 2016, so you may be wondering why it took me more than a year to even buy the album?  That answer is simple: price.

For an album of about an hour of music comprised of solo guitar and vocal recordings done as basically a demo, it felt to me -- at the time -- like fans were being taken advantage. I personally could not imagine this seemingly bare-bones album needing to be priced at nearly $40 retail.  Apart from the album art, 180-gram vinyl pressing costs and royalties to the songwriters covered here (only two Buckley originals existed at this point in his career), I couldn't really see why it was so expensive. There was no significant remixing likely necessary. Mastering costs had to be fairly minimal -- this wasn't going to be a big radio hit thing.

I suspect other fans had similar concerns and thus I don't know any one who bought this album on vinyl (or CD either for that matter!). You And I sort of came and went.

Well... a month or so back, Popmarket.com had a one day sale of which I took advantage -- so I got the album for $20 which is MUCH more in keeping where this album should have been priced in the first place!  And... it is selling for that price on Amazon now (click here for that link)!

So that is what prompted me to write up this review now, a year and a half after its release... 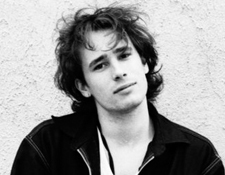 There is no question about the importance of the music on this collection. Besides lovely covers of Dylan's "Just Like A Woman" and Sly Stone's "Everyday People" -- again this is just Jeff singing playing a solo stripped set mostly on electric or acoustic guitar -- you get a haunting early glimpse at the song which became the title of his sole album released in his life time, "Grace."

When he sings "I am not afraid to die..." it really hits home knowing the tragic turn which life dealt him...

"And the rain is falling and I believe

My time has come

It reminds me of the pain I might leave

Jeez.... he was just starting out and already was being chased by ominous visions.  When you listen to the studio versions and any of the full band live versions of this amazing song, it is easy to gloss over Jeff's lyrics. Since this is essentially a demo recording, Jeff's vocals are up higher in the mix so you can hear every word very clearly. Perhaps even more so than the fine Live at Sin-é solo album, you can really feel Jeff's essence oozing out of the speaker here -- a young voice with an old soul and a heart of a tortured angel, mature and spectacular. His version of "Calling You" by Jevetta Steele is a stunner (I'd never heard of her before so I'll be looking into her music real soon!).

There is one previously unreleased song of a sort which is tale about a dream Jeff had (the title track, which is in fact called "Dream of You and I"). I won't spoil the impact of hearing that yourself, but rest assured it is poignant. 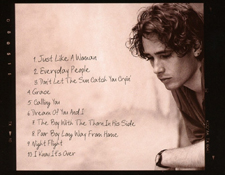 Wrapping up, I must address the inevitable audiophile question of choice regarding this (and many recordings from the late '80s and beyond, for that matter): do you "need" to own You and I on vinyl?  Well... that depends on your perspective. On one hand, it is worth noting that much of the album was recorded in 1993 with Neumann U-47 microphones, Neve mic preamps and Jeff is playing his Telecaster electric guitar through a 1965 Fender Super Reverb amplifier... and then there is the listed Guild F-50 acoustic in the album credits ... But... consider that some of this buzz-worthy vintage sonic goodness was -- according to the liner notes -- captured on Digital Audio Tape (aka "DAT," albeit a Panasonic professional model, the SV 3700). As this was a pro grade DAT machine, it could sample as high as 48 kHz ; so, while we don't know for sure, lets "assume" that it was recorded at the highest possible settings (it would still be 16-bit resolution, as that was all that existed at that time -- 24-bit was still a ways off).  For some of you, that difference between 44.1 and 48 kHz might make this vinyl pressing more appealing than a standard CD; for some of you, the whole 16-bit thing may be a deal breaker.

Overall, given the generally high standard this was made at, You And I honestly sounds quite good, with very little in the way of harsh digital edginess. It is not that kind of digital recording and using Neuman mics and all that means that they captured some very high quality sounds. There are three songs recorded at Bearsville Studios in Woodstock, NY so perhaps those were done in an analog form (the album notes do not specify but it does sort of imply by omission that it was "mixed," so perhaps those songs were recorded on a multi-track of some sort in higher resolution still).

For some of you reading, this information may appear to be splitting hairs but it is a big deal for many audiophiles so I need to bring it up -- this is Audiophilereview.com, after all! Thank you for your patience, Dear Readers!