Beatles in Mono: The New Benchmark (Part I)

I have to start this review with a round of heartfelt applause for the folks at Capitol/EMI/Universal for going the extra mile to make sure this boxed set of original Monaural recordings by The Beatles was done right this time around. They tipped their hat back when the Mono box came out on CD several years back, as that was a significantly better package -- and listening experience -- than the Stereo counterpart they issued at that time. 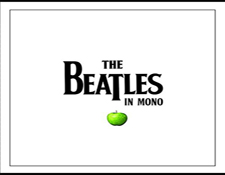 The Mono CD box went to great lengths to recreate the look and feel of the original releases right down to the special folded-over construction of the covers (which is how they were in the UK back in the day). More importantly, they offered up an uncompressed presentation of the audio on the CDs -- that is, the master tapes used did not have the additional compression necessitated for keeping the grooves from getting too wide range (which playback devices of the day would have otherwise have trouble tracking). That box set sounded pretty remarkable, especially since it was on CD after all (which inherently forces all music to be chopped down to 16 bits and all that). That said, the stage was set pretty high for this LP equivalent three years down the road -- we expected equal or better treatment still for the Mono vinyl reissues.

I'm sure they heard some of the fan and audiophile complaints over the manner in which the Stereo LP set was created -- I didn't even bother buying any of those due to all the negative stuff I was hearing from friends and reading about online. I decided to skip that wave hoping for better things with the Mono set.

Thankfully, the powers that be listened to the fans and have done it up right, giving us -- the ones who are likely to buy these kinds of things -- pretty much exactly what we wanted with fairly exacting accuracy. They have been very smart, alerting fans to the differences up front, so there are no surprises (so really, there is thus no room for any real griping folks!). For example, the insert with Sgt. Pepper details that "the packaging of this album replicates, as closely as possible, the artwork and construction of the original LP released in June 1967. Some of the copyright information has changed since then. The revised information is listed here and on the labels of the disc."

That is so totally honest and fair, it diffuses any need for any of us to really grump. Smart move!

To their point, indeed if you compare this new Sgt. Pepper to the original copies the cover is slightly different in that it does not have the sort of laminated plastic covering that made it nice and shiny back in the day -- these new ones are no less shiny, but they are made of a more contemporary oaktag type cardboard and the printing process was probably different as well, so there was no need for the laminated sheen. The only thing missing is that they did not reproduce all of the early period-accurate inner sleeves (as they charmingly did on the Mono CD set).You do get the red Sgt. Pepper one and the black sleeves for The White Album.

(This is as far as I suspect I'll be going on in the splitting hairs department, folks).

Anyhow, enough about cosmetics. Lets look at how this thing sounds....

Before I unpacked my box set I put on one of my original UK pressings of Sgt. Pepper to refresh my memory because that is where I planned to start my listening experience -- smack dab in the middle of The Beatles ascension to legend. Now, my copy of that LP always sounded pretty great, especially for a pressing manufactured about 40 years ago which has seen a fair amount of play over the years.

Happily, the new LP of Sgt. Pepper in Mono sounds pretty much just like the original only a bit better, if that is possible.

Well, first off the new pressings are dead quiet and perfectly centered. Absolutely silent entry to the music, which just jumps out of the speakers.

"This album was cut for vinyl from the original master tapes by using a completely analogue signal path and with constant reference to the notes made by the cutting engineer for the first pressing of the LP. It has been made with current technology and without imposing the restrictions necessitated by the limitations of record plays in the 1960s. Consequently this version reveals more of the content of the audio on the master tapes."

Indeed, I have to admit I am hearing details with a sense of clarity I have never quite heard before from this Mono Pepper, such as the spoken comments just as the Sgt. Pepper reprise kicks in. The Indian percussion and instrumentation on George Harrison's "Within You Without You" is spectacular.