Record Store Day 2014 wasn't quite as exciting as past years but there were some cool things which I was able to pick up with remarkable ease and at non-wallet-bleeding prices. And you can still find these around, so I thought you might want to check them out: 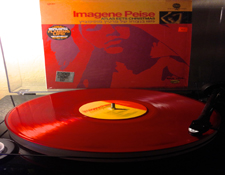 Imagene Peise: This album is credited to a Imagene Peise, an imaginary woman from Tikrit, Iraq "rumored to be just 18 at the time of this recording ... her extraordinary talent as a master jazz pianist at such a young age should put her in the realm of stellar." And so go the liner notes in this fine post-whatever modern holiday jazz pop classic from our friends The Flaming Lips, probably most notably their meister-musician Steven Drozd, whose etherial sonic stamp is all over this one. All that aside, it is actually a very enjoyable listen. Imagine taking Vince Guaraldi-style arrangements of traditional Christmas faire (a la the Charlie Brown Christmas TV special soundtrack) and complement them with sitar and some synthesized string sections. Wonderwall Music meets A Miracle on 34th Street? Add a bed of scratchy sounds to make this sound like an old recording and you've got the perfect tunes for nurturing that morning after holiday hangover. Seriously, its nice stuff. You sort of hear Flaming Lips singer Wayne Coyne on "Atlas Eets Christmas" (get it? "At Last It's Christmas"), a tune which was issued on a limited edition 12-inch single in a fully blown-out version done with Yoko Ono & The Plastic Ono Band (think of it as a sequel of sort to John & Yoko's now-classic "Happy Xmas." Fun stuff and if you have always wanted another record of holiday instrepection to play alongside your Charlie Brown Christmas album, this might just be it. 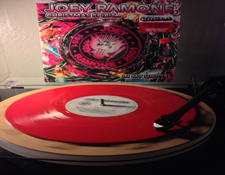 Christmas Spirit In My House: This 10-inch Santa-suit-red mini LP from the late Joey Ramone is a charmer and a heartbreaker at the same time. Worth the price of admission just to hear him do a quite perfectly paced version of the Phil Spector classic "Christmas (Baby Please Come Home)" with Ronnie Spector herself! Some of the songs you may have heard in other incarnations previously, such as "Merry Christmas (I Don't Want to Fight Tonight)" which The Ramones did in their own inimitable style back in the day. Some of the tracks on this disc were previously released on an album that Joey was working on when he died in 2001, released the following year including a chugging Ramones-esque version of "What A Wonderful World" which appeared in several movies. Handy to have all these prime tracks in one handy spot on cheery holiday flavored vinyl. 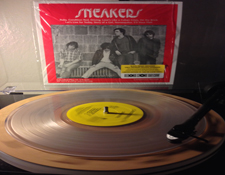 Sneakers: OK, so this one isn't a Christmas record and it is not on red vinyl (but it contains a song called "Condition Red"). But it sure is a holiday gift to the fans from its creators which include future members of the dBs and Let's Active and soon-to-be super producers Don Dixon and Mitch Easter. This is one of those groups that put out one album (in 1978) and disappeared as the various members split to pursue the dream bands and career paths that would put them on the pop music history map. Before that one album they put out a 10-inch EP in 1976 and that is what we have in our hands here, a loving reissue of the full six-song disc, pressed on thick well centered dead quiet clear vinyl and supplemented by several unreleased tracks. Those tracks include a killer cover of The Grass Roots' "Live For Today." Now of course I have to find that original Sneakers LP which, along with this, I had completely missed in the past. Always something new to discover! If you like the dBs, the Flamin' Groovies (whose 1968 debut 10-inch EP was named Sneakers, by the way, for those of you who like conceptual continuity trivia), Big Star, The Bongos, The Raspberries and early REM, you probably want to pick this one up.

So, yeah, Christmas came a bit early this year on Record Store Day. Fear not, if you look around you can still probably find these gems in the stores online.

Have yourself a merry pop-filled holiday season!