Would it be enough to make you want to buy a DVD of an artist if the primary impetus is to witness the joy and wonderment on said artist's face up close and personal, performing alive without a net? 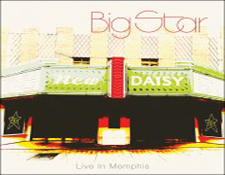 Would it matter to you if said artist had once been hugely popular, then became massively influential to several generations of future performers?

Would it matter if I reminded you that you will never get to see said artist performing live like this (at least in our current time and space continuum within the universe) because he passed away in 2010?

I certainly hope it matters to you because that is pretty much the case with regards to the new Big Star Live In Memphis DVD, out now from Omnivore.

Do buy Big Star Live In Memphis for the shear joy of seeing a fine performance by a hugely important rock band that many of us never got to see even when they reformed and toured again in the early 1990s.

Do buy Big Star Live In Memphis for the stellar songs and heartfelt performances.

Do buy Big Star Live In Memphis to see and hear a live version of Big Star co-founder Chris Bell's solo masterpiece "I Am The Cosmos" sung by Jon Auer of The Posies (who, with Ken Stringfellow, became crucial members of the reformed/reinvented Big Star).

DO buy Big Star Live In Memphis to see the joy and wonderment on the face of Big Star leader and co-founder Alex Chilton, who seems to be genuinely enjoying himself, grooving on playing his music before an adoring audience and clearly getting off on the vibe. 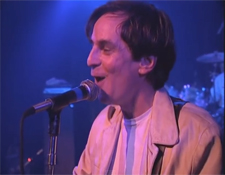 That is reason enough to want to see and own this video, because we get to see Chilton as a performer and consummate entertainer clearly doing what he likes doing in front of a sizable crowd. Watching this, one can't help but wonder how things might have been different had Big Star's first albums become big hits instead of falling victim to the star-making machinery and whims of an indifferent music industry of the mid-1970s.

Honestly, I never stopped to consider what a great guitarist Chilton was, but he pulls of his solos and those kinda complex-ish riffs so effortlessly. One is also reminded that this fellow was in fact a seasoned pro who had spent years touring as the lead behind the Box Tops in the 1960s ("The Letter," "Cry Like A Baby") as well as dedicating the first half of the '70s trying to get Big Star off the ground.