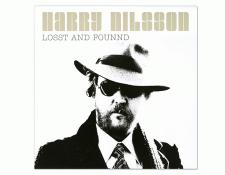 The prospect of a new Harry Nilsson record is both exciting and terrifying. Many casual fans have long written off Harry's late period albums because his voice had gotten raspy and what not. Personally I think those people are silly because he continued to put out some fine and fun music over the years even after that legendary session with John Lennon in 1974 where he did damage his vocal cords.

This new album out in late November from Omnivore Recordings -- called Losst and Founnd (that title is not a typo) -- would have been the first seriously solid album Harry put out since his 1970s heyday had he lived.*

On Losst and Founnd, Harry sounds really good and -- more importantly -- engaged in what he was doing with producer Mark Hudson. It's kind of tragic that this music stayed unfinished for 25 years but I'm happy to report the finished results are generally fabulous!! 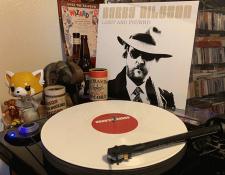 To appreciate Losst and Founnd it is important to have an open mind and an open heart -- so don't go into this experience comparing it to his brilliant Richard Perry-produced recordings of the early 70s because this is not that animal... Harry's voice is lower and richer here for sure, so don't expect to hear the angelic twinkle of his early hits like "Everybody's Talkin'" and "Without You."

If anything Losst and Founnd might be closer to albums like that wonderful and underrated Pussycats album Harry made with John Lennon in the mid-70s, but even that isn't quite a fair comparison. Losst and Founnd is its own thing. There are some legendary players on this including Jimmy Webb, Jim Keltner, Van Dyke Parks and Klaus Voorman. 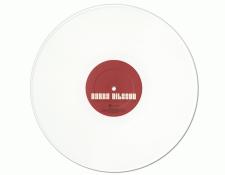 All that said, some of the songs that jumped out at me initially indeed do have some of that classic 1971 Nilsson Schmilsson vibe going on. Just put on "Love is the Answer" and the beautiful "Lullaby"to hear what I am talking about. I still haven't completely figured out what "U.C.L.A." is about but it seems to be his lighthearted version of what John Lennon did on his song "God," assessing the past while eyeing the future.

The final song on the album is written by Jimmy Webb who plays piano on it as well: "What Does a Woman See in a Man" is wonderful!  "Woman Oh Woman" is a lovely ode replete with gorgeous Brian Wilson-esque production flourishes and a Pet Sounds-like mid-section breakdown. The title track is a fun rocker that sounds like it might have been written for Tom Petty! 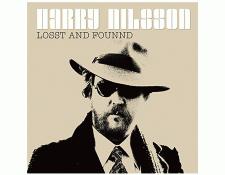 On CD, Losst and Founnd in general it sounds quite good -- great even in the car actually where I've done a lot of my initial listening. The album sounds quite a bit warmer on the nice, standard weight -- and pretty, white -- vinyl pressing. But again, don't expect the analog sparkle of Richard Perry's productions as this collection was likely assembled digitally across in several studios over the many years it took for producer Mark Hudson to complete this. The album should be streaming in CD quality on Tidal and Qobuz by the time the album is released later this month (click on those streaming service names for links to the album there).

So I suggest you just accept this album as the wondrous gift from beyond that it is, a chance to hear Harry Nilsson in a very positive and happy mode again, delivering a final album worthy of his legacy.

If you're a fan of Harry Nilsson you need to get Losst and Founnd.

* note: there was a "last" album issued in 1979 called Flash Harry which I don't even own believe it or not (!) but I have been listening to it a bit on Tidal (click here to jump to it if you have that service). It is not peak Nilsson, so set your expectations accordingly -- it didn't even get released in the US back in the day! But it has its charms... and, hey, its more Harry!