The 40th Anniversary edition of Frank Zappa's Orchestral Favorites album is as exciting as it is frustrating.  Exciting because we finally get to hear one of the full concerts from 1975 of Zappa performing with a custom-made 37 piece orchestra live.  Exciting because the remastering sounds great on the new single album release on vinyl and CD. 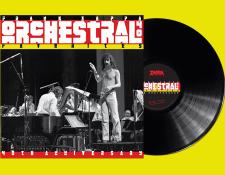 But... at least many of us who still appreciate his music can now geek out at the spectacle and wonderment of Frank Zappa leading a big orchestra live without a net. This was a project he wanted to do simply because he had all this music he had written and hiring an orchestra was the only way to "hear" it back then (MIDI technology was still a good 10 years away with the early Synclaviar system, which Zappa embraced deeply). The profits made from the hit single version of "Don't Eat The Yellow Snow" went into the making of these recordings.

In some ways I can understand why this live concert version of Orchestral Favorites material laid dormant in "The Vault" for so many years. There are parts of it which -- by FZ standards -- even I can hear how he would have found them too rough.  But there in lies the charm of this release: a palpable spirit underlies all that looseness! 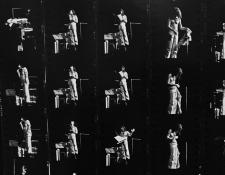 On discs two and three of the deluxe CD set you get the entire September 18th, 1975 performance. It is Zappa at his charming best, leading his "Abnuceals Emuukha Electric Symphony Orchestra" through some of his most difficult music to date. And the musicians -- many of LA's finest session players including several alumni of past Zappa recordings and touring bands -- were into it, clearly.

Lets talk about the recording and the restoration for a moment: I was just reading the terrific, enlightening liner notes by Vaultmeister and co-producer of this package, Joe Travers.

So, apparently, when Zappa provided the Orchestral Favorites tapes to Warner Brothers as part of the contractual obligation mess at the time, he apparently had not given them the "master tone reel" which is used to properly align the tape machines for playback. So for the first time, the producers have found the master tone reel and now everything is sounding arguably the best its ever sounded. High resolution digital transfers of the original tapes were mastered for digital by Bob Ludwig and Bernie Grundman for the vinyl release.

Drummer Terry Bozzio provides incredible insight into the making of these recordings and the concerts, also in the liner notes. So getting some form of the physical package is pretty essential here folks. More on that in a moment. 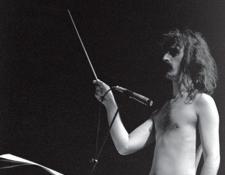 On the 40th Anniversary edition of Frank Zappa's Orchestral Favorites you will hear a bunch of songs that really should have been released while he was alive, such as the wonderful "Rollo."You'll hear "Revised Music For Low Budget Symphony Orchestra" and extracts from Lumpy Gravy.  I was thrilled to hear  the orchestral version of "Dog / Meat," a special medley of (non) "hits" from the Uncle Meat album ("The Dog Breath Variations" and "Uncle Meat: Main Title Theme"). And then there is the epic orchestral version of "The Adventures of Greggery Peccary" (which was released in very different form on the Studio Tan album).

You even get to hear the absolutely fascinating wonderful train wreck of a performance that is captured in this live recording of "Black Napkins." In it Zappa engages the 37 piece orchestra to jam -- yes, an orchestra jamming -- on a new song they'd never played before before a live audience. Granted, it is just two chords but it is amazing to hear how Zappa instructs the various musicians on which notes and keys they should play in... all on the fly!  It is utterly gobsmacking (at least to me) to hear his musical mind working so precise and like clockwork live on stage in front of an audience! Much of that version of the song works but of course things inevitably get a little wobbly as they all start to jam.  It is a "wooly" sort of cacophony... and I love it! 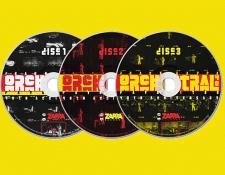 The whole concert recording sounds real good on CD, made from brand new 2019 mixes by Craig Parker Adams created off of the original 2-inch 24-track master tapes. You can also hear the album streaming in CD quality on Tidal (click here) and on Qobuz (click here).

And of course you can hear the newly remastered VINYL version of the album replete with new mastering by Bernie Grundman Mastering and 180 gram vinyl pressed at Furnace. This is the final version of the  Orchestral Favorites album that Zappa edited and overdubbed upon, so it is a different experience than the live recordings.

From Joe Travers' liner notes: "The album masters were completed in 1976 and are filled with a multitude of edits, some sections literally beats long. Its amazing to watch them going by during playback." 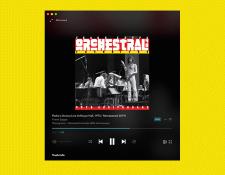 This is one more reason you need the 40th Anniversary edition of Frank Zappa's Orchestral Favorites: to hear the performances as they went down that fine day in September 1975 as well as the studio-enhanced creations he made.

The restored album sounds terrific with an ultimately more satisfying presentation of the music than the original. There is a nice high end sheen complementing the warm and inviting tones of the band orchestra. Zappa's guitar sounds especially fabulous on the orchestral version of "Duke of Prunes."

The instrumentation feels quite a bit tighter on this new version, so details like Terry Bozzio's kick drum hits are distinctive instead of the thumpy sound we heard on the original vinyl LP pressing. The low end is more focused as well, perhaps a bit more concise -- so when the bass player goes for sweet fills on "Duke of Prunes" you can hear more of the actual notes being played vs. just feeling them. It sounds less thuddy, if you will. 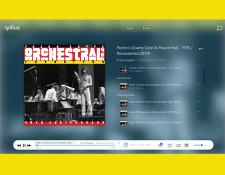 "Bogus Pomp" now sounds more like an actual classical release than a rock release with classical flavors thrown on top of if.

Of course, Zappa completists will groan as they have to get yet another version to keep in the collection. When Zappa issued this album on CD in the 90s he reconfigured the recording for that format so there is that unique version as well.

The new cover art is SO so so much better than the inappropriate art Warner Brothers had slapped on the record back in the day. So that is great to see and hear this package which comes with an album sized booklet including terrific photos of Zappa on stage.  They have even reproduced the full "contact sheet" of photo negatives which are much easier to see on the LP package than the CD edition (yeah, so you need both... you know you want them!). 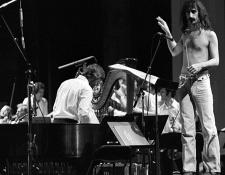 Terry Bozzio's liner notes are augmented by fun drawings of many of the players which he made back in the day.

If you like the original album you need to hear the 40th Anniversary edition of Frank Zappa's Orchestral Favorites to complement your experience at minimum on CD.  And if you liked the original LP a lot you probably will want to get the new vinyl version as it is a different listening experience.