The first thing I noticed when I put on the fine new live album by power pop legends The Raspberries was just how immediately amazing they sounded.  Both the fidelity and performances on this two-CD set -- recorded at the start of their reunion run at Cleveland's House of Blues, November 26th, 2004, the tour continuing for several years --  sound pretty stellar as CDs go. 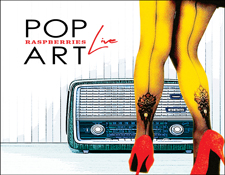 Perhaps too stellar, I wondered initially. Of course, in defense of the recording, I never got to see the Raspberries on these reunion tours so I recognize that I didn't really have a point of reference other than their studio recordings to judge this fine new release against. Up until now I had I'd never really bothered to look for live recordings of the band from their original early 1970s ascent.  My excuse (if you will) is that having heard early '70s live recordings by the The Raspberries' power pop peers such as Badfinger and Big Star, I just assumed that their live sound would be about the same -- thin and not representative of the grandiose sound they created in the studio.  I suppose I wasn't really expecting much...

Which is perhaps why this CD packed such a wallop from the get go.  I've subsequently been poking around on YouTube and checking out live recordings of the band from back in the day and they indeed were pulling off this stuff live with multi-part harmonies and such!   Couple that experience with the dramatic technological changes since the 1970s in terms of what a band can easily deliver on stage today --  take a listen to the spectacular live recordings of Brian Wilson's band doing Pet Sounds and SMiLE live in concert, for example -- and it suddenly makes total sense that this new Raspberries recording would sound so great. 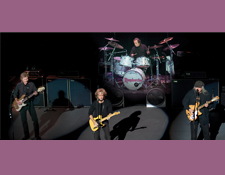 Lead singer Eric Carmen's voice can still reach the stars and the harmonies from the other band members are spot on. These 21st Century Raspberries shows were indeed done -- like Brian Wilson's band -- with live support from backing musicians charmingly named (in the album's credits) "The Overdubs."  So, there is no doubt the band knew that they would need some support beyond the original four members to pull off that big Phil Spector-Meets-Brian Wilson-Meets-Pete Townshend power pop studio sound on stage.  The result is wonderful! Kudos must also go out to Tommy Allen who mixed this recording. Check out a bit of it on this trailer for the album.

Much like the recent live Big Star Third concerts (which I reviewed here on Audiophilereview), Pop Art Live will probably become a great first step for a new generation of fans curious to hear what all the fuss is about surrounding The Raspberries. Older fans will certainly love the album which features all the expected hits, lots of deeper album cuts and many note-perfect covers (including three by The Beatles -- "Baby's In Black," "Ticket To Ride," and "No Reply" -- as well as The Who's "I Can't Explain").  They also do an early gem by The Choir, an Ohio band which became the core of The Raspberries when singer Eric Carmen joined forces with them; I first heard "Its Cold Outside" when it was covered by Stiv Bators in the late '70s (click here to hear Stiv's version and then over here for the original)! 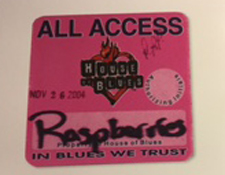 Anyhow, I guess the only question remaining really is why it took so long to put this out?  There was a live album previously issued from later shows on the reunion tour, but that is quite out of print and commanding collectors prices on places like Discogs and eBay. Pop Art Live is thus especially timely for those of us who want to hear this great band performing live in high fidelity (courtesy of the good folks at Omnivore Recordings).

If you are a fan of The Raspberries or just great melody-drenched rock 'n roll in general, you owe it to yourself to pick this one up. Its a great overview of the band and its roots, casting equal light on the other super talented band members -- especially lead guitarist / singer Wally Bryson -- as well as frontman Eric Carmen.

A special three-LP vinyl edition of Pop Art Live will be out in the Fall, initially on limited edition colored vinyl (as well as standard black).  As soon as I get my hands on that edition, I'll be sure to write up a follow on review of this fine album from that vantage point. Until then, this two CD set is going to have a happy home spinning on my mobile devices, in the car as well as on my regular home stereo.