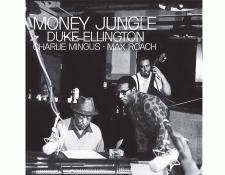 Long ago, before I was deeply into Duke Ellington, a friend suggested that I pick up one of his albums on Impulse Records called Live at the Whitney that had been issued on CD in the mid 1990s. He was recommending this this because he felt it offered a window into of Duke's best playing, not in his old big band style.

Years later -- after I had deeply immersed myself in Duke's catalog -- I understood what he was getting at regarding that particular album. It was not representative of Duke's work over the years -- which stretched from the mid-1920s until the early 1970s! -  but I did enjoy hearing Duke's piano front and center, which felt somehow a bit more contemporary. 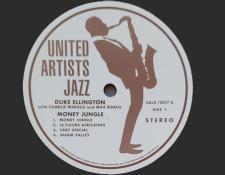 As I dove down into Duke's catalog these past 20 years I have found some wonderful mostly piano-centric recordings he did in the late 50s (Piano In The Foreground, Piano In The Background, etc.).  Most significantly, I fell in love with his first long form recordings from the dawn of the LP record format, albums which I consider some of his finest work: Ellington Uptown, Ellington Indigos and Masterpieces By Ellington.

One of Duke's more experimental early 1960s collaborative recordings has proven especially difficult to find  on vinyl over the years: Money Jungle, released by United Artists Records. Eventually I gave up worrying about finding the album on vinyl - - yes, "worrying," in a record collecting sense -- and picked up a copy on compact disc. 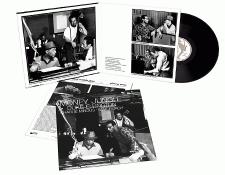 This was a perfectly fine solution for the interim, although it didn't present the music in the manner it was originally released; my version is filled with many outtakes and previously unreleased versions of songs from the sessions, which in some ways is better and cooler.

Yet, it is decidedly not the original album as it was released in 1963. Fortunately, that version of Money Jungle has been reissued on the great Tone Poet series of reissues via Universal Music's Blue Note Records imprint.

Money Jungle placed Duke in a rare trio setting with two of the more cutting-edge musicians of the times: Charles Mingus and Max Roach. Both of were influenced by Duke in many ways so they went into the sessions with a good idea of what to expect (in the early '50s Mingus had been fired from Ellington's band after just four days!). 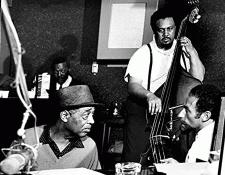 The resultant recording is quite fantastic and pretty much unlike anything else in Ellington's catalog. Going back to that original notion my friend had years ago, I think this record best showcases Ellington's artistic and technical facility as he rises to the challenge of working with these then-edgy musicians and commands center stage.

There is a palpable push-pull edge apparent here as Mingus and Roach try to drive the recordings. Duke fires back with some of the most "out" playing I've ever heard from him. If you know Duke Ellington's work, this recording is both immediately jaw-dropping and immensely satisfying. if you are not familiar with Duke's catalog, Money Jungle will simply sound like a badass session from the golden era of Jazz.

It is important to note that even though this is a Blue Note labeled reissue, Money Jungle does not "sound" like a Blue Note recording because... it's not! The recording has a certain boxed-in feeling. 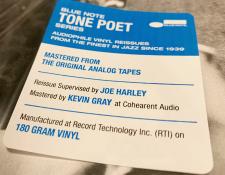 That's not to say that it doesn't sparkle -- it does -- but don't go into this expecting the richness of a vintage Prestige, Impulse or Blue Note records release as recorded by Rudy Van Gelder or a Columbia Records LP done by Teo Macero.

This version of Money Jungle was reportedly mastered from the original analog master tapes by Kevin Gray of Cohearant Audio. I suspect that some of that boxy sound is simply how the original recording was made. Money Jungle is all about the great performances, yet it is ultimately not an especially great sounding album. So to set your expectations accordingly, anticipate hearing some distortion at points, perhaps from an engineer caught off guard by the percussive, near violent playing on some of the tracks -- especially the title track! 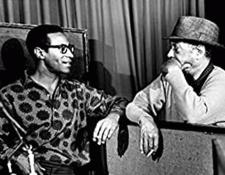 Save for a Plangent Processes level restoration, I suspect that this version of Money Jungle is about as good as the album will get fidelity wise. If you love these artists and this album and don't already have an original pressing, you'll probably wanna pick this one up.  The packaging is gorgeous and the pressing made at RTI is exemplary.