I finally figured out something about Caspian, the "post rock" band from the Boston area that I've been getting into the past couple of years. 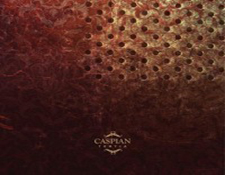 This band plays music that is mostly instrumental. It is not quite ambient music, but it has ambient tendencies. It is not quite rock but it certainly tends to rock rather righteously. There are no real guitar solos but they do feature a lot of electric guitar textures.

This is music that you can play late at night yet which won't lull you to sleep.  This is music you can trance out to but I don't know that I'd want to meditate to it. Caspian's is the music of a soundtrack to an unmade film of your inner worries and terrors, your external wins and triumphs.

Caspian sort of plays in the same sonic ballpark as Iceland's Sigur Ros, yet without Jonsi's haunting vocals.  But still that isn't quite enough to pin them down.

I'm still working on that one...

But I have learned one thing in exploring their 2009 second full length release called Tertia: it works best when you play it loud!

Don't get me wrong, it sounds OK at normal levels. But when you turn the album up loud, this music really comes alive.

Some records are mixed to be played loudly, from John Lennon's early solo single "Instant Karma" to The Cure's Disintegration, both of which bore instructions for the user/listener to PLAY LOUD. 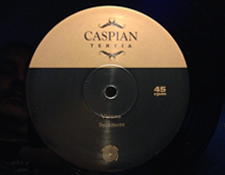 Caspian's Tertia definitely takes shape when you pump up the volume, with a big throbbing low end and warm, natural sounding drums percolating through the dense wall of sound that the band makes with its guitars and such. This was never more apparent then at the end of "Sycamore" when the tambourine cuts through like a knife through fog paving the way for the barrage of drums which close the album.

I tried this with their last album I bought, 2012's Waking Season and it had the same impact: Play Loud! Wham! There it is. That sound. That wall of sound.

And so it goes with Caspian records. True to past releases I have purchased by this band, the album pressing is dead quiet and well centered. This new one was on black vinyl but they have colored vinyl options available on their website -- some of the ones I've gotten in the past have been beautiful. 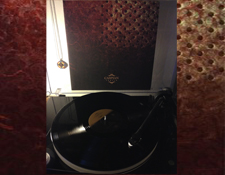 This album spins at 45 RPM but I will admit that I accidentally played it at 33 1/3 RPM the first time 'round and it sounds great too!  Its that kind of music!

But whatever you do, remember to pump up the volume and play it loud!