Here we'll continue my exploration of the newly, stunningly, all-analog-ly remastered / audiophile-pressed reissues of the seminal Monaural recordings by The Beatles. If you haven't read part one, please visit this link to read about my experiences listening to the new versions of Sgt. Pepper's Lonely Hearts Club Band, Magical Mystery Tour, Help and Please Please Me. In this portion we'll look at some of the core mid period albums issued between 1965 and 1968. 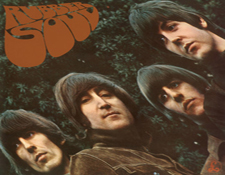 Rubber Soul may be my favorite of the remastered Mono LPs in the Beatles in Mono series of reissues. The first thing that got me about that listen is just how right it sounded. Yes, "right." It sounds like the album is supposed to sound, or -- perhaps more accurately -- how I remember it sounding growing up as a kid. Sure, I was listening to the Capitol Records version at the time, but it was a MONO version and that is the sound I grew accustomed to. I never quite got into the Stereo versions of Rubber Soul, try as I did over the years. I especially prefer the Mono mix of "Drive My Car" as it puts the cowbell into proper perspective (its way too in your face on the Stereo mix -- whenever I hear the Stereo mix, I expect Christopher Walken to come walking through the door demanding yet "a little more cowbell!"

Dead quiet vinyl, again, and the sides are perfectly centered.

Likewise, Revolver sounds just right too and it sounds even more right each time you start to nudge up the volume. What more can I say that you haven't heard already about this album? This is a perfect album presented as perfectly as possible. Ok, so the back cover art is not glossy like the original pressings. I can live with that. The US pressings of Revolver have always been non-glossy so I'm cool with that. This version sounds so full and rich. Collectors love this sort of thing because it means that the original pressing will retain some of their value and appeal. 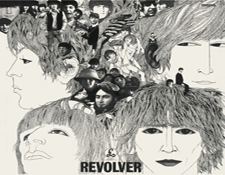 But seriously, this is one you'll really want to turn up the volume on your stereo and just bliss out as it fills the room with arguably some of the Beatles biggest musical leaps, from the opening jam of "Taxman" into the gorgeous lush strings of "Eleanor Rigby." "I'm Only Sleeping" is huge! Lennon's dreamy acoustic guitar tones are rich and warm, while in the breaks you can hear the sound of McCartney's amplifier tone in the studio. No pun intended, but you can make out ringing tone as Ringo's drum sticks hit the tom tom so clearly on "Tomorrow Never Knows" and also these nice tiny little tambourine parts here and there which I never really pinpointed previously. The detail on Harrison's "Love To You" is striking, as the Sitars and Tablas jump out of the speakers. I also noticed for the first time what sounds like a single punctuating handclap on the last chorus just before the final jam.

Its this kind of clarity we are privy to for the first time on these new masters.

Jumping ahead to The White Album, this is really a treat for us Beatle fans here in the USA as it was never released in Mono here. Accordingly, finding a vinyl copy of The White Album in Mono had always been a pricey affair here in the states (especially pre-eBay) IF you could even locate one. I rarely see them in stores to this day and when you do they are usually not exactly cheap. I got lucky years ago and found a playable copy at a flea market in Switzerland for about the equivalent of five dollars (sure, it had lots of surface scuffs but it played pretty clean and allowed me to at least finally hear the Mono mix).

While the new master is not as immediately bright sounding as my old copy, this new pressing again shines as start to push your amp a bit and turn up the volume.

Now this is one of the Beatles' albums that I've long questioned as to which version better, Mono or Stereo. You see, this was the first one The Beatles recorded on an 8-channel multi-track recorder which gave them more flexibility to create a satisfying Stereo mix. The Stereo mix which most of us in America grew up with sounded just ducky! As a Beatle completist, it was important to get the Mono mix to hear the differences I'd read about (some of which were highlighted on the "Rarities" collection which Capitol put out in the 1980s). The book that comes with The Beatles in Mono box set does a real nice job highlighting some of the differences.

At the end of the day, however, its about the music and most of the music on The White Album is sublime, be it in Mono or Stereo.