These days, with sound and vision around us 24/7 just a click away on the Interwebs, I am forever amazed at how little people actually know about the music they are listening to. Perhaps it is the lack of music classes in the schools these days or perhaps it is a case of information overload. Whatever is causing it, I'm here to try and help -- as the hep kidz say -- "edjumacate" you. 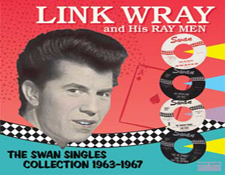 For example, the good folks over at Sundazed have put out some amazing collections over the years which when experienced end-to-end provide important updates on chunks of rock and roll history 101. And you learn about this not just from the music but also the frequently impeccably detailed liner notes (for those of you who still read) and in some instances audio interview segments (for those of you who don't read).

I recently picked up two of these killer collections which are enlightening listens that sound and look great (both on clear gold vinyl!) while filling important gaps in my collection and musical knowledge. 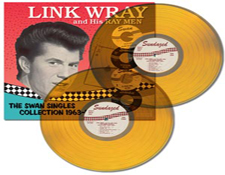 Link Wray is known to guitar aficionados as one of the architects of modern electric rock guitar playing -- power chords and tones most of us first heard on hard rock records by Led Zeppelin, The Who and Black Sabbath were actually pioneered year prior. The thing is, he was doing this wild, over-driven amp sound on recordings dating back to the 1950s, more or less beginning with his hit "Rumble." A grand two-LP set from Sundazed -- The Swan Singles Collection 1963-1967 -- documents all of Link's work for this Philadelphia-based label. Beatle fans will no doubt be familiar with Swan Records as it was one of the early companies to grab a piece of the golden ring, securing rights to issue the single "She Loves You" back in 1964 just before Beatlemania caught on full crazy like and everything was controlled by Capitol Records.

Swan had many artists delivering hits by the likes of Freddy Cannon and The Rockin' Rebels. Here are 26 sides comprising all of Link Wray's releases for the label including two unreleased tracks! They are pressed on two beautiful clear gold vinyl discs with a Swan-like design label. But at the end of the day its all about the music and fun and this set is chockfull of both! Crazy, amped up, wired-to-the-edge proto-psychedelic, proto-metal, proto-hard rock driving grooves and outta-sight guitar solos. Toe tappers that may well get you up and dancing around your living room include the cackling madness of "Run Chicken Run" and a hysterical take on the "Batman" theme. This music is like The Ventures sans one guitar and with the amps turned up to 11 after a long night of speeding on the highway to get to the next gig -- just crank up a tune like "Ace of Spades II" and you'll understand what I mean. This is vintage garage band rock 'n roll played really really well, with huge guitar and amplifier tones all presented in glorious Monaural sound off the original master tapes. This stuff will rock your hi fi in the best possible way.

When asked who first created the sound of surf music back in the early 1960s, most people automatically say The Beach Boys, and they wouldn't be 100% wrong. The reality is, however, the sound of surf and hot rod music that began to grace the airwaves just before the British Invasion and Beatlemania swept the nation in 1964, was crafted over time mostly by a group of young musicians in Southern California who were active in the local surf and car hot rod scene. Certainly, Brian Wilson and his brother Dennis were heavily involved in it -- Dennis being the only real surfer in the family! -- but there were other friends of theirs who drove the sound creation just as much in those early days including Jan & Dean, Dick Dale, Bruce Johnston (who later became a Beach Boy) & Terry Melcher (later a Byrds producer), various members of The Wrecking Crew (who played on most of the Phil Spector productions and many uncredited sessions) and a fellow named Gary Usher. 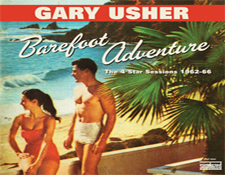 The latter is the subject of a great two LP set put out by Sundazed Records -- Barefoot Adventure -- compiling many of his sides issued on the Challenge Records label under names including The Sunsets and The Four Speeds (with Beach Boy Dennis Wilson on drums!). There are 36 tracks on this album including many unreleased demos and four interview segments with Usher himself (one per side) which adds a very appealing documentary sensibility to the album. Copious liner notes and rare photos round out this great collection from Sundazed. You can't go wrong with this one if you are a fan of early surf music and want to hear how a sound develops over time. From "R.P.M" to "The Chug-A-Lug" to tracks like "My Sting Ray" and "426 Super Stock" you'll get insight into the process this songwriter went through trying to find the magic blend of lyrics and sounds that would ultimately capture the public imagination. And for fans of Lou Reed, himself then a struggling songwriter on the East Coast in the early 60s, I can't help but be intrigued with an unreleased demo of a song called "Coney Island Wild Child" -- sonically the tune has more in common with the amphetamine rush of The Ramones, but it is sure a curious coincidence that Lou later wrote about "Coney Island Baby" and "Wild Child" in two songs in the 1970s.

Anyhow, there is a whole bunch of fun music here. So, what are you waiting for? The water is great! Come on in. Surf's up!